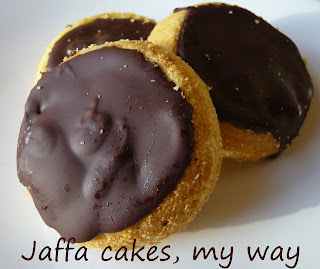 These are the result of another of those occasions where you think 'I must make these, and I must make them soon.' And so it happens! I had been watching Something for the Weekend on BBC iPlayer on catchup, and saw Simon Rimmer (who provides the interesting cooking parts of the programme - though actually, I do enjoy the rest of it too!) making homemade Jaffa cakes. I was intruiged, partly because although I quite like Jaffa cakes I never really buy them and partly because I hadn't really given much thought to the type of recipe required for the cakey-base part of them. Turns out it's a light fatless whisked sponge. Makes sense I suppose!

The original recipe can be found here, but this is certainly an occasion that I'm glad I watched the programme too and didn't just follow the recipe. The recipe says it makes 12 and I halved the recipe (after seeing how much mixture there was on the tv show) and still made 14!!! For me, Jaffa cakes must have the correct ratio of spongy layer to jammy jelly stuff to chocolate. If you follow his recipe your cake layer will be much thicker than mine, and I think it would have been disproportionate. I was pleased with the way my cakes turned out and thought they were the perfect thickness for jaffa cakes.

I did decide to cheat a little though - I didn't have time to make the proper jelly filling to make them more authentic, so decided to just go with marmalade on its own. I then decided to try blackcurrant jam too, rebel that I am! 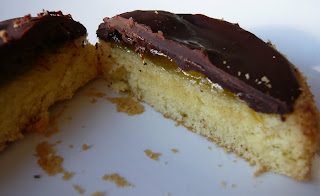 For topping:
Jam/marmalade of your choice (I think I probably used about 4 tbsp for all 14, but depends how much you like, of course)
100g plain chocolate (I used Lindt 70%), melted

Method:
- Preheat the oven to 180C/Gas 4. Grease your tins well - I did, and my cakes still stuck slightly! I used a 12 hole non-stick muffin tin, plus two silicone muffin moulds, because I had too much mixture.
- Suspend a heatproof bowl over a pan of simmering water (although I used just boiled and allowed it to cool as I was working - my hob is too far from a plug socket to do anything else!) without allowing it to touch the water. Add the sugar and eggs to the bowl and beat continuously for 4-5 minutes until the mixture is pale, fluffy and well combined.
- Add the flour, beating continuously, until a thick smooth batter forms.
- Pour into the greased muffin tin until they reach the height of base you want - I don't think the mixture puffs up very much in the oven.
- Bake for 8-10 minutes, or until pale golden-brown and cooked through (a skewer inserted in the centre comes out clean). Mine took longer than this.
- Remove from the oven and set aside, still in the tins until cool. When cool, loosen and remove. I needed to carefully run a knife around the edges of the cakes to release them.

I found that my cakes had created a natural dip on their lower sides, so I just filled this with jam/marmalade. I did half of mine orange marmalade and half blackcurrant jam. Carefully pour over the melted chocolate to cover the jam and allow to set. I stored mine in the fridge (hence the condensation on the pictures) because I made them a couple of weeks ago when it was really hot. This had the advantage of a lovely crispy chocolate layer contrasting with the soft cakey layer. Mmmmm.

I would recommend using silicone bakeware if you have it - the two 'overflow' cakes baked in the silicone muffin moulds turned out perfectly without sticking at all, whereas the others did stick to the tin slightly, but not enough to prevent them being released.

You can see from the picture below that using jam rather than jelly leads to a little jam weeping into the sponge, but this didn't spoil the taste at all. 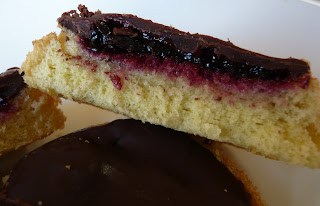 I think these were a resounding success! The blackcurrant was a more subtle flavour than the marmalade, but still very nice indeed. The marmalade jaffa cakes were lovely - bitter chocolate, soft cake and a lovely bitter sweet marmalade filling too.

As one colleague put it - the sponge isn't stale, the orange flavour is stronger and there's more, better tasting chocolate on them. So a success on all fronts I'd say! Do try them, they really are very good and not too much hassle for the flavour! Thanks Simon!!!
Posted by Caroline at 14:00

They look great! I saw Simon making them on SFTW and have been meaning to make them.

Superb Jaffa cakes C! Gosh I have such a weakness for these beauties.

these look fantastic - I would never have thought of making them at home either - we bought some a few weeks back and were laughing because they were made in serbia!

oh my gosh, I have to make these!