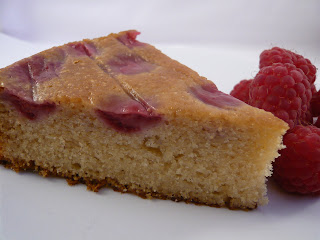 I first saw this cake on Smitten Kitchen, where Deb produces the most delicious looking food - I nearly always want to make what she has posted, and I suppose the thing that puts me off most (especially for the baking) is the use of cups rather than grams in measurements. But this cake looked so beautiful that I just had to give it a go, and by chance, Deb had posted metric measurements too so I didn't even have to convert! The original recipe is from Gourmet, a magazine I haven't seen in the UK, but then I haven't really looked for it. I expect it would be available in London or more specialist newsagents in other big cities.

I particularly love the way she describes it as an 'everyday' cake. The thought of cake every day is perfect! And this cake every day would be wonderful! Raspberries are definitely one of my favourite summer berries, and they are just right in this cake, although as noted elsewhere, you could use any other berry you want here.

I have to admit that my cake looks nothing like either Deb's cake, or the original on the Gourmet website, not sure why, but my raspberries all sank to the bottom. The cake didn't cook as quickly as I expected either (more on that later...) so it ended up rather brown on top. As a solution to both the brown, unattractive top, and the lack of raspberry visibility, I decided to serve the cake upside down, which worked well! 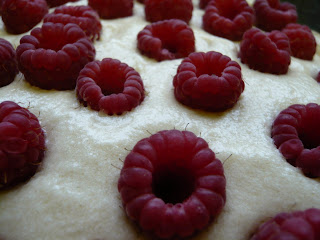 Method
- Preheat oven to 200C/Gas 6/400F. Butter and line the base of an 8 inch round tin. The original recipe specifies a 9 inch tin, which is probably partly why mine took much longer to cook. If you are using an 8 inch tin like I did, I would recommend a deeper tin. I used a sandwich tin, and I don't think it was deep enough to support the cake.
- Sift together the flour, baking powder and bicarbonate of soda and set aside.
- In a larger bowl, beat the butter and 146g sugar with an electric mixer until pale and fluffy (about two minutes if your butter is nice and soft) then beat in the vanilla. Add the egg and beat well.
- On a low speed, mix in the flour in three batches, alternating the buttermilk, beginning and ending with flour, and mixing until just combined.
- Spoon the batter into a cake pan (mine was quite stiff) and distribute the raspberries over the cake, as in the picture above. Mine are all facing upwards because Deb notes that these ones didn't sink for her, and I quite liked the idea of the look of the cake with raspberries visible. Irrelevant for me though, because mine all sank without trace!!! Sprinkle with the remaining sugar (if you remember, I didn't)
- Place in the oven and bake for 20-25 minutes (although mine took at least 50 minutes, unfortunately I can't remember exactly how long... due to using a smaller tin, and my ingredients being cold rather than room temperature when they went into the oven). The cake should be golden, and a cocktail stick inserted into the middle comes out clean. Cool in the tin for 10 minutes, then turn out to cool completely on a wire rack.
Buttermilk
I didn't have any buttermilk in my fridge, but following Deb's instructions I made my own. 120ml semi-skimmed milk plus a generous tsp lemon juice and leave to stand for about 10 minutes. The milk turned lumpy, which I'm assuming was correct!
When I made this cake, all my ingredients were cold from the fridge (apart from the butter) and I think this might be why my mixture curdled quite badly. I was hoping that adding the flour would bring the mixture back, but it didn't really, and adding the buttermilk certainly didn't help! However, the cake tasted so good that I really don't think that it mattered. 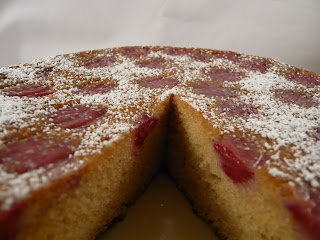 This truly was a delicious cake, and I would definitely make it again. It was light and soft and so moist with sharp and sweet bursts of raspberry. Delicious served with extra raspberries and cream, but equally good with a cup of tea or coffee.
Rapid disappearance of the cake at work confirmed what I thought - one of the better ones I have made, this one barely made it to 11am tea break (so I suppose it must make a good breakfast too!).
Posted by Caroline at 19:30

Cake looks rich and moist - just tell everyone it's an upside down cake and they'll be none the wiser!

Love the berries studded into the top, so pretty. Buttermilk always make cakes so lovely and moist, delicious

That does look good, and who can resist raspberries? Delicious!

Your cake looks moist and yummy and the perfect summer cake!

Oh what a lovely cake C. It looks so moist and with the raspberries peeking through, just divine.