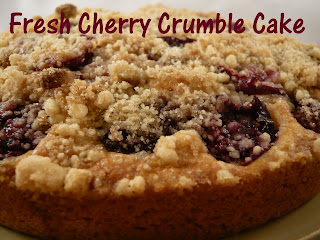 It's cherry time, and inspired by the Caked Crusader and also by having a punnet of cherries in the fridge surplus to requirements and having found a rather yummy looking recipe whilst flicking through some old mini magazines given away free with Good Food and Olive magazines(in fact, looking more closely, this is the same cake as the Caked Crusader made, which I didn't realise when I found the recipe!!!), I decided to make this cake. I seem to have accumulated quite a lot of these mini magazines, and sometimes read them on the bus on the way to work, trying to decide what to have for dinner or what to bake next!
Sometimes, the thought of having to make a crumble as well as a cake mixture would have put me off (oh, the extra effort....) but luckily I have in my freezer some little bags of crumble mixture ready made up, waiting for an opportunity such as this, or for me to want a fruit crumble. Serendipity! I can't remember exactly how I made up my crumble mix, but seem to think it had both caster and light brown soft sugar in it, so wouldn't be exactly the same as that given in the recipe, but almost. Anyway, I weighed one of my portions of mix and it was just the weight the recipe called for. 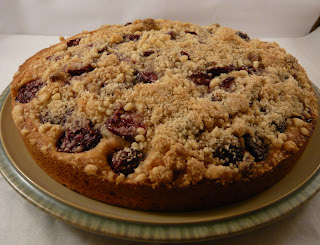 I think this is an attractive looking cake. Not neat or perfect, but inviting and homely.
The original recipe can be found on the BBC GoodFood website, here. I omitted the cinnamon, because although it's often paired with cherries it seems an almost winter-y spice to me and I wanted a fresh, summery cake.
Fresh cherry cake
Ingredients
140g self raising flour
50g golden caster sugar
1 egg
4 tbsp milk
85g butter, melted
350g juicy, ripe cherries - destoned
For the topping
25g plain flour
25g golden caster sugar
25g butter
Method
- Preheat the oven to 180C/Gas 4. Grease and base line a 20cm/8" round cake tin.
- To make the topping, tip the ingredients into a bowl, then work the mixture until it comes together into pea sized pieces. Because I used crumble mixture it wasn't as cohesive as this. Set aside.
- Sift flour and sugar into a bowl. Make a well in the centre and add the beaten egg, milk and melted butter and then beat well to a thick, smooth mix. Spoon into the tin and spread evenly.
- Scatter the stoned cherries (whole is nice, but I don't have a cherry stoner so had to cut mine in half to remove the stones) over the cake evenly, then scatter the crumble mixture over the top.
- Bake for 30-35 minutes until a skewer pushed into the centre comes out clean. I think I gave mine a couple of minutes longer, but not much.
- Leave in the tin until cool enough to handle then carefully turn out and cool on a wire rack. 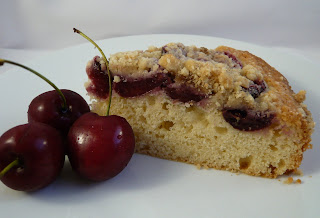 Perfect for dessert, served with some more fresh cherries. I guess it would also be good warm with icecream or cold with cream. The cake was lovely and light and the cherries made a nice juicy contrast to the soft cake and sweet crumble topping. I can imagine that this cake would be really good made with all kinds of fruit in season - I'm thinking perhaps of tart gooseberries, juicy plums or even pear or apple come autumn/winter time. I think that a fruit with a little tartness is needed. My cherries weren't particulary tart, but I can imagine the tartness of fruit working very well against the sweet crunchy crumble.

Colleagues loved this one, and it didn't last long at all!
Posted by Caroline at 07:15

I have loads of those mini magazines too! They're like a little addiction for me.

That cake looks lovely, I bet it would be perfect for the winter months with the cinnamon too.

I love those mini magazines!

Your cake looks really delish and I've yet to try a cake with fresh cherries. Might have to make one soon.

I'm another person who saves all those mini mags!
Your cake looks great - I know what you mean about cinnamon being a more wintery spice, but I'm too greedy to wait for winter!!!

what a nice-looking cherry crumble. must be perfect with a cup of tea.

Cherries puts my inner lightbulb on. This cake looks great.

Those cherries look so good in that cake!

They are great those mini mags! I also save them too...

Your cake looks absolutely gorgeous with those fresh cherries!