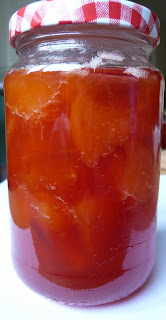 It's the season for jamming now. I love making jam - the bubbling pot on the hob, the delicious smells permeating the house, reminding me of making jam with my mum when I was younger (although not that young - boiling sugar and small children definitely don't mix!). I loved the whole process of visiting the pick-your-own farm to get the luscious, abundant fruit - gooseberries, blackcurrants, redcurrants, strawberries and if we were lucky, raspberries. I adore raspberries but they didn't seem to grow particularly well at our local PYO, and they're much more work to pick than strawberries, hiding under their leaves and taunting you....

And of course, once you've made the jam, you get to eat it - spread on crusty white bread toast with a generous amount of butter has to be the favourite here! Preserving the bounty of summer for later in the year is just fabulous.

However, this jam had rather less childhood nostalgia feelgood factor - I had overbought the soft fruit during my weekly shop and thought that preserving it would be rather better than binning it. And so I set to jamming, at about 8am on Sunday morning. I wonder what this says about me, but perhaps I shouldn't dwell on it too much! 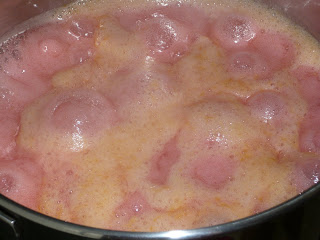 Obviously, I just used up what I had in the fridge to make this jam - the quantities are not strict.


Apricot and Peach Jam
Ingredients
900g ripe apricots and peaches (although on closer inspection a few of the apricots were off, so it was probably 850g!)
800g preserving sugar (the one with added pectin)
100g caster sugar (becuase I ran out of preserving sugar)

You will need some sterilised jars for potting the jam later on. I use Delia's method of sterilising them, given here.

- Place a small saucer in the freezer. I used a small espresso saucer - you don't need a massive plate, just something cold!

- Place the fruit and sugar in a very large saucepan (you'll see the reason for this in a later picture - the jam bubbles a lot!) and add about 100ml water, to help the sugar dissolve. Heat gently until the sugar has dissolved. You can tell when it has dissolved because it will no longer feel 'gritty' when you are stirring it, and when you lift up the wooden spoon you will not be able to see grains of sugar on the back of it.

- Bring to a rolling boil, and boil for 10 minutes. While it is boiling, I like to stir occasionally to prevent it sticking. The jam bubbles more fiercely when you stir it, so I use an oven glove to protect my hand from searing hot splashes. See picture above. 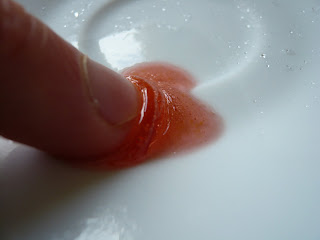 Testing the jam for setting point on a cold saucer
- To test if the jam is set, take a little and put it on the cold saucer. Push the jam with your finger, as shown and if it wrinkles as in the picture above, it's ready to be potted up. If not, return to a rolling boil for a further five minutes (and return the saucer to the freezer) and then retest. 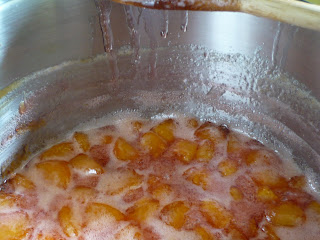 The jam after it has reached set point. You can see the 'tide mark' where the jam bubbled up during the rolling boil - this is why it's so important to have a very large pan. 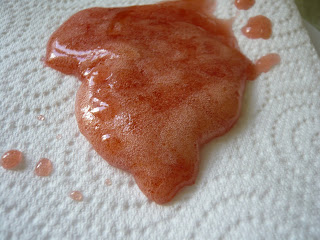 - Skim off the scum that's accumulated on the surface. (I always think the scum looks really good - I've never actually taste tested it, but it always looks so attractive. OK, I'll be quiet now then.....) 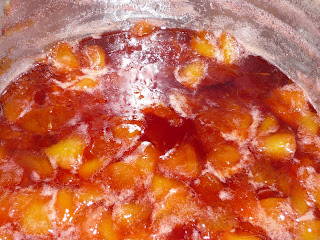 - Jam without scum - doesn't that just look beautiful. Transfer the jam carefully to the hot jars, filling them as much as possible. Add a waxed paper disc (available from Lakeland, among other places) and then wipe the rim if you've spilled jam onto it during potting up (pretty inevitable really, unless you've used a jam funnel). Then screw on the lids (but remember to hold the *hot* jars with an oven glove).

- Allow to cool before labelling, because otherwise the label tends to fall off....

- Enjoy as you wish, on hot buttered toast for preference!!!

I hate scooping the scum off the top so I just stir in a knob of butter, gets rid of the scum in seconds.

Wow this jam sounds and looks so delish!!

Just to let you know the scum tastes amost as good as the Jam :-).

I love making my own preserves. Your apricot and peach jam does look so good! I would love to spread this on some homemade bread - oh my *drool*....

I love making my own jam and bottling all the summer fruit goodies. Love your fruity combination.

That jam looks divine! I really must start making jam while there is such a glut of good fruit around.