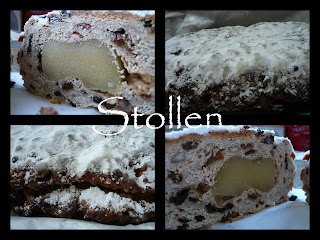 What would the weekend before Christmas be without a good baking project to get immersed in? I know J loves Stollen and I made one a couple of years ago using Delia Smith's recipe. I've made quite a bit of bread since then (I wasn't really doing as much baking then) and wanted to try a slightly different approach (and use easy blend rather than dried active yeast). I turned to one of my favourite and most trusted bakers, Dan Lepard to provide the recipe. The picture on the guardian website isn't the greatest - I don't know why there is a large gap next to the marzipan (and I know that Dan doesn't have anything to do with the food made for the Guardian photoshoot as he has pointed this out on his forums). For some better pictures, see the forums.
I adapted the recipe very slightly and have set out the recipe as I made it below.
Stollen
Ingredients
350g strong white flour
75g caster sugar
3/4 tsp salt
1/2 tsp each ground mixed spice, nutmeg and clove
1 tsp cinnamon
4 tsp easy-blend yeast
75g each of raisins and currants
50g mixed peel
150ml milk
25g additional strong white flour
125g unsalted butter, melted and cooled
1 large egg
Finely grated zest of a lemon
250g marzipan, rolled to a 20cm stick
Extra melted butter and icing sugar
Method
As I followed Dan's method exactly I'm just going to give a link to the recipe.
My notes:
- when kneading the dough both the first and second times, the currants and raisins kept jumping out of the dough and trying to escape. There were a lot of 'bits' in the dough and it was a very rich dough, which might account for it being less elastic than I'm used to for bread. It wasn't difficult to work though. 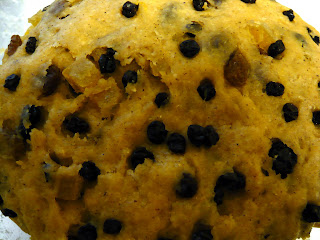 Dough rising. It didn't seem to rise very much, but then I wasn't paying a lot of attention! 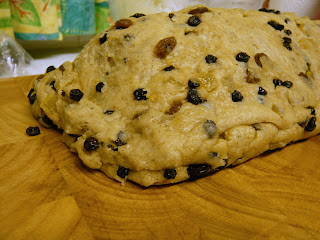 Dough risen and shaped around the marzipan - you can see the traditional shape of the stollen appearing now. I got quite good oven spring too. 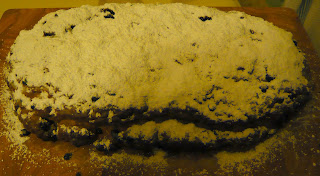 Cooked, cooled and with the coat of butter and icing sugar (but shot in appalling light!!!).
I was really, really pleased with the way this came out - it looked fabulous and J enjoyed it for Christmas day breakfast and was very happy with it! The rest is stashed in the freezer to be enjoyed at some point in the future.
Posted by Caroline at 22:30