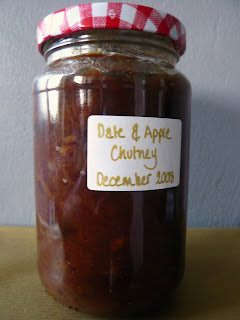 I don't have a very good track record with chutney, as J would confirm. The only other time I have attempted to make chutney I burnt the stuff to the bottom of J's preserving pan. The expensive one. And I don't mean just a little bit either. This was a full 5mm deep covering of black stuff that was hard as nails. It wouldn't dissolve no matter what I poured on it, and in the end the only way to get rid of it was to chisel it off tiny bit by painstaking bit with a sharp knife. Never again I vowed, would I make chutney. Jam yes, chutney no.
But then I saw this recipe on Katie's blog, Apple and Spice and it appealed instantly. I seem to have accumulated quite a number of apples recently (poor organisation when it comes to going shopping can have the same outcome as growing your own fruit and veg - a glut!!!) and also had some dates that I wanted to make use of. I bought them for a sticky toffee pudding which has unfortunately never materialised and now never will. So I fought the fear of burnt black stuff and attempted chutney again. And luckily it was rather more successful this time - no black burnt bits at all! I stirred a lot, which must have helped and I now have a gas hob instead of electric which I think also helps. This was easy, I think chutney is back on the menu!
As Katie says, this would be ideal with a pork pie or cold meats (if you eat such things - I don't) or a wedge of cheese (which I will happily eat!). I can't vouch for how it tasted as it needs some time to mature - I wouldn't want to prejudice the outcome by eating it too soon, so am leaving it for a full month. Another preserve for presents, but recipients will receive an 'eat after' warning for this as I didn't manage to make it in time for it to mature by Christmas (next year, next year, I shall be more organised).
I adapted the recipe slightly to suit what I had and to take account of my irrational hatred of garlic - can't bear it at all and though some of the jars were for presents, some were for me too! I also toned down the chilli (I think, I haven't tasted it yet!) as I'm not a fan of very hot food. So here is my version:
Apple, Date and Raisin Chutney
Ingredients (makes 4lb)
375g stoned dates
300g raisins
1 large onion (150g)
2 cooking apples
2 red chillies
50g chunk root ginger
300ml water
150g caster sugar
1 tsp salt
600ml (1pint) distilled vinegar

Method
- Sterilise sufficient jars to take 4lb of chutney (I used 3 x 1lb jars and 2 1/2lb jars). I do this by washing in hot soapy water and drying thoroughly. Place the jars in an oven preheated to Gas 5/190C for 15 minutes. (This is probably overkill, but it's what I did!)
- Chop the dates into small pieces and put into a large saucepan. Peel and finely dice the onion and apples and put into the pan along with the raisins. Slit the chillies with a knife and add those too. Peel and finely chop (or grate) the ginger and add to the pan with the water.
- Bring the mixture to a simmer and bubble for 15 minutes until the onion and apple are starting to soften.
- Add the vinegar, sugar and salt and bring to the boil. Reduce the heat a little and allow to bubble for around 20-30 minutes until thickened and broken down. A tip from Delia Smith to check when your chutney is ready is that when you draw a wooden spoon through it, the channel it makes remains for a few seconds and no liquid remains.
- Remove from the heat, fish out the whole chillies and discard.
- Spoon the chutney into the warm jars (this is messy) and screw on the lids (carefully as the jars will be hot).
- Allow to cool before labelling.

Keep the chutney for 1 month to mature before eating. Once opened keep in the fridge.
NB Your house may well smell of vinegar for a while after doing this. I didn't find it too strong, but then I quite liked the smell of simmering vinegar, but I know some people hate it!
I can't wait to eat this......
Posted by Caroline at 21:23