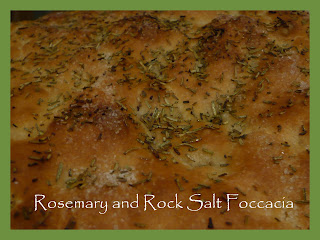 I first had foccacia when I visited Italy in the summer of 2006. J and I visited a couple of different places; Venice, the Lakes and then the mountains in the far North of the country. The food in the mountain areas is much more stereotypically Austrian or German in style than Italian, think Bratwurst not Bolognese, potatoes not pasta etc. However, it was here, in this perhaps unlikely place that I first ate foccacia. We bought a rosemary one from a little supermarket which was very nice, but then we found a proper bakery that was selling a green olive foccacia by the sheet. I bought a piece and fell in love instantly. It was thick and soft and crunchy and slightly oily with the most delicious flavour of olives and olive oil. Ever since, I have wanted to be able to recreate that type of foccacia.
I was lucky enough to go on a bread making course just over a year ago and we made a stunning foccacia there too. It was different because it was thinner, but just as delicious served with some lip tinglingly salty pecorino romano and wine for lunch that day. However, we weren't given the recipe, indeed, there wasn't really a set recipe. The baker worked by feel and look and although I attempted his method a couple of months after being shown, it didn't work in the same way for me. And sadly, I don't have an industrial bread oven. So the quest continued for a foccacia that I could make in my own home. 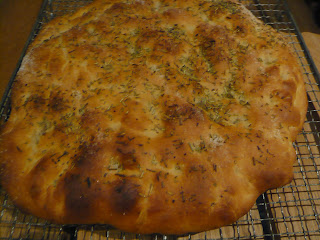 My first port of call for bread recipes, as regular readers will know by now, is the talented baker Dan Lepard. He has published a recipe for foccacia in the Waitrose Food Illustrated magazine a while ago and although it no longer appears to be on their website, it is on his website here. I have now made it a number of times and it is delicious. I have only ever made it with a rosemary and rock salt topping as that is my favourite, but green olives may be an imminent attempt, I just need to source some tasty olives first.

I'm glad this wasn't the first bread recipe I've ever tried though, as it can be a little soft and hard to work with. The most recent attempt was particularly sticky - it stuck badly to the work surface in spite of liberal application of olive oil and a dough scraper is very handy (but not essential!) for working the dough. However I promise that all this is worthwhile when you get the final product. 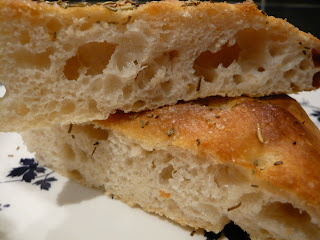 The crumb is nice and open but the bread has a good texture too, with a soft inside and lovely crispy top. I use dried rosemary on my foccacia because I have found that although fresh looks more attractive, it tends to burn to a crisp and then taste acrid and just plain nasty. Dried rosemary avoids this problem.

Since I follow the recipe and method exactly I am going to provide a link to avoid any copyright issues so here is the recipe for foccacia.

I use dried rosemary and rock salt for the topping and seem to have had best results when using the ale suggested in the recipe, but am only able to do this at home where there is someone else (you know who you are!) available to drink up the rest of the beer as I don't like it! I don't use the rendered pork/duck fat/dripping either. 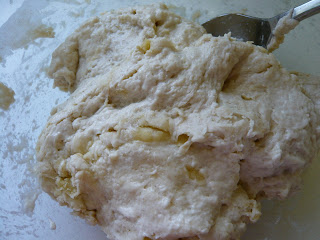 Rather an unappealing photo to start with, but bear with me because things will improve. 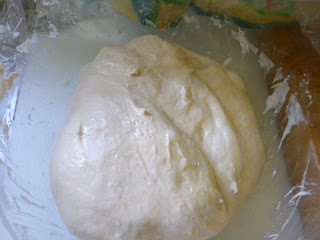 The dough after it has been folded. It isn't exactly a rectangular shape, but you can see the folds. 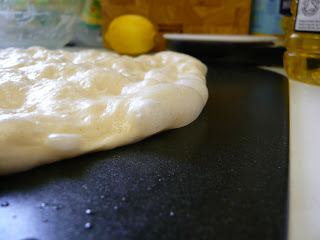 On the baking tray after being dimpled. You can see the trapped bubbles of air at the edge of the crust. 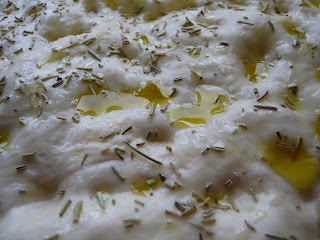 Sprinkled with dried rosemary and liberally doused with olive oil prior to being baked.

I love this bread, so thanks to Dan Lepard for a great recipe. I think this would lend itself quite well to variations - I've already mentioned that green olives would be next on my list of things to try and you could vary the herbs to suit the recipe you're accompanying. I particularly love this with mushroom risotto and it always goes down well at home.

Ciao ! I love your focaccia ! In Rome we call it pizza bianca and it is sold in every bakery (but only salt no rosemary) for us focaccia is more the one made in northern italy (famous the genovese) that is more soft and tall. I'm going to try your method soon ! Happy new year !Baci