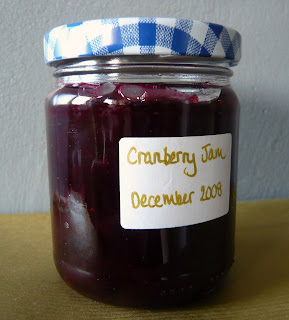 The Christmas cooking begins..... A quick and easy start though (not that it's ever going to get difficult given the lack of time I seem to have this year!) with this cranberry jam. Yes, it's the same one that bloggers the country (and probably the world) over are making at this time of year, and more than likely courtesy of Nigella Lawson. The recipe is extremely simple. In fact, possibly the most difficult part is trying to get the fresh cranberries. So, having achieved that, and sterilised the jars here is the recipe:

Method
- Place cranberries into pan with the splash of water (it needs to be barely enough to cover the base of the pan, and is just to stop the cranberries burning before they start to burst and release their juice to mingle with the sugar dissolving).
- Add the sugar and stir well.
- Place over a low to medium heat and stir until sugar has dissolved.
- Increase heat until jam is at a rolling boil. Boil for 7 minutes or until jam consistency is reached.
- Pour into sterilised jam jars and put lids on.
- Label when cold.

Well, those are roughly Nigella’s words, but I can’t tell what ‘jam consistency’ is until it’s cooled and I’ve made a fair bit of jam in my time! so I tend to put a small amount onto a chilled (in the freezer for a few mins) plate and see if the jam wrinkles when pushed – if it does, it’s ready, if not, boil for a few minutes longer.

I made this twice. The first time I used 350g cranberries and sugar and it made just short of 1 1/2lbs which was very annoying as I have a half full jar now! So the second time I used 400g of each and got three full 1/2lb jars. Perfect! The first batch was made with some vanilla sugar I had lurking around, so I'm looking forward to tasting that one and seeing if the vanilla flavour has come through at all.

I'm giving some of these as presents so I hope people enjoy it!