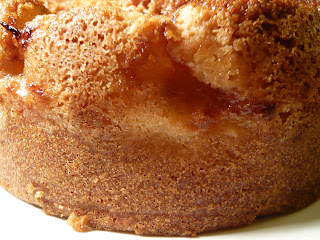 Ah, it looks as if the sun is shining from within this cake. If only that were the truth! In fact, I decided to bake a cake that would cheer me up on a miserable November afternoon when sunshine was the furthest thing from my mind. I had plenty of apples hanging around and have fancied making an apple cake for a while now. 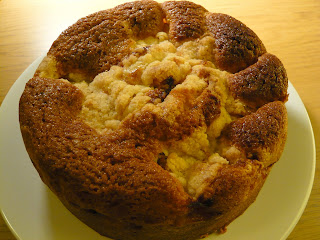 This one was inspired by the Caked Crusader's delicious blog but I decided to scale it down a bit as there's just the one of me, and I don't want to eat any cake, no matter how delicious it may be for ten or twelve days! So I halved the recipe given on the CC's blog. I wanted to try this recipe because I've never made a cake by this technique before and wondered whether it would be particularly light. I used cooking apples for my cake (Bramley's) and perhaps this was a mistake. I think that as the apples cooked and lost their shape they sort of absorbed the crumbly mixture, leaving less of it on the top of the cake than I would have liked.

Method
- Preheat the oven to 180C/350F/Gas mark 4 and line a 6" cake tin (mine is loose bottomed so I made sure to line it well to prevent cake escape!)
- Make the crumble topping by rubbing the butter into the flour and sugar (and spice if using) until you get coarse crumbs. Set aside.
- To make the cake; melt the butter in a small saucepan and leave to cool.
- Put eggs and sugar into a large bowl and whisk with an electric whisk. The mixture should increase a lot in volume, but mine only took about 3-4 minutes really - I guess due to having half as much mixture as the original recipe where 10 minutes mixing is stated. The mixture should be pale and fluffy.
- Add the flour and melted butter, being careful to leave the white bits of butter behind (I just left the last bit of butter, but you could strain through a sieve) to the egg mix and fold together until thoroughly mixed.
- Pour into the cake tin.
- Peel and core your apple and cut into segments. Place these on the top of the cake mixture carefully so they don't disappear.
- Sprinkle the crumble mixture over as evenly as possible.
- Bake for about 1 hour 10 minutes or so (this was a guesstimate on my part - the recipe for double the amount cooks for 1 1/2 hrs, but because you've got the same depth, it will probably take almost as long to cook).
- Remove from oven and allow to cool on a wire rack. 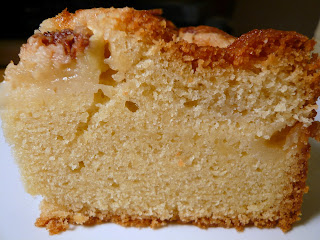 The cake has a lovely texture, light and moist yet also satisfying. The cooking apples were a nice slightly tart contrast to the sweet cake mix and the sweet crumble, and when I got a bit of crumble the crunch was a pleasing texture contrast. Next time I think I would add some vanilla to the cake mixture if I don't add spice to the crumble.

I would definitely recommend this cake. Enjoy it warm or cold with custard or cream for dessert, or just enjoy it as it comes, as I did.
Posted by Caroline at 22:30