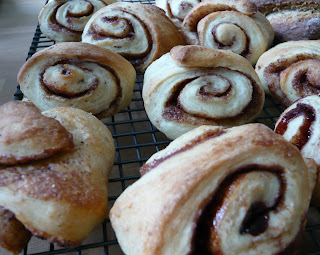 How on earth could I resist making something as gorgeous looking as these lovely buns. Two of the best bakers and bloggers I know, Joanna @ Zebbakes and Celia @ Fig jam and lime cordial, have both made these recently - Joanna first and then Celia added an excellent step by step guide to shaping the rolls. I suggest you check out both of their posts, Joanna's here and Celia's here to inspire you and give you guidance. And also for some better pictures! 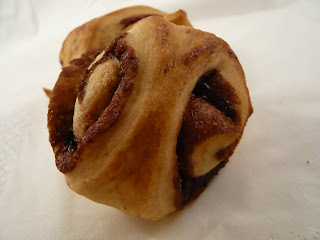 Sadly I don't have Falling Cloudberries by Tessa Kiros (although I do have two of her other books and haven't yet managed to peruse them properly) although I may have to get it now. I couldn't look up the method for making the dough, so I literally mixed all the ingredients together and left them for two hours! No kneading required! I'm not sure if this was right, but perhaps Celia or Joanna will be able to comment. There didn't seem to be very much movement in the dough, even after two hours, but it wasn't particularly warm in my house and I always forget how subtle the growth can be (i.e. I've already forgotten the size of the dough when I left it!). However, the yeast was obviously active as they proved well and sprang in the oven. 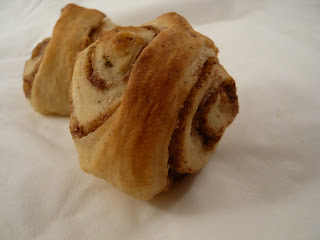 I halved the recipe and got 15 rolls from it - they're pretty small. I also wanted to try one of the variations Joanna suggests at the end of her post. So I halved the dough again and added about 1/2tsp vanilla extract to one lot of dough, and the traditional cardamom (about 1/2 tsp ground in the pestle and mortar) to the other lot. When it came to rolling out, I used a sugar/cocoa powder (about 3g cocoa powder, 15g sugar) mixture for the vanilla portion, and the cinnamon/sugar flavouring for the cardamom dough. I forgot to spread the dough with butter for the chocolate and vanilla version but remembered for the other. The butter makes the filling stick much better to the dough, I'd recommend it! I also entirely forgot to egg wash the rolls or sprinkle with sugar and I wish I had remembered because the sugar would have added a nice crunch. 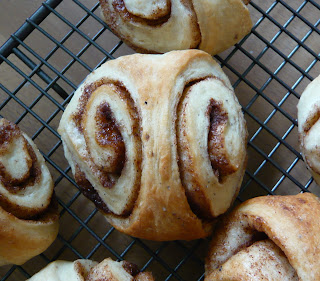 I will have to make these again to try and get the dough thinner so that my eyes have more circles - most of them are rather lopsided and not particularly owl like, but they all taste good! It feels really decadent to have chocolate for breakfast, but really yummy too! Because the dough is made with soft rather than strong white flour, the finished texture is slightly more cakey than bready, different but nice. I wasn't sure if I'd like the cardamom, but in combination with the cinnamon it's really good. Many thanks to both Joanna and Celia for introducing me to these.
Posted by Caroline at 19:30

They look good from here! I'm so pleased you tried them and it sounds as if you liked them... Yay!

C,I think yours look far more owl-like than mine! The "prettiest" one is positively Harry Potterish!

I made my dough by stirring all the dried ingredients together, then rubbing in the butter, then adding the egg and milk and mixing it all together by hand. It took ages to prove - it's cold in Sydney right now - but they did rise and give a most tender crumb from the plain flour.

Your chocolate version sounds wonderful! Thanks for trying them, and thanks again Joanna for the starting this cycle of owl roll baking..hehe..

C, further to this...I've put a pdf file on the original post on the bottom with mixing instructions and I've added them into the post. Don't know why I didn't in the first place... I don't think the dough has to rise visibly enormously in front of your eyes to be shaped, bun dough is funny stuff, because you are going to roll it out flat anyway as long as it has had its two hours it semms to work fine

Wow - they really do look like wee owl faces! So cute. They look fab and I bet they taste even better ;0)

Yep, really like them, and thanks Joanna for putting together that pdf, very handy for others wanting to make these.

Oh you had a go at these - I so wanted to eat them when I saw them on Joanna and Celia's blogs. Likewise I want to eat yours too - they look so scrummy so I'll try not to think of them as Owl Faces.