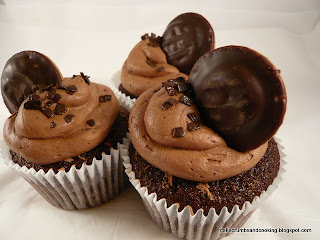 I do enjoy a jaffa cake or two (although it's been a while since I bought any) and the chocolate orange flavour combo is generally a successful one. I decided to combine the flavours by using a chocolate cupcake base, marmalade to add orange, chocolate buttercream flavoured with orange extract and then topped with a mini jaffa cake.


The cupcake recipe is my adaptation of the Hummingbird Bakery's recipe - I've altered the quantities to give me 12 reasonable sized cakes instead of 12 tiny ones.

For the buttercream (and as I'm typing this I realise I can't actually remember how I made the buttercream, but if I were to do it again these are the quantities I'd try)
90g unsalted butter, softened
75g dark chocolate, melted and cooled (see later comments)
140g icing sugar
1tsp orange extract

Method
- Preheat the oven to 170C. Place 12 paper cases in a muffin tin.
- Combine the flour, cocoa powder, sugar, baking powder and butter in a mixer and blend. The mixture will not form any kind of coherent mass, but the butter should look fairly distributed rather than huge lumps.
- Add the egg, milk and vanilla extract and beat well until combined.
- Divide between cases and bake for 18-20 minutes until a cake tester comes out clean.
- Allow to cool. 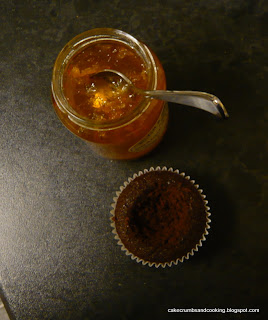 - When cool, cut a cone out of the cake (this is more difficult than with some other cake recipes as the crumb is so soft), blob a little marmalade into each hole and replace the top of the cake you cut out. See photo above - coincidentally this is why you don't usually get in-process shots from me - I'm usually doing this late at night and the light is truly rubbish. Apologies!

- For the buttercream - firstly melt the chocolate and allow to cool - this is slightly tricky because you want it cool enough to not melt the butter in the buttercream, yet warm enough to avoid it recrystallising into lumps. I learnt the hard way that my chocolate was too cool.
- Beat the butter and sugar until very light and fluffy, add the chocolate and orange extract and continue to beat. If the mixture is too stiff to pipe easily add a little hot water (from a kettle).
- Pipe onto the cupcakes, taking care not to dislodge the lid of the marmalade.

- Add a mini Jaffa cake and sprinkles if you want. 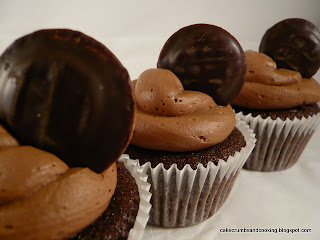 This chocolate cake recipe is really, really soft and light. It's quite sweet and structurally very delicate - perhaps not the most robust container for the marmalade but delicious anyway. The combination of soft chocolate cake, slightly tart, bitter marmalade and sweet orange scented buttercream was gorgeous and these were really popular at work. I'll definitely make this recipe for chocolate cupcakes again - they're so soft and moist! 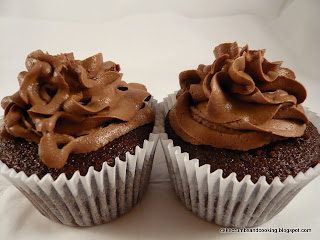 Exhibit number one - cupcakes piped with a blocked star shaped tip. I was trying to use a Wilton 2D here, and the cupcake on the right is fairly ok. As I mentioned earlier, I found out to my cost that my chocolate was too cool - it has formed micro-blobs of chocolate in the buttercream mixture, making it impossible to pipe. The cupcake on the left shows what happens to your pretty rose when the tip is blocked - a bit of a mess. Hence the smooth-piped look in the rest of the post. I usually avoid this and especially with chocolate buttercream, but actually with the mini Jaffa cake it looks quite acceptable! 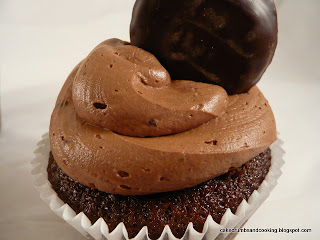 Ignoring the holes in the buttercream if you look directly at the centre of the picture above you can see a darker bit - that's one of the (many) bits of chocolate to clog the nozzle...
Posted by Caroline at 08:20

Love the decoration! Solves the decision of whether to have cake or biccies! Both!

I'm not usually over excited about cupcakes, but I would snatch this up so fast there would be sparks!

The decorating looks awesome! Not to mention all the chocolate...mmm :)

Despite your chocolate blockage problem, these look fantastic. CT is a jaffa cake fiend so I might just have to make him some of these one day - when I'm feeling kind ;-)