Black and Blue Cakes and an Anniversary 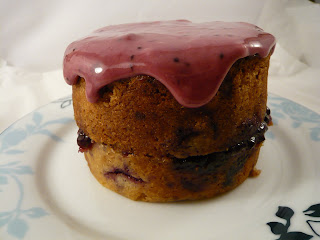 I don't often remember anniversaries associated with my blog (having forgotten both 'blogiversaries' and my first 100!) but this post is my 200th! I have to say that when I started blogging I didn't really realise that I would keep going for quite so long, and how important it would become. I'm constantly looking for new things to make (and the list of 'to make' is getting longer the more I look at other people's inspiring blogs) and really enjoy it. I absolutely love reading people's comments here and try my hardest to comment on other people's blogs because it creates such a sense of community and getting to know people who are possibly half way around the world but share interests. So thank you for reading my blog, I hope you carry on enjoying it, commenting on it and that I carry on baking for it!
Anyway, onto the recipe now...the spark of inspiration for this cake came from a feature in the October Sainsbury's Magazine by Dan Lepard. The cover for this issue pictured one of the cakes featured in the article - a double chocolate fudge cake. I would have bought the magazine anyway, but mmmm, yum! Inside I found recipes for Mini vanilla cranberry blondies, Blueberry mascarpone cheesecakes, Lemon drizzle cakes, Sweet potato and orange cupcakes, Mochaccino walnut cakes and the aforementioned double chocolate fudge cakes. Oh to be able to eat nuts.... Anyway I digress, what really appealed to me was that the mochaccino walnut cakes were baked in 4" pork pie tins, but as someone who has baking tins to rival the local cookware department in John Lewis (or similar... actually not quite there yet, but aiming high!) I couldn't quite justify the purchase of two more tins just to make a recipe that contains things I'm allergic to.
However, the idea of almost individual cakes just wouldn't go. And then I visited J and discovered (with great excitement) that she already has these tins (and in her case it's even justified - they make perfect small Christmas cakes) and was willing to lend them to me - deal done! So now I just needed to decide what to bake in them. The ongoing 'using up out of the freezer' saga demanded some form of frozen berry be added and I also wanted to use some of the jam that is accumulating in my fridge (I think when I baked these I had about five different jars open, which is approximately four too many to my mind) so the stage was set for these black and blue cakes. 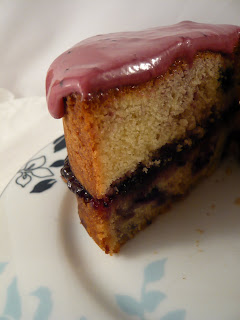 Method
- Preheat the oven to 180C/Gas 4. Grease and line two deep 4" pork pie tins.
- Cream the butter and sugar until light and fluffy.
- Add the eggs one at a time, beating inbetween each addition.
- Fold in the flour until well combined and then add the frozen blueberries and finally the jam, folding both through to mix, but leaving the jam streaky. I added my blueberries frozen in the hope that they might not sink. I don't think it worked particularly well...
- Bake for 35-45 minutes until well risen and golden.
- Allow to cool a little before turning out to cool completely on a wire rack.
For the icing, mix the jam with the icing sugar.

To decorate, halve your cakes, spread generously with jam and place the top half back on. Spoon over the icing, allowing it to dribble down the edges if you wish.
I cut these into 6 pieces each, although Dan's recipe suggested four pieces for each cake - it would certainly have been easier to cut into fewer pieces! The cakes were rather flat when they came out, which was a little disappointing, but good for decorating. I did find that it was difficult to pick up the pieces of cake to eat - the top was very gooey with icing, and the bottom tended to get left behind, but they seemed pretty popular at work - sweet with jam and refreshing little bursts of blueberry. 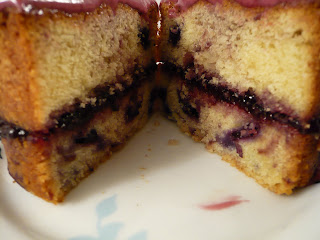 As you can see, most of the blueberries sank! I probably shouldn't admit this but one of the most satisfying things about making these cakes was finishing two pots of jam up that had been started thereby liberating two jam jars and some shelf space in my fridge - woo-hoo! I'll have to think of another use for these tins before giving them back to J.
Posted by Caroline at 22:20

Congratulations C! I love your inventiveness and always enjoy reading your posts. You have a light touch with words as well as cakes :)

I was imagining something far less pleasant when I read the title!!!

Happy anniversary. Now you have got me going about these tins :) Your cakes look lovely.

Congratulations on your 200th post! And what a way to celebrate! Yum ;0)

Oh well done! Your blog is really lovely to look at; just like this delicious icing.

Happy Blog Anniversary and also on your 200th posting!
The black and blue cakes look wonderful.

Yay - it's not just me!!! Isn't is satisfying to bake something lovely AND use up jars of stuff at the same time. I'm scared to open most of the cupboards in my kitchen at the moment lest I get buried under an avalanche of tins and foodstuffs!

Joanna - thank you, that means a lot!

BG - thanks, I don't know what you were thinking of though, and I probably don't want to!

Johanna - I hope I can provide inspiration - I always receive so much from your lovely blog.

Celia - oh bother! My idea was that frozen berries might sink less than fresh. Thanks for the info!

Brittany, Margaret - thank you both.

CC - My food no longer fits in my cupboards..... at some point I must stop going shopping for, ooh, maybe three months..... It's very satisfying to use up jars of things isn't it, we aren't alone!