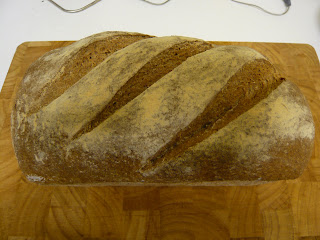 Well, I have to say that this is a more aesthetically pleasing attempt than my last loaf of bread! I saw some really good looking wholemeal spelt rolls over at Katie's blog, Apple and Spice and it spurred me into action. Spelt is a variety of wheat, but has been less intensively bred and developed than the modern wheat varieties which provide the vast majority of flour available in the shops. (It is also said to be easier to digest and some people with intolerance to normal bread can tolerate spelt bread more easily - DISCLAIMER: I have no medical knowledge and refuse to be responsible if you decide to try spelt flour knowing that you have a wheat intolerance!) I started out fully intending to make rolls, but then events conspired against me and I decided that not only was a loaf easier to work with, but it also fits into the freezer much more neatly than round rolls. So a loaf was born.
Having decided that a loaf was the way forward, I thought I'd better stick with a tried and trusted recipe for the wholemeal bread I quite often make. Anyone reading this blog for a while will know I'm a fan of Dan Lepard, and it was his recipe and methods of working the dough that I decided to base mine on for this loaf. Instead of pummelling the bread for ten exhausting (yes, I am that lazy!) minutes followed by a rise, a knock back and second rise, Dan advocates using three short kneads and leaving the dough to rest for 10 minutes inbetween. Sometimes this is a complete pain (when you're trying to knead bread and do the ironing at the same time for example - not good to have bits of bread welding themselves to your clean clothes) but most of the time I find some other kitchen task to be doing at the same time, making cupcakes more often than not, so the time goes quickly and I don't mind it. He explains his technique here, far more succintly than I will ever be able to, so it's well worth reading.
This is the recipe I based mine on; wholemeal bread. I have to admit though, I'm pretty lax with the timings. 10 minutes often stretches into 15 or even 20 depending on what other crises I may be having with things not cooking in the right time (Raisin buttermilk cake, you were the culprit this time!) or how distracted I get by other things. The recipe seems pretty forgiving though.
The changes I made were ditching the sugar and butter (because I'm lazy and I couldn't be bothered to melt the butter and mix it through) which are supposed to add to the texture and keeping qualities I think. And I also inadvertently added rather too much salt. I think I was confused between halving the recipe I'd seen on Apple and Spice and following Dan's recipe. I have a feeling I ended up with 2 tsp salt. Which was too much, even for my salt loving tastebuds. Well, when I say too much I mean I could distinguish that the bread tasted salted when I bit into it, it hasn't stopped me from devouring the rest of the loaf! So salt to your taste, I like 1tsp per 450g flour. Either that or I didn't make a mistake and spelt is slightly salty. Which I doubt somehow, but I'll be more careful in the measuring next time and find out for certain. 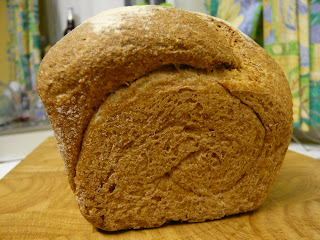 As I said before, I was struggling for oven space and time and the bread overproofed massively. So I just pushed it back, rerolled it and let it rise again so that it was ready for the oven at a more convenient time. I think this is perhaps why you can see the 'roll' of the dough so clearly. 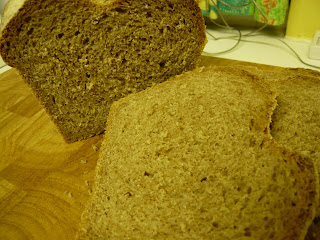 It doesn't really taste much different from the normal wholemeal bread I make (apart from being saltier!) so I'm not sure I'd bother with spelt flour again, I think normal wholemeal flour is fine. Perhaps I need to try a different brand of spelt flour. But anyway, the bread is great, make it and enjoy! (Homemade bread makes the best toast..... need I say more).
Posted by Caroline at 18:00

Why not go to Sainsburys and buy it made by the profesionals it's a lot easier than going to the trouble of trying to make it!!

Steve that's not the spirit.

And if you want another reason...

...if you had a wheat intolerance I think you would soon be making your own spely loaf as I do, rather than pay over £2 for a tiny loaf that has to be refreshed before every slice and tastes like an Argos catalogue.

Many store front breads and that includes Sainsburys and Waitrose include white wheat flour in even their so called spelt breads. Those who have an intolerance to wheat (like me) cannot eat these. Many store bought spelt breads also have the consistency of bricks and are also not very tasty. I have yet to find another loaf of spelt bread that is as light and fluffy as the one I found in Karlstein, near Aschaffenburg in Germany!