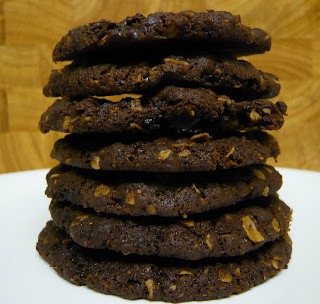 A desire to combine homemade biscuits with lots of my favourite flavours - spice, chocolate and ginger (a combination made in heaven) meant that when I was browsing Dan Lepard's forums and saw this recipe from a couple of weeks ago in the Guardian newspaper it shouted at me to make it pronto. And so I did. (I have to admit a weakness for chocolate ginger biscuits - these ones to be precise -scroll down to the chocolate ginger biscuits, they're delicious and bizarrely nicer cold from the fridge). I thought it'd be better to make my own and perhaps save a few pence! I followed the recipe quite closely, and have reproduced it below to allow you to enjoy these rather delicious biscuits too. 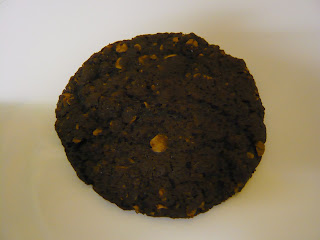 As you can see, mine didn't quite turn out like the photo on the Guardian website, but they were great anyway! I substituted 75g crystallised stem ginger for the stem ginger in syrup that he specifies and made the method quicker - what can I say, I'm lazy and pouring the melted butter and treacle onto the rest of the ingredients was easier than adding stuff stepwise. It might account for why my biscuits look slightly different to his, it might not!
Chocolate ginger parkin biscuits
Ingredients
125g unsalted butter
2 tbsp black treacle
75g crystallised ginger, diced small (the original recipe states 100g stem ginger)
125g light soft brown sugar
75g rolled oats
100g plain flour
25g cocoa
1 tsp bicarbonate of soda
2 tsp ground ginger
½ tsp mixed spice
100g dark chocolate, chopped

Method
-Preheat the oven to 160C /325F/gas mark 3.
-Melt the butter and treacle in a pan, remove from the heat
-Weigh all remaining ingredients into a bowl (recipe says to sift flour but I'm lazy!)
-Pour melted butter and treacle onto dry ingredients, mixing thoroughly until well incorporated and no dry bits of flour remain.
-Roll into balls the size of an unshelled walnut and press these down a little on to a baking tray lined with nonstick baking paper, spaced 3-4cm apart.
-Bake for about 20 minutes, until barely firm.
-Remove, leave for five minutes - they're quite fragile - then slide the paper with the biscuits on to a rack to firm up.
NB You will need two baking trays. Because he doesn't specify how many it will make, I didn't know how much space they would take and I only have one large flat baking tray. The round biscuits you see at the top of the post were made on this tray. The square biscuit below started out life as a round ball, but the small tray I baked these on meant they didn't have enough space and essentially formed one gigantic biscuit. Yum! but I cut it up into squares. I made 27 biscuits in total.
One other point is that it's very difficult to tell when they're done. They go in dark brown and come out...... dark brown. Mine were in about 25 minutes and were still soft when they came out. They firmed up on cooling. 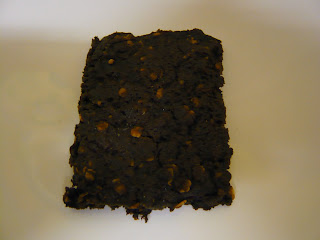 These were truly delicious biscuits. The oats added a nice texture - they were chewy all the way through and the treacle added a slight hint of bitterness and depth of flavour. Because there are lots of different components each bite is different - hot from a piece of ginger, smooth from a piece of chocolate, dark and spicy. Really addictive.
I took some into work, where they were received very well indeed, disappeared rapidly and got very favourable comments. Everyone loves a good chewy biscuit with their tea or coffee.
Posted by Caroline at 19:00

I used dark chocolate with 100% cacao and stem ginger in mine - loved the surprise in every bite :-) so did everyone i gave them to.