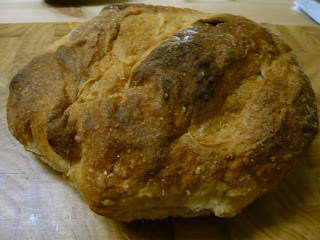 Definitely not the most attractive bread I've ever made, but getting past first appearances is a must, this tastes really good - moist and chewy. I like my bread to have a bit of a bite to it - there's nothing worse than finishing lunch and feeling like you've just eaten air - a sort of cheated feeling. Not here though. The bread isn't heavy at all, but has a lovely texture - solid enough to know that you've eaten, if you follow my meaning.
The recipe came from Delicious magazine, November 2008 issue. I subscribe to this (well, in my defence I would only buy it in the shops anyway, so subscription is by far the cheaper option) and had some problems with my copy this month - I had to call the company up and request a re-delivery as mine hadn't arrived by the middle of the month! But anyway, when it arrived and I eagerly flicked through it there was a guest chef feature by Dan Lepard! I've mentioned him before on the blog (here and here) - I really like his bread recipes and when I saw that this one had potato in it, I really wanted to try it. I first read about potato bread ages ago in Nigella's 'How to be a Domestic Goddess' and dismissed it, but then read about it again when the Daring Bakers made it, and then again a couple of weeks ago. This repeated exposure was enough to catch my attention and when the introductory paragraph explained that potato used to be used by bakers years ago to keep bread moist, and that the bread freezes well, I was sold! One of the results of living on my own is that most things I make tend to get frozen and it's always nice to find something that stands up well to the freezing process. I have had a couple of bread recipes recently that have become freezer burnt quite quickly.
OK, so my picture of the finished loaf isn't great - but the pictures below showing the lovely moist insides and textured outer are better! (Well, not better pictures, but show the bread off to better effect!) 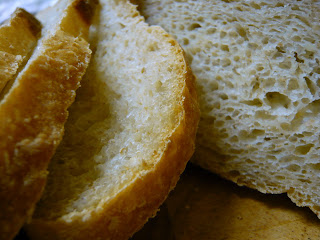 Lovely moist interior with even texture and holes. 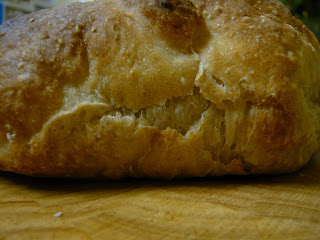 Crusty looking exterior. I say crusty looking because as I took them out I expected the crust to be quite hard and crisp, whereas it was actually quite soft. I liked that (means you don't cut your mouth eating your sandwiches!) but it did make it more difficult to slice. The recipe makes two loaves and I sliced and froze one the day I made it and one the next day. It was much easier to slice thinly the following day so unless you're a dab hand with the bread knife I'd maybe try leaving it a day before slicing. I therefore had quite thick chunks to make my lunchtime sandwiches with - they were slightly unwieldy!
I'm not going to give the recipe, as it is published in the magazine, but will keep my eye on the delicious website because next months magazine is published soon, so there is a good chance it'll go on the web soon. Watch this space, but if I don't see it there soon, I'll post a version here.
Essentially the recipe involves boiling a potato to make mash (see picture below where I was being lazy and using a fork rather than a potato masher - easier to wash up!) and then using the water the potato has cooked in as the liquid component of the the dough. The method is Dan's usual three short kneads method, which I find very effective. 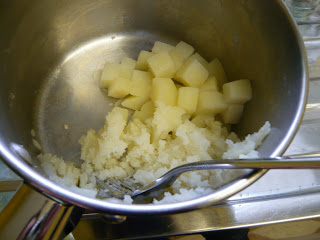 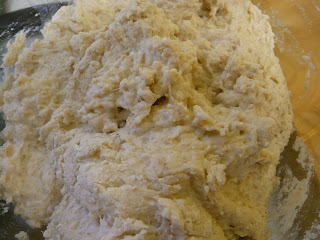 It always looks like a disaster at this stage - leave it for 10 minutes before giving it the first of the three kneads. 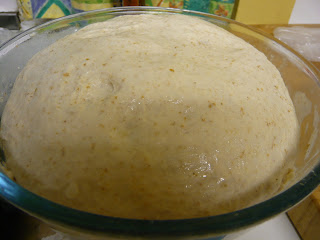 Yep, the yeast is definitely active in this loaf!! 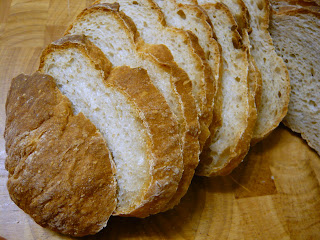 And finally leaving you with another picture of the interior - it really did make great sandwiches and I'll be making this again soon - it isn't often I make something straightaway from the current month's foodie magazines but this really jumped out at me! The recipe makes two loaves out of 500g flour plus a 225g potato, which seemed quite surprising, but was very welcome! And I can report that it does indeed freeze well - I've had it for lunch every day for almost a fortnight and it's just as good now from the freezer as it was fresh. Good result Dan!!!
Posted by Caroline at 19:32