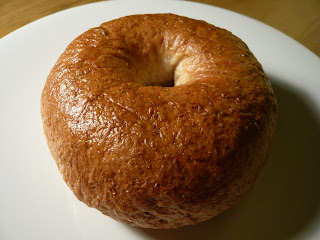 Nothing very exciting today I'm afraid. I decided to make bagels again, using exactly the same recipe as last time, but making a couple of little changes. I substituted 1/4 of the flour for wholemeal strong flour (so 300g extra strong white bread flour + 100g strong wholemeal flour), reduced the sugar from 2 tbsp to 1 tbsp (it turned out to be about 11g) and reduced the salt a little as well. In the first batch I made 6, as stated in the recipe, but decided they were quite big and tried for 8 the next time. There just wasn't quite enough when they were the smaller size, but then I'm greedy, so 8 might be ok for you. So I made 6 of these wholemeal ones and I'm going to stick to that size from now.
The only other thing I did was to use a smaller pan for poaching them in. The first time, I used my enormous stock pot, but could still only fit two bagels in and so I decided that in the interests of boiling less water and using less malt extract, I'd use a smaller pan. This worked fine - and I reckon that using a smaller volume of water means I only need 1 tbsp of malt extract, which makes them cheaper too! It does seem a shame really, that you use the malt extract (obviously a necessary part of the recipe, but not the cheapest or easiest to get hold of) and then just pour it down the drain once you've poached them! 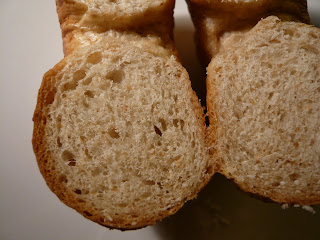 And a gratuitous picture of the innards, showing the lovely dense texture and chewy crumb. I don't think the changes I made had an adverse effect on the bagels, and I'd do them wholemeal again. I don't think I'd go totally wholemeal - think they'd be a bit heavy, but a 50/50 mix white/wholemeal might work.

Hi there, I came to your blog looking for advice on cooking bagels with wholemeal flour. I'm been making great ones with normal flour for almost a year now. But want to make them a little healthier. Anyway, I wanted to let you know that in my recipe the bagels are boiled in water with brown sugar added. Obviously someone else didn't like wasting expensive malt in the water. I still but malt in the bagel dough recipe. So yeah, you might want to try that next time. Happy cooking.