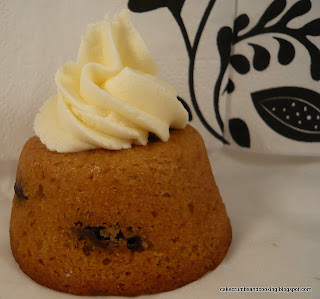 Each year at least one of the magazines that I subscribe to (yes, I subscribe because I'd only end up buying them each month, and so it works out much cheaper this way!) has a freebie calendar, which is usually really useful. I don't actually use a calendar on the wall that much any more, preferring an electronic means of keeping track of where I'm supposed to be and what I'm supposed to be doing, but I still like to have the calendar on the wall. (I think this harks back to my childhood, where all events were meticulously recorded on the calendar lest we forgot something...) 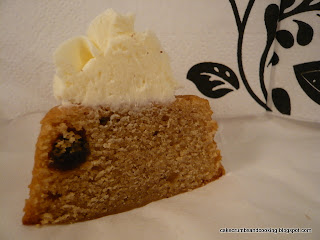 This year, the calendar is from the BBC Good Food magazine, and it's a good one. I have sometimes found that when the calendars are sponsored by certain companies every single recipe contains their ingredient. This is fine if they've got a reasonable range to choose from, but it gets a bit old to have 'X-brand' cheese in every single recipe. Anyway, this year the sponsor is Dr Oetker, but happily almost none of the recipes have a sponsored ingredient in them, they're just good BBC Good Food recipes.


Anyway, this is leading somewhere, I promise. I have spent most of the year walking past this calendar and seeing the recipes each month (January - Frosty yogurt orange cake, February - Passion fruit cupcakes, March - Sultana tea loaf) and haven't made any of them yet. Until now. Turning over the page just over a month ago I was greeted by Little banana cakes with maple pecan frosting. So far so unexciting. Not really a recipe for me as I can't eat pecans. But then I realised that adapting this recipe would be perfect for some of the ingredients I had around needing using up. Maple syrup and a very ripe banana (just the one lonely one - not helpful for the majority of recipes, which require many very ripe bananas; I'm sure I'm not the only one out there to only get one small ripe banana left over...) called my name. 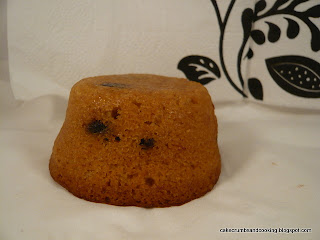 Usual method for making buttercream, if you want (i.e. about half butter to sugar - I'd be tempted to use about 40-50g butter for six cakes and therefore about 100-140g icing sugar)
Flavourings as desired (orange, lemon, maple syrup etc)

- Preheat the oven to gas 4/180C. Grease a 6 hole muffin tin well with butter (or, obviously, use 6 holes of a 12 hole tin...)
- Cream the butter and muscovado sugar (if you don't want to do this step separately then either use a hand mixer, NOT a stand mixer or make sure your butter is super, super soft - I thought mine was, but clearly not - the butter wouldn't mix into the rest of the ingredients using a stand mixer and I ended up decanting into a different bowl and blitzing with a hand mixer).
- Add the rest of the ingredients except the raisins and beat well until combined.
- Stir in the raisins and divide between the prepared tins.
- Bake for 20-25 minutes.
- Turn out onto a wire rack and allow to cool.

If topping with buttercream, make up as usual (beat butter until soft, add icing sugar in a couple of batches, beating until well combined, light and fluffy - I usually add a splash of water to make the mixture easier to beat) and add flavourings as desired. Maple syrup might be good here. 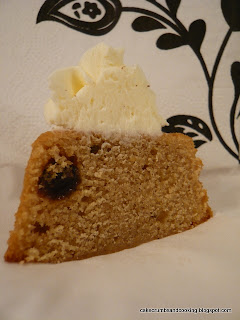 I love, love, loved these. They aren't too sweet, they aren't too banana-ry and the flavour of the maple syrup doesn't come through strongly. That makes them sound a failure doesn't it, none of the constituent flavours being readily identifiable. But in fact, the whole is greater than the sum of the parts. The cakes are moist and deliciously dense, sweet but not overly so, and the maple syrup adds undertones and is subtle. The raisins are plump and juicy and really add to the overall cake by providing a contrasting chewy texture. They develop a delicious sticky top after a day or so and soften slightly around the edges, really, really good. So successful in fact that I have made second and third batches for myself already. In the second batch I added about 50g dark chocolate, and this was one of those occasions were the chocolate was an intrusion, unwarranted and detracted from the deliciousness of the cakes as they were. Needless to say, the third batch didn't contain chocolate and was much the better for it.

Lovely little cakes! Sadly, Good Food doesn't seem to be giving away a calander for 2013 - I had to get mine with Sainsbury's magazine!

I haven't used a paper calendar for years (although based on a parcel that arrived today from an aunt I am about to begin)! These cakes look delicious.

I too have this calendar and these shot straight to the top of my (very lengthy) 'To Bake' list when I turned the page to the new month. Really glad it was as successful as the recipe sounded on paper!

They look fantastic. I generally find the recipes in the calenders don't get made so I am going to have to look my copy out so I can have another flick through, clearly I am missing something lol

What a wonderful little cake. Almost a pudding. Divine. I love the idea of cooking one recipe from the calendar per month. It would make a great bloggers challenge!

Ooh yes, I echo what Dom said. I reckon these would be great for dessert with some caramelised bananas and some whipped cream. Yum!

Haha I have the exact same calander on my wall from last year too. I often buy the Christmas mags as I like looking at all the ideas.
These cake look delicious and I love the addition of chocolate chips.

Brilliant I love these...I also made them from the same calendar and they turned out really well! Love yours they look so tasty! I have a new calendar this year and was considering trying to make the recipe of the month each month...but we'll see how far I get! :-)

I would certainly have a try at making these. Maple syrup is so good, and a perfect partner to bananas. I do like a paper calendar although they are useless when you are trying to make plans outside the house!

They look yum and I love your simple decoration too - enhances their beauty.
I am just like you - I always have a calendar hanging on the wall and, other than looking at the picture when I change the month, it is completely redundant...but the thought of not having one - that can never be!

What a lovely little cake!
I must have a go at this recipe. I confess I rarely do more than flip through the free calendars before I put them in the bin....obviously I'm missing out on a lot!

Makes me want cake now... Have you tried putting nuts in the cake? I think peanuts, walnuts or cashew nuts would go really nicely. Might try that myself sometime...

Lovely bake, Caroline. Replying to your email this morning. SImple and in Season NOvember is up and I've kept you as host for February Thank you so much x

Lovely cakes! I've cut down on buying all the food magazines, just treat myself to them at Christmas, and maybe a couple during the year.

Sue - yes, I'd noticed the lack of a BBC Good Food calendar and mine too is from Sainsburys this year!

Foodycat - no, I don't really use mine, I just like having one. The cakes are great!

Kate - I'd definitely recommend them - a very good recipe.

Chele - it was a particularly good calendar for 2012 - they were all baking recipes :-)

Katie - have to say the chocolate chips just didn't work here, but otherwise a great recipe.

Laura - yes, I was searching to see if the recipe was online and came across your version - they looked great!

Laura - Maple syrup and bananas seem to be a combination made in heaven!

CC - yum is the word. Glad I'm not the only one to have a redundant calendar!

Jean - yes, have a quick look before binning them!

Seventypesofbiscuit - nuts would work really well - the recipe says pecans I think but I substituted due to allergy restrictions.

Nic - I wish I had your willpower - I know I'll buy them all so I may as well have subscriptions!

I love an electronic calender for work and a paper calender for home - I like having the calender on the wall and seeing the month spread out - these cakes sound great but unfortunately I have quite a few bananas that need using up - sigh!