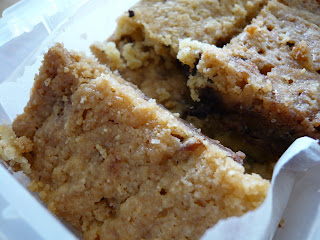 Well, anyone who knows me well (actually, even those who only really know me in passing!) know that I love chocolate and will eat it with no excuse whatsoever. But this week some nice people (possibly in London, most things seem to have an origin in London) have organised Chocolate Week. Ah, a reason to eat chocolate for the whole week and persuade other people that they should be doing the same! I particularly like Green and Black's range of chocolate - it's all delicious, especially the mint chocolate, and even more so if you put it in the freezer for a while before eating it (not recommended for those with weak teeth - you know who you are!). My other favourite brand is Divine chocolate. I've spoken about them before - they make delicious chocolate with a heart - it's all fairtrade, which I passionately believe we should support when possible. Do check out their website for loads more info about their fantastic products and show your support by buying the chocolate - available in all good supermarkets (and some that we'd rather not shop in.....)
Chocolate week runs from the 13th to the 19th of October, so make the most of it! To start I decided to make chocolate shortbread. I've recently started at a new site with work, and I wasn't sure how well cakes would be received so I decided to make biscuits as they keep better if not many people were interested in eating them. The new site is also considerably smaller than my old one and I wasn't sure how many people would be on diets/not wanting to eat sweet stuff etc. I needn't have worried! These were gone in just over a day!
The recipe is from Sue Lawrence, from her older book 'On Baking', not the newer 'Book of Baking'. I actually prefer the older one, but sadly it isn't nearly as readily available to buy. It's a fabulous book and every time I look in it I find something more that I want to try. It's predominantly sweet, but there are some very interesting looking savoury bread recipes (Rice and Leek bread, Stotties, Chollah, Kentish Huffkins - persuaded to buy it yet?). 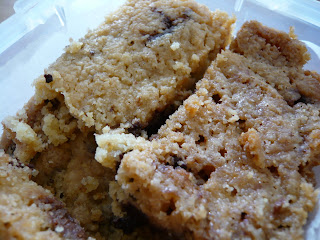 Chocolate Shortbread
Ingredients
250g butter, softened
150g caster sugar
150g milk chocolate, cut into chunks
200g plain flour, sifted
100g semolina
Method
- Preheat the oven to 150C/300F/Gas 2.
- Place the softened butter and sugar in a bowl. Using an electric mixer on a low speed beat together until light and fluffy.
- Add the chocolate chunks, then the flour and semolina (you need a big bowl!). Using a wooden spoon, combine everything together without overmixing (as she says you will get a tough dough if you overmix). The mixture will still be slightly crumbly - don't worry!
- Turn into a lightly buttered swiss-roll tin, 23 x 33 cm/ 9 x 13 in. Press the mixture down using the palms of your hands or the back of a spoon.
- Bake in the oven for about 40 minutes, or until golden brown around the edges.
- Cut into squares or fingers while stil hot and leave to cool in the tin for 30-40 mins. Using a large fish slice, transfer to a wire rack to finish cooling before eating.
Notes: I found the mixture quite greasy, but I guess this is a function of so much butter! The shortbread has quite a distinctive crunchy texture due to the semolina. I think if I make these again I'd use less semolina. I used a mixture of 50g dark divine chocolate and 100g of Sainsbury's taste the difference milk chocolate with caramel pieces. 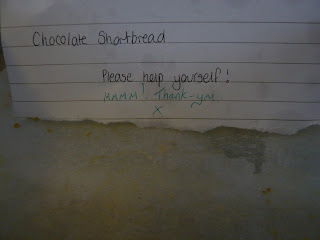 Well, that's all I really ever want to see - that people have enjoyed what I've made - it's great to have feedback! Some people commented that it was like flapjack - I guess this is because the semolina gives it a crunchier texture, but they liked it anyway!

I love the little satisfied message at the end! hehe