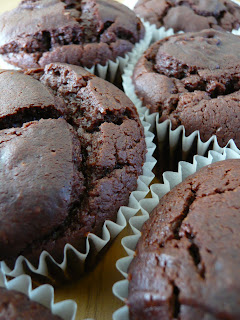 Mmmmmmm!!! What more can I or do I need to say? It seemed fitting to make something intensely chocolately to celebrate the end of chocolate week. My family are currently quite a way from me and consequently I don't get to see them very often. This also means that they tend not to get to sample the things that I bake and write about here. T was complaining that he never gets any of the muffins I bake and talk about and since I was meeting him and J this weekend, I thought I'd make something really special.
I was intrigued by the recipe for these muffins. I'm used to muffin recipes which have wet and dry components measured separately and then mixed together very briefly before being baked. These are different. They involve heating cornflour, water, sugar and cocoa powder to make a sort of custardy mixture - the custard in the name. They come from Dan Lepard via his 'How to Bake' column in the 'Weekend' magazine of the Guardian. I really like his recipes - I have used more of them for savoury breads, but the sweet ones are good too. He also has his own forum where recipes are posted, allowing bakers to ask all the questions they want - about adaptations to the recipes, baking times, any problems etc, but quite often just to say 'I made these and friends/colleagues/family agree with me that they're fantastic!!!'. Dan Lepard himself is often on the forums and will reply to people's problems in person, which I think is fantastic - he doesn't just submit the recipe to the Guardian and then forget about it all!
I'm not going to type out the recipe as I followed his instructions verbatim, and give him full credit for the fantastic outcome. You can either find the recipe here on his forum, or here in the Guardian newspaper. If you get the recipe from the forum, Dan says who won the competition mentioned, it's definitely worth taking a look at Nic's blog Cherrapeno for some fabulously tempting food and great photography.
Notes: When I made them I tried using a whisk for the custard stage, but it seemed to miss the clumps forming in the corners of the pan, so I switched to a wooden spoon, which was much better. The custard you get is very, very thick! When I added the next set of ingredients, the mixture seemed to split and curdle. It stayed looking like that until I added the flour, at which point it miraculously rescued itself! They were done after 25 minutes, just as the recipe says.
The majority of these were given to T to take away and enjoy during the long cold nights in Scotland (although for all I know he's eating them for breakfast) but I kept a couple and J and T tested one last night and the sounds were all of praise and satisfaction- these are seriously good - you won't regret making them! 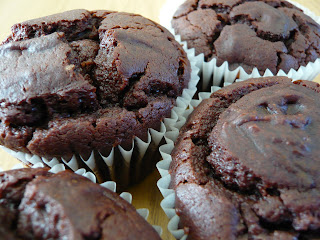 I found you from Natalia's blog - and I know her through the 'Tuesdays With Dorie' event - just surfing the food blogs on a Saturday, basically! Anyway, your blog is great, and I really appreciate the links to Dan Lepard's forum. I enjoy breads, and plan to check out some of his recipes. I've followed Delia's recipes, and taken a glance at some of Nigella's. It's great seeing what cooks on the other side of the pond - or the world - are stirring up!
Nancy
The Dogs Eat the Crumbs