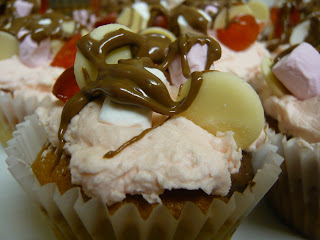 One of my colleagues had a significant (noughtie!) birthday recently so I decided to make some cupcakes as a present for her. It was also a good reason to try out a recipe from (yet another!) a new cookbook. I found it in Marks and Spencer recently, simply entitled 'Cupcakes' for the bargain price of £3.50. (Unfortunately I can't find a link to it on their website - the nearest I can get is the 'Cookies' book which appears to be in the same series). I am so, so pleased with this purchase - I've been wondering about getting a cupcake book recently to inspire me, primarily for decorating ideas and this one is full of great ideas for decorations, but even better than that is that all of the cupcake bases are different too - ranging from the simplest standard cupcake mixture to the exotic sounding fig, caramel and walnut cake or white chocolate pistachio cake and the downright decadent chocolate ginger mud cake. There are a lot of bookmarks in this book already!
The friend in question is definitely a fan of milk chocolate and all things sweet so I decided that a rocky road type decoration astride a layer of buttercream perched on a marble cake base was the way forward for her. The cake itself was relatively straightforward to make, being essentially a basic sponge mix, but divided into three to allow the colours to be added. Colour comes in the form of red food colouring for the pink part - you can see the pink portion in the picture below, along with the food colouring and some of the general mess I make when I'm cooking! Cocoa powder colours the dark portion. A tbsp of cocoa is added and this thickens that portion of the mixture slightly. I forgot to add the recommended extra milk but would suggest you do add it, as the cocoa mixture was quite stiff. I also didn't take out quite enough for the cocoa portion, so there wasn't very much chocolate cake in comparison to plain and pink cake. Ah well, live and learn. 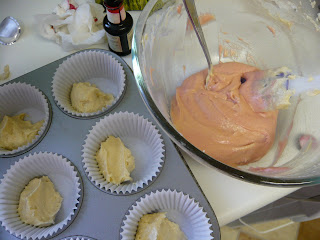 Method
- Preheat oven to 180C/Gas 4. Line 6-hole large of 12-hole standard muffin tray with paper cases.
- Beat butter, extract, sugar and eggs in small bowl with electric mixer until light and fluffy. Stir in the sifted flour and milk in two batches.
- Remove a portion of the mixture to a small bowl and add the cocoa powder and 2 tsp milk to it. Mix well to combine.
- Divide half of the remaining mixture between the 12 cupcake cases. This is the plain portion. Add the pink food colouring to the remaining mixture in the bowl until you achieve your desired colour. (You could use two separate bowls and add the pink to 1/3 of the total mixture, cocoa to 1/3 and leave 1/3 plain, but my method saves on the washing up, and besides, I didn't have sufficient clean bowls!)
- Divide the cocoa and pink mixtures between the tins. They will look like the photo below: 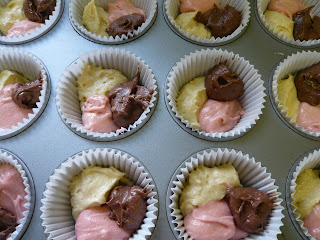 - Then it's time to swirl the mixture. I used the handle of a teaspoon as I find a cocktail stick or skewer doesn't swirl very effectively. They will look like the photo below: 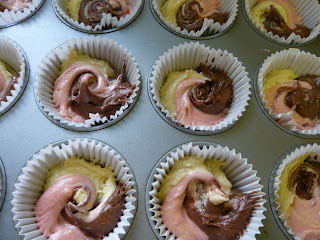 - Then into the preheated oven for 30 minutes (large cakes) and 20 minutes (small cakes). I found that mine took 30 minutes even though they were only small cake size.
Rocky road topping
Really, this is up to you. I didn't go with the recipe recommendations because I decided the recipient probably wouldn't want nuts on her cakes and so I went for white chocolate buttons, quartered glace cherries and marshmallows, as pictured below. I had enough for about 3 chocolate buttons per cake, 3 quarters of glace cherry per cake and 2-3 mini marshmallows. I made up some buttercream (using about 60g butter, 120g icing sugar plus pink food colouring), smoothed it on when the cakes were cool and added the toppings. 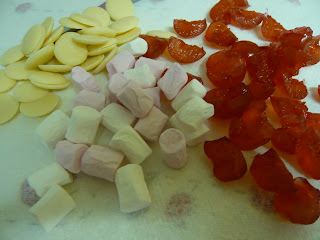 I then melted some milk chocolate (I can't remember exactly how much, but 50g would probably be plently, and is the amount recommended in the recipe) and drizzled it over the decorated cupcakes. Unfortunately the chocolate I used didn't melt very well and so it sort of 'glopped' rather than 'drizzled', but you get the general idea. 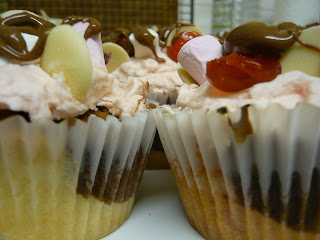 I think they went down well, but obviously can't tell you how they tasted, because they were for her not me! Happy Birthday!!!
EDIT: I've had word back from the birthday girl that they were very much enjoyed!
Posted by Caroline at 22:36