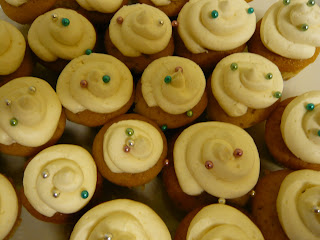 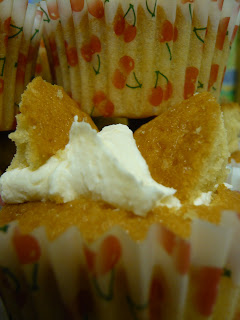 I still had some of the Werther's original toffees left, from when I made the chocolate caramel mud cakes, and decided that rather than eating them all myself, I'd add some to a basic vanilla cake mix, and see if they would suspend themselves as well as they did in the previous recipe. I opted for a standard 2 egg cake mixture, but decided to bake mini cupcakes, using a mini muffin tin. I topped them with a vanilla buttercream, and then having decided that not using a star shaped nozzle left them perhaps a little unattractive (in photo below), I topped them with some different coloured 'silver' balls (see top photo). I say 'silver' as they were blue, silver, green and pink. 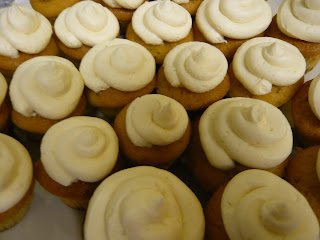 As with the last time I used the toffees, I cut them into three and just put one third into each mini cake. As the pieces had suspended themselves in the mixture so well last time, I decided to push them down a little further this time, which turns out to have been a mistake, as the caramel sank to the bottom as they cooked, leaving a slightly aesthetically disappointing result - I would really have liked the caramel to be in the very centre of the cake. Ah well, practice makes perfect, I'll just have to try again!
You can see on the picture below that the dark rim at the bottom of the cupcake case is where the toffee ended up after baking. Another slight problem with them was that I added a little baking powder to the recipe, as I often do when using an all-in-one method, and I'm not sure if this is the reason that quite a few of them decided that making a break for it and escaping out of the cupcake case was far more exciting a prospect than staying put and just rising slightly! You can see the slight mushroom effect below: 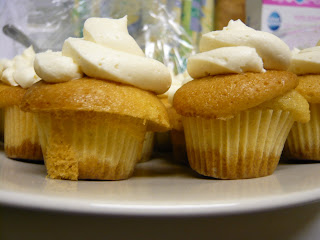 The only other reason I can think of for this to happen (and it's not something I normally get, honest!) is that the melting toffee may have somehow superheated the surrounding cake mix and caused it to rise very vigorously - well, I can only guess I suppose. I used the same recipe for making the larger muffin sized buns that made the butterfly cakes, again filled with vanilla buttercream, and there were no exploding cake problems there!

Method
- Preheat oven to 180C/Gas 4. Place paper cases in either a 12 hole standard size muffin tin or in 24 mini muffin holes.- Place all ingredients into a large mixing bowl and mix with an electric hand mixer until well combined. NB butter needs to be very, very soft for this method to work.
- Spoon into prepared cases, place 1/3 of a caramel into the small muffin cases and push it down a bit.
- Place in the preheated oven and cook until lightly golden. I think my mini muffin size took about 25-30 mins and the larger ones about 30-35, but if your oven is hotter, start checking sooner.
- Remove to a wire rack until completely cool, then ice with the buttercream.

- For the butterfly cakes, cut a circle of cake out, making sure it isn’t too shallow, then cut it in half to form the butterfly’s wings. Put a splodge of buttercream into the hollow you have created and place the wings back onto the cake. A dusting of icing sugar is very decorative, but I forgot!

Comments: These were well received and the caramel came as a pleasant surprise to those who ate them! The only negative comment was from people complaining about nearly breaking their teeth on the little coloured balls - well, you can't have everything and beauty(!) and practicality sometimes aren't compatible! (I'd leave off the coloured balls if you were giving them to people with funny teeth - perhaps hundreds and thousands would be better!)