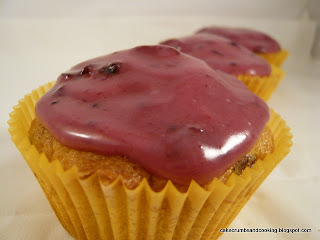 I wanted to say Banana and Blackcurrant Buns because that's how I think of these (and who doesn't love a bit of alliteration!) but then I wondered if the wider world would be confused by the use of 'bun' to describe a small cake. So I went with cupcakes. But if I start referring to buns, that's what I mean.


Anyway, enough musing on descriptions. I had ripe bananas. Quite a lot of them so I knew that I needed to use some to bake with. I quite fancied a simple little recipe, with the addition of banana and after a little searching came up with this BBC Good Food recipe for Dotty Banana Fairy Cakes. And then I wondered how I could make them more interesting. A while ago I bought some 'Fruit Flakes' which seem to be marketed to the parents of small children as a lunchbox addition. At least that's the way it seems to me. I don't think these are a particularly wholesome treat, in that they're fairly highly processed, but there's nothing too spooky (the usual sugar, thickeners, flavour, colour....) on the ingredients list either. I forget why I ended up buying them. I had some blackcurrant ones and decided to add them to my recipe too, to see whether they'd work or not. 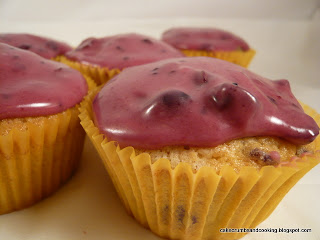 - Preheat the oven to 180C/Gas 4. Place 11-12 cupcake liners into a muffin tin. I got 11 from this mixture, but you could make 12 slightly smaller ones.
- Beat the butter and sugar until light and fluffy.
- Add the eggs, flour and mashed banana and beat again.
- At this stage my mixture looked quite dry so I decided to add 50g fat free yogurt.
- Fold in the fruit flakes and divide between the cases.
- Bake for 25-30 minutes until risen and golden.
- Allow to cool.


For the icing, mix the jam and icing sugar and very, very carefully and slowly add water to your desired consistency. Dollop the icing onto the cakes and spread it around. It will slowly spread on its own too.... 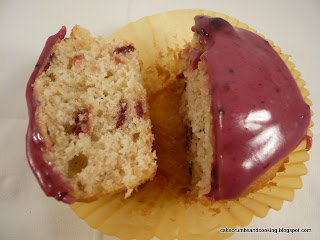 I had lots and lots of positive feedback about these from colleagues, one of whom said these definitely ranked among the best cakes I have made. I thought they were good, but perhaps not quite that good! The icing worked really well - the blackcurrant jam (although sweet) meant that the icing wasn't sickly sweet as the blackcurrant bursts were slightly sharp (I love blackcurrant jam, I can eat it off the spoon...) and the cake was good too, light and moist. The banana flavour was in the background and the fruit flakes worked well. Because they're processed, the flavour is concentrated and therefore not lost on baking. They didn't melt away during baking and provided a nice burst of blackcurrant flavour in the cake. I have also (ages ago and haven't got round to blogging the experiment) tried the strawberry fruit flakes the same way and they're equally successful. According to their website the available flavours are strawberry, blackcurrant, orange, tropical and raspberry. I've seen the orange locally but would be interested to find the raspberry (not that I've made a particular effort to find them!). 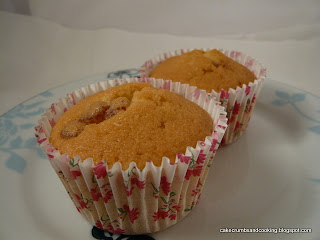 This is not a sponsored post, I bought this random stuff myself!
Posted by Caroline at 22:00

I'm always looking for a banana recipe and this looks great. I've never tried baking with fruit flakes so it's good to know that it works. Love the icing on top.

Great little cakes C, love blackcurrants in baking, but buns definitely. Think of cupcakes as having loads of buttercream and much taller.

These look lovely! And I accept bun for fairy cake if it's said with a Northern accent of some description.

Thank you for sharing your recipe Caroline; I shall look forward to giving this one a try. x

It took me a while to get used to E saying buns instead of little cakes - we grew up saying little cakes or fairy cakes and it seems a shame everyone says cupcake now!

Love your use of cereal in the cupcakes (oops should I say buns!) and the colour of the icing is brilliant