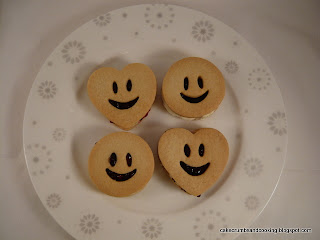 I often wish that I had stronger willpower when it comes to resisting things I see that I could use to bake with. I'm sure I'd be a lot better off without some of the things I buy, but it'd also be a lot more boring! That's my excuse and I'm sticking to it.

Anyway, I recently saw some biscuit (cookie) cutters in Lakeland and couldn't resist buying them. I  then made the leap from buying them to actually using them (this happens less often than it should!). Having seen Ros of the More than Occasional Baker using them very successfully I decided I would use her simple sugar cookie recipe for my own attempts. You probably wouldn't guess from the content of this blog, but I actually eat more biscuits than cake, it's just that I don't make them very often. I have a tendency to burn biscuits and they just never seem very successful so it was with some trepidation I set out to make these biscuits.

I needn't have worried though, the recipe was easy to use, and along with Ros's tip about chilling the dough they were very successful, thanks Ros! 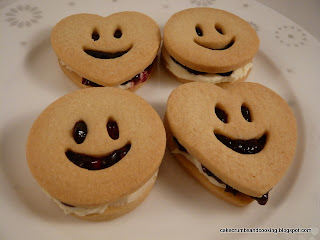 Method
- Preheat the oven to 175C/Gas 4. Line baking trays with parchment paper.
- Cream together the butter and sugar until light.
- Add the egg and vanilla and beat again.
- Add the flour and fold in. Divide the mixture into two flat discs and refrigerate for around 30 minutes.
- Roll out to your desired thickness (a few mm is fine) and cut out your cookies. Place on a parchment lined baking tray.
- Return to the fridge for 10-15 minutes.
- Bake for around 10 minutes, until going light brown. Mine took a few minutes longer, but watch like a hawk because they'll overcook quite suddenly.
- Transfer to a wire rack to cool.

When cold sandwich together with white chocolate buttercream (50g butter, creamed with 70g icing sugar and then 30g cooled melted white chocolate added) and the jam of your choice - I used blackcurrant. 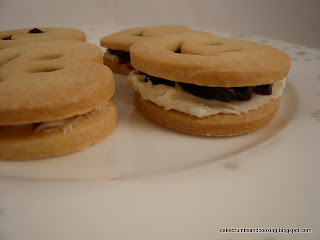 These were great - I'll definitely have to make my own biscuits more often. They were a lot easier than I was expecting and the dough was really easy to work with too. It was easier when still chilled though, and when it warmed up and started to soften it became more difficult to work with.

They went really well at work - the crisp biscuit worked well with the soft, sweet buttercream and the slightly sharp jam. In essence, very posh jammy dodgers! Some of my colleagues were greatly amused to find that when bitten into jam oozed out of the eyes of the biscuits - what can I say, I have colleagues with a slightly twisted sense of humour.... (They were right though, the eyes do tend to bulge a bit!)

I'm entering these into Teatime Treats, the theme this month being biscuits/cookies hosted by Karen of Lavender and Lovage, cohosted by Kate of What Kate Baked.

I'm also entering them into Jac's Bookmarked Recipes - I was pleased to have made these quite quickly after bookmarking them and even more pleased that I got round to using my shiny new biscuit (cookie) cutters!
Posted by Caroline at 09:55

not sure if my previous comment got through - I love your biscuits - made some similar recipe last week without the filling and unfortunately no bulging eyes :-)

these biscuits are so cute, and look very yummy. I like the bulging eyes. :) x

They look heavenly and perfectly baked too. I'm not a great one for biscuits, probably because I don't drink coffee or tea, but I am craving one of those. I am also very tempted to head over to Lakeland for the cutters. Shhhhh! Don't tell my hubby!

Oh and thanks for adding them to this month's Bookmarked Recipes :)

I have a set of these cutters - I really need to use them because they're lovely.
Your biscuits came out so well - love how the biscuit kept its shape and the features stayed crisp

These are so cute! Well done!

Awww they are just adorable!!! Th minute the first photo came up it brought a huge smile to my face.
Love them!!!

What lovely cookie cutters- such cheery, happy little faces! I too end up buying lots of baking paraphernalia that I often don't get around to using. Andrew reckons I'm like a magpie in a cookshop... he isn't too far wrong!

They are so cute and perfectly made, who could resist one of those for tea?

These biscuits are simply adorable and I think you were fully justified in buying the cutters. Any biscuits you make with them will immediately put a smile on someone's face. - even if it is the biscuit ;-)

Those are really fun, I thnk about jammy dodgers, never made them but I do like them. I always find biscuits tske longer than I think to make but I am tempted by these. Hope all is well with you C ! joanna

Your cookies look so perfect and beautiful! Love the buttercream and jam filling - I'll have to dig my cutters out and have another go! Thanks for the mention :)

I LOVE these Caroline, I am a BIG fan of funny faces! Great TTT entry, Karen