Not Quite Edd Kimber's Cinnamon Buns 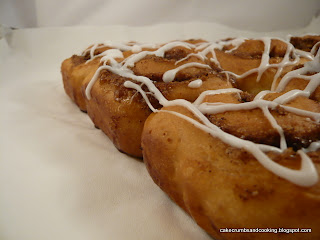 Way, way back in October there was a feature in the Waitrose Kitchen magazine about baking books. Presumably to round up the books that were released last autumn in time for the Christmas present buying. There are quite a number of books featured, one of which is Edd Kimber's second book, 'Say it with Cake'. The recipe given from this book is his Cinnamon Buns.


I had a desire to make something different (and a little indulgent) for breakfasts at the time and decided to give the recipe a go. I'm not sure why it's taken me so long to get round to writing these up, because they're actually very good! I've had a quick look around the net and can't find an authorised reproduction of the recipe, but it is a reasonably standard enriched milk dough, with a little butter and a little sugar added along with an egg. 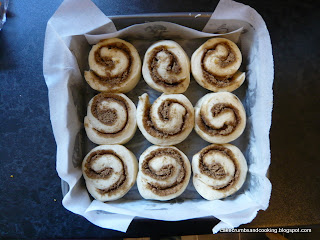 The recipe was for 16 buns and I can see from my photos that I only made nine, so I'm assuming I halved the recipe. And since the recipe for the dough contained an egg, I'm certain I missed this out. The filling in the recipe consists of butter, light brown soft sugar, currants and cinnamon, 3 tablespoons of it! I have a bit of an on-off relationship with cinnamon and am usually more off it than on. The thought of three tablespooons (or even one and a half for my halved recipe) was rather a lot and I decided to switch for mixed spice, which I am really very fond of. It does contain cinnamon, but tempered with the flavours of other spices too, which just makes it much more appealing to my tastebuds. I also decided to leave out the currants (I never claimed to be following the recipe exactly!). 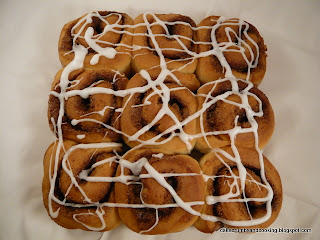 There is a topping of cream cheese, icing sugar and milk given to drizzle across the buns, but because I was going to be freezing these I decided that I would use a simple glace water icing instead, which worked just as well. 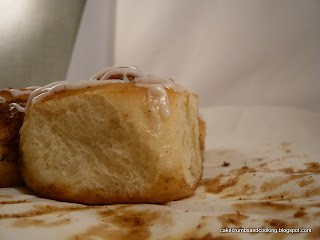 These were gorgeous - the enriched dough was soft and sweet and I was really taken with these buns. I was glad I used mixed spice for the filling and missed out the currants (they're another thing I can take or leave) and the incredibly sticky filling and sticky icing on the top made these a very delicious breakfast indeed. An excellent recipe and one I should return to.
Posted by Caroline at 22:00

Looks like they rose well! I love a cinnamon bun. I actually saw Edd Kimber at the Tate & Lyle event I went to yesterday, but I didn't meet him.

I don't know why but I have a thing for sweet bread recipes that rise together like this... it's like they're all hugging in the oven... beautiful recipe, they look adorable x

Mmmmmmm buns, I dream of buns at this time of the year and envy any one that has time to make them. That means you!

They look really wonderful. I've never gotten around to making these yet.

Haha, halved the recipe indeed! Nine huge buns is what it looks like to me ;-)

Your dough looks wonderful, much better than mine did. But they are so delicious and I've no idea why I haven't made them again. I like your artistic drizzle over the top, it makes them look quite professional.

mmm my go to recipe for cinammon buns is Nigella's in Domestic Goddess, but a couple of people have mentioned this one recently, may be next time!