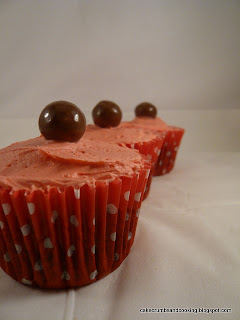 Or should that be Pink Nose Day? Well, as I'm sure you can probably guess from the title (and the fact that in the UK it was Red Nose Day on Friday with a staggering, record breaking £75 million raised on the night alone) these were supposed to be red noses. I always forget (not being someone who uses food colouring very often, if at all) that adding food colouring to buttercream is never really very successful in creating bright primary colours such as red. I actually did use gel food colouring here, so was expecting a redder red, but was probably too reticent to add enough colouring to achieve the colour I was after.


So not really the most inspiring or successful decoration really and I wasn't going to bother talking about these, but it's always worth talking about Comic Relief - it's an excellent way of putting fundraising for charity into people's minds. 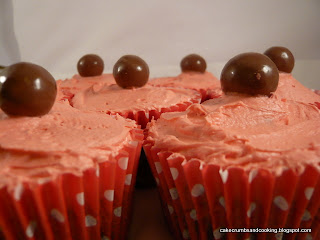 The other reason it's worth talking about these cakes is because the sour cream chocolate cake is delicious. Really good. The recipe is Nigella Lawson's, from How to be a Domestic Goddess and so I won't reproduce it here. However, her recipe for Old Fashioned Chocolate Cake is very similar and can be found on Nigella.com. The differences are that the Sour Cream Chocolate Cake uses only 3/4tsp baking powder and 1/4 tsp bicarbonate of soda, adds a little salt and uses 1 1/2 tsp vanilla extract. There is also 25g less butter in the web version. Not massive changes.


As I wanted cupcakes I divided the mixture, unsure of how many it would make and got 17 reasonable sized cakes that baked in 22 minutes. I was surprised that the baking time was so quick - the ingredients were pretty much fridge cold when they went into the oven (cold sour cream and cold eggs) but they rose beautifully. I'll definitely use this recipe for cupcakes again if I want a rich, chocolatey base. They were deliciously smooth and very chocolatey. 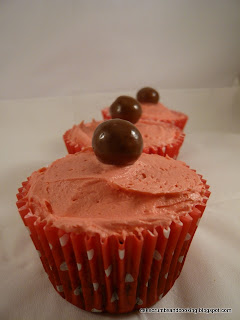 These are super-cute!
Love the white chocolate in the butter icing, looks like a great mixture to use for the cake too.

They look great, red or not :)

So cute! Who cares about the colour when there's a pretty little malteser sitting on top of it?

I've been finding myself adding more and more yogurt or sour cream to cakes in recent weeks so am truly converted too! And such a successful night of vital fundraising.

It is the intention rather than the colour that counts - I have only ever had success with making red icing by using lots of red powdered colour (and I mean a lot!). We have jaffas in Australia which are red round sweeties that would be perfect for red nose day but don't know if you have an equivalent