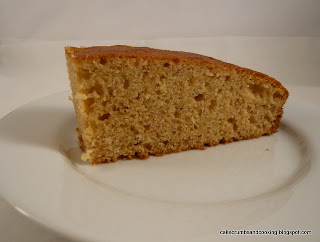 I frequently pick up the recipe cards that are available in the supermarkets. I think I must have picked up over a hundred over the years, and due to my squirrelling tendencies they don't tend to get culled very often. In my defence, however, occasionally, I will recall a recipe card with something I thought looked particularly good, but for whatever reason didn't get made at the time of picking up the card. That's the case with this recipe.


It was on a card from Waitrose (who do tend to have particularly interesting looking recipes - to my mind at least) and was for 'Sticky honey, almond and banana cake'. There was the immediate problem of having to substitute for the almonds - both ground in the cake and flaked on the top, but that was easily solved by substituting plain flour for the almonds and leaving off the topping. 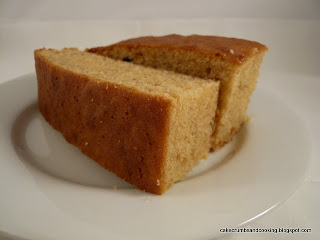 You can find the original recipe here on the Waitrose website, and apparently I've been meaning to make it for a year now, having first seen the recipe in March last year. I also thought that since I was already adapting the recipe I'd make it cheaper by using golden syrup instead of honey (and for bonus points my golden syrup was on offer when I bought it!). I decided to use an 8" square tin (20cm square), which is about 15% smaller than the stated tin size, so I was prepared to give it a little longer in the oven than the stated 30-45 minutes.

So here is my adapted version...

Method
- Preheat the oven to 180C/Gas 4. Grease and line an 8"/20cm square tin with parchment paper.
- Melt the butter, sugar and syrup. Remove from the heat and allow to cool slightly (I didn't leave mine very long at all).
- Mix together the flours in a bowl and add the melted mixture followed by the mashed banana and beaten eggs.
- Beat well (I did this by hand) to give a smooth mixture (well, smooth aside from the lumps of banana...) and pour into the prepared tin.
- Bake for around 35-40 minutes until risen and golden and a cake tester comes out clean.
- Allow to cool on a wire rack.

I served mine cut into 12 fingers. 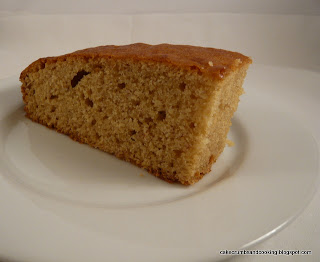 This is a really useful recipe for when you need to use up just one banana that is well past it's eating best (in my opinion at least). Although it doesn't look anything special the cake was good - fairly moist (although it doesn't really look it) and with a subtle banana flavour. I didn't really get much flavour from the syrup, I'm sure the combination of honey and almond would have been much more flavoursome, but I did enjoy the cake as it was. I'll make it again, but now I know that the syrup flavour isn't particularly strong I think I'll add some spice next time - perhaps mixed spice, nutmeg or ground cardamom.

A very quick and easy bake, and I bet children would love to help with this one!

I'm going to send this to Credit Crunch Munch. It helpfully uses up that last overripe banana in the fruit bowl attracting fruit flies, uses syrup instead of expensive honey and is quick and easy to make. Credit Crunch Munch is hosted by Helen of Fuss Free Flavours and Camilla of Fab Food for All. The host this month is Helen.


I'd enter it into Dom's Random recipes too as the theme this month is cuttings, memories and clippings and I guess recipe cards would count. But I be lying if I said that the selection was random - I needed to use up the banana!
Posted by Caroline at 11:15

That looks like a really good cake! I wonder if subbing wholemeal flour instead of the almonds would work too?

Thanks for this! I just so happen to have a lone ripe banana waiting for something exciting to happen to it...

Looks lovely. I'm just the same, I seem to collect recipes and yet when I plan to bake something often go in search of a new one rather than one I have already collected!

I bet the golden syrup adds a great sticky flavour too. I bet it keeps well.

It looks delicious, I love golden syrup in cakes, must give this one a try !!

I love bananas as they lend themselves so well to baking, well done for turning this recipe into a frugal yet still tasty treat. Thank you for entering this month's Credit Crunch Munch:-)