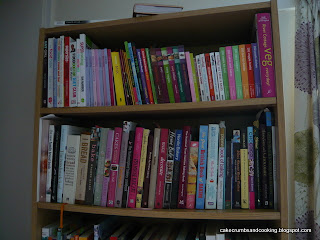 I am the first to admit that I am not a complete regular when it comes to entering the random recipes challenge. I always, always look up and see which recipe I would have got according to the rules of the challenge that month, but the recipe is rarely something I have either the time, ingredients or inclination to make, and so despite my best intentions I end up skipping month after month. But not this time. With no cooking involved I thought there was no way I could miss this one.... although the amount of time it has taken me to get photos almost made me too late. The problem is not the photos so much as the gathering of the recipe books from far flung corners of the house into their home the bookshelf. Yes, I have had to tidy up! (I really hate tidying up!) 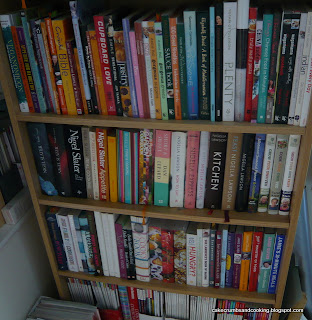 So here you can see my collection. They live on two bookshelves in my bedroom, one large one small and although there are still a couple scattered around the place this is the vast majority. None in the kitchen or living room here - just the bedroom. 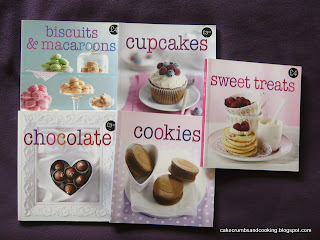 I don't know if anyone else has this problem but I have no idea how to organise my books - you can perhaps see that there are a number of different attempts going on at categorisation. There are some books categorised by author - you can probably see some spines you recognise (Nigella, Delia, Hugh F-W, Jamie Oliver) etc and then there are some that are organised by genre - vegetarian for example, or baking (there's pretty much an entire shelf dedicated to those ones!) or by publisher - a series of books published by Ryland, Peters and Small, and a series of BBC Good Food 101 books. But what to do with the BBC 101 Cakes and Bakes - with the series of the same publisher or with the baking books? The series above is one I particularly enjoy looking through - the recipes are great and the photography is fab. 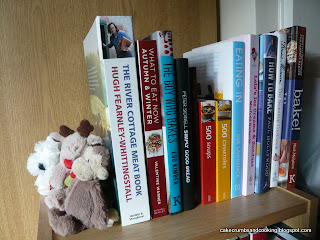 These are the newer acquisitions - no logical order at all. And a couple of old ones thrown in for good measure. 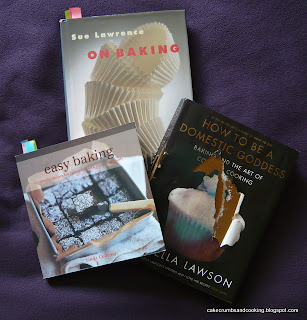 Needless to say I do not cook from all of them regularly. To my shame some of them have barely been opened, but in my defence some of them are regularly opened and read, even if they are not used as much as they might be. Inspiration comes from many sources. Anyway, above are some of my most used ones. Nigella had a bit of an accident with a halogen ring that was still hot, although off, so is looking rather the worse for wear. It's not a particular surprise that my most used books are baking ones is it??? 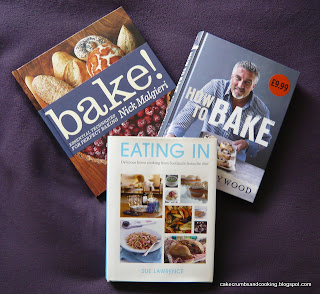 These are the newest ones - yet to be delved into thoroughly. I am rather suggestible though - someone out there (one of my particularly lovely blogging friends!) is responsible for one of these.... but I don't regret buying it! 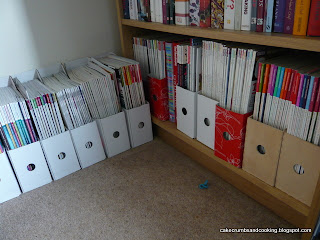 A few of many magazines...

I confess to being one of the world's worst hoarders - I hate throwing things away and have years and years worth of various magazines on subscription that I cannot bring myself to chuck out. However, I frequently re-read them and so justify keeping them to myself. I also am lucky enough not to have any space issues - it's just storing them tidily that's the problem! 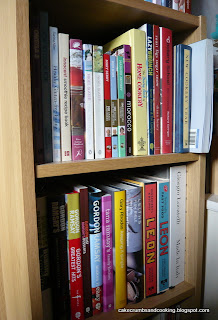 The second set of shelves - much smaller!


So there we are, a little peek into the world of my cookbooks. I've really enjoyed seeing everyone else's collections, so I hope you've enjoyed seeing mine too! 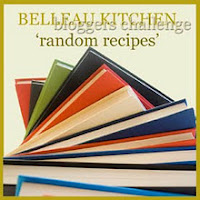 Hehehe...you'll enjoy that Malgieri books when you get into them, love. I have decided to embrace my suggestibility.. :D

What a lovely collection you have! My Pete decided to order all my books - by size - so now I have to remember how large a book is in order to find it on the shelf! :)

you should have whistle for your stray books so you can round them up at the end of each month... you have a great collection there and I love your new books... I'm glad you joined in this month and hope that you do play again and it's not too scary next month x

Wow, you have a lot of books. I recognise a lot of titles.

Are you a member of Eat Your Books, if not you should be. You add your cookbooks & some blogs to an online bookshelf, then you can do a search for a recipe, using ingredients and it will point you towards recipes & which book to look in. Fabulous. You can get a free membership and no I am not on commission, haha!

Impressive set of books - even more impressive collection of magazines. I must admit that I used to collect (OK, hoard) magazines but I got rid of them the last time I moved house. Dom should be ashamed of himself for making you tidy up.

Great to see your cookbooks!

Cookbooks do seem to have legs and wander about the house - which is right and proper seeing they need to continually advise and suggest!

I didn't tidy mine up for the event so some in random piles were unphotographed - so I am impressed at the order that appears in your photos, esp the magazines and also impressed that you refer to them frequently - I need to get my magazines into order where I can access them.

How funny - my Nigella Domestic Goddess book is the only one I've set fire too! Mine lost a fight with the blowtorch!

Is lovely to see all your cookbooks, and your stash of magazines! My stash of 5 years odd of good food and olive have mostly been culled now to make space :( I agree though is so hard to get rid of much loved clutter and still have a fair amount to hand!

I am also the same with any blog challenges - see what's in the cupboards already and if a match then go from there, providing of course I remember to take pictures anyway! Too many other boring stuff in life gets in the way lol :)

Oh C, you are a true baking addict. I sort of guessed you would have masses of books. I'm quite envious you get to keep them all in one place. If I could do that, all mine would be regimented and organised - by category rather than author I think.

It's great that you have a real collection of cookbooks and magazines. I do often regret the many many books I've got rid of in the past. Space has always been a bit of an issue. My ideal is to have a huge bookcase in a nice large kitchen where I can keep them all together - one has to have dreams. Mind you keeping them in the bedroom is a good idea too - that's probably where I look at them the most.

Celia - I'm sure I will, it's just making the time to look through it! Like the idea of ordering by size - it must look very neat!

Dom - I hope it's not too scary next month too. A whistle would be great, and if they could fly back onto the shelves too, that would be ace!

Jac - it's been interesting to see the matches hasn't it! Thanks for the link to EYB, I'll check it out.

Phil - that's a small minority of the magazines, I wouldn't have been able to round them all up for a photo. Dom did me a favour - I needed to tidy up!!!

Johanna - I can never find the one I'm looking for, or the recipe I think I can remember either!

CC - Well, my Nigella didn't have quite such a scare as a blowtorch - it was more of a gentle heating and 'oh what's that smell' moment...

Anne - I hate the idea of culling my magazines but I'll have to do it at some point :-(

Choclette - having seen some people's collections mine is pretty tiny - more excuse to buy some more!!!