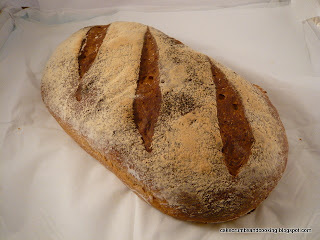 I suppose you could say this loaf has been a long time in the making. Not, I hasten to add, because it takes an excessively long time to make (although this is no bad thing with bread) but because it is another step on my bread making journey.
There wasn't really very much bread on the blog prior to the autumn of 2009, and the few bread recipes I did post weren't all that great. These Spelt and Rosemary Rolls looked fine, but my memory of them is that they were rather denser than I wanted, and the crust rather chewy. I didn't make all that much bread. Around that time I think I started to make more successful bread by following Dan Lepard's recipes and reading the comments people were making on his forums. I can't say everything was always delicious or always 100% successful, but the loaves started to be good enough that I didn't really want to buy bread any more. Occasionally I ran out of mine, or spotted something in the shops I fancied, and then I bought it. 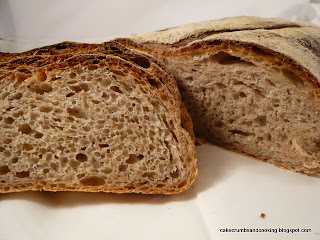 My bread making has come a long way since then and I rarely buy bread now - I am lucky enough to have time to make my own. I've picked up all sorts of tips and tricks that allow me to create the bread I want - soft, substantial, white, grainy, sourdough (well, that's very much a work in progress) I can now often (but not always) get the outcome I want. And I often know why something hasn't worked too, or can think how to tweak it. It always seems to me that it takes an age to acquire a skill, and when I look at other people's blogs with their fantastic photography and wonderful loaves I wonder why it seems to take so long for me to improve. I guess partly I'm hampered by lack of practice - I balance the bread I bake with the bread I eat and don't have hoards of people munching through my loaves to afford me more practicing space (I'm sure many of you would be grateful to have your bread last a few days without needing to rebake!).
So anyway, this loaf is a combination of many things, and it didn't turn out perfectly (it was a little soft and didn't rise up as much as I would have liked, more outwards). But when I look back on where I've come from with bread, this is a million miles from how I started. 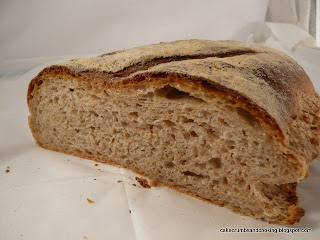 Wholemeal, Oat and Mixed Flour Loaf
Ingredients
40g rolled oats
200g very strong white flour
150g wholegrain flours (I used about 130g wholemeal spelt, with about 10g wholemeal rye and 10g wholemeal, just because I wanted to use up odds and ends)
1 tsp salt
1 generous tsp fast action yeast
Method
- Pour 300ml boiling water over the porridge oats in a large bowl. Cover with clingfilm and leave to cool until comfortable to the touch.
- Add the flours, salt and yeast and mix to a soft dough.
- Leave for around 10 minutes and then gently and briefly knead the dough.
- You can repeat this kneading if you want, a couple more times at short intervals (10-20 minutes) but I don't think I did this time.
- Leave the dough until it has risen appreciably. Knead briefly and then form into your desired shape. I chose a baton/torpedo type shape.
- Leave to proove again until risen, but not doubled. (I think this is where I went wrong - the oven was occupied and the dough had to be left out too long. I was itching to get it into the oven, but there was a partially baked cake in there. Such is life)
- During this time, preheat the oven (if not already being occupied by a cake) to Gas 7/220C.
- Steam the oven, slash the loaf and bake at 220C for 10 minutes. Turn the oven down to 200C/Gas 6 and bake for a further 30 minutes then turn upside down and bake for 10 minutes more.
- Allow to cool completely on a wire rack before slicing and enjoying. 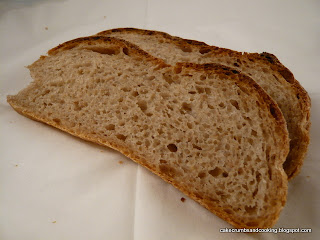 This is one of the softest wholemeal breads I have made. The oats aren't a noticeable flavour at all (in fact I forgot they were there until I found a little piece of oat husk in my sandwich one day!) but provide moisture to the loaf (and some added fibre). Soft and delicious yet substantial too. Great for lunchtime sandwiches.
A lot still to learn, with baker's yeast and without, but if all my bread along the way can be this tasty I am happy to plod along at my own pace. 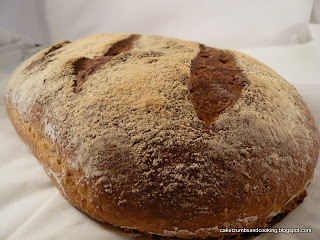 Beautiful looking loaf, Caroline! Isn't homemade bread just one of the greatest joys? We haven't bought a loaf in years. :)

a beautiful looking loaf... ahhh, baking bread is the BEST!

funny that you feel your bread development is slow - it seems far quicker than mine but I don't bake as much as you - I go hot and cold on the bread baking (sometimes literally with the weather and sometimes with energy). But it is nice to understand baking - and I think blogging is a great way to do this. Your bread looks wonderful - I can get white bread soft and lovely but am still experimenting with wholemeal - am interested in your comments on oats as I have been wondering about throwing them into my regular bread recipe

Your loaves always come out so impressive - I'm very jealous of your mastery of yeast!

Celia - Thank you! Yes, it's so nice to be able to make my own bread and customise it how I like. I'm very lucky!

Dom - bread baking is so satisfying when it works!

Johanna - I was a bit on and off with making my own bread for a couple of years. I really think it was Dan Lepard's recipes that proved to me that I could manage to make my own bread routinely. I wouldn't want to go back to buying now at all but I'm lucky enough to have enough time to make my own.

CC - thank you for the compliment, but I really don't feel I've mastered yeast - nowhere near! But that means more experimenting!

Baking bread creeps up on you and then one day you realise that your own bread is infinitely preferable to almost anything that you can buy. I would love some slices (OK a whole loaf, but I was trying not to be greedy) of your great oat and wholemeal loaf. It looks really good!