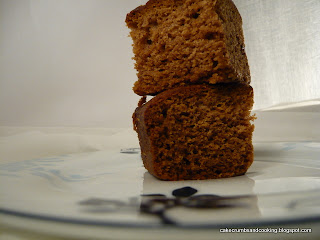 Hugh Fearnley-Whittingstall (from now referred to as HFW) is well known in the UK. He has a River Cottage 'empire' and a regular column in the Guardian. He has campaigned on a number of important issues (Chicken Out!, Hugh's Fish Fight among other) and has a number of books too. But this cake isn't really all that much to do with HFW. There is a series of River Cottage 'Handbooks' published by Bloomsbury, of which I have a couple. The one that this recipe came from is 'Cakes' by Pam Corbin. Pam appears to be a very talented lady; the other book I have by her is the 'Preserves' book of the same series - her nickname is 'Pam the jam'. You can find out a little more about Pam here and here. 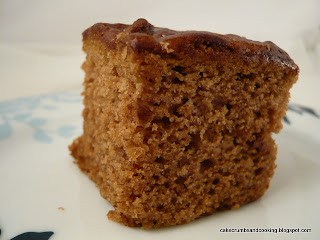 The cake came about because I was browsing simultaneously through my (very disorganised, overflowing) cupboards and the aforementioned Cakes book. The unopened jar of honey and the recipe for a spiced honey cake coincided and this cake was baked. You may think this is a slight simplification of the process, and indeed it is, but this cake really isn't all that difficult to put together. Pam notes that it is a family filler type of cake from the 1950s remembered by her friend as a 'beach and picnic' type of cake. I love the Enid Blyton scene that this creates in my mind - jolly outings where the family pile into the car, Father driving, Mother supervising and children excitedley chattering in the back seats. No seatbelts of course. It's the kind of cake you can imagine being handed out after exploring the woods, swimming in a river and having fish paste sandwiches. Easy to make and easy to eat.


This is a lovely old-fashioned cake, the honey combining with ginger and helped along by a little cinnamon and a pinch of cloves. The yogurt in the cake makes it light and moist (I used full fat Greek yogurt as this is what I had in the fridge, but I think in future I'd just use a normal or low fat standard plain yogurt). Pam notes that the cake keeps well in an airtight container for a couple of weeks, which makes it handy to have around for if you are expecting visitors but don't know how long they'll stay or how much cake they'll eat, or for if you need to provide cake on a Thursday but need to bake on Sunday. 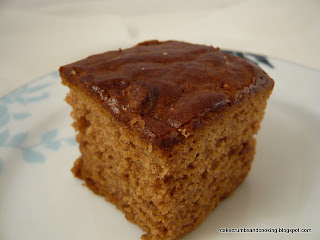 Light, fairly moist and with a more complex spicy flavour than just ginger, I have to admit that I couldn't really taste the honey in the cake, but it was delicious all the same.

I have also submitted this cake to Jac's Bookmarked Recipes event. It was bookmarked from Pam Corbin's  'Cake'.
Posted by Caroline at 16:15

Lovely texture, looks like a lighter gingerbread. I think I might have been one of those Enid Blyton children, mum always made cakes and took a gingerbread and a huge Dundee Cake on holiday. There were no seatbelts, however I never did catch any smugglers/spies/burglars on my holidays!

It looks old fashioned! I love how it looks so humble but I bet it has a deep deep flavour! Lovely.

I've only had hone cake once and it was lovely. Love the sound of this one with all the spices.

This looks like absolutely my sort of cake! Just simple and lovely.

Mmm, that sounds lovely. Have you tried Gill's honey cake from that book? It is one of my favourite cakes EVER. It looks quite plain an uninspiring but is just gorgeous, especially if you love honey.

This looks delicious! Just found your blog and am having a good look through all your recipes, they look great :)

This cake looks divine - I find it coincidental that only yesterday I posted up honey spiced biscuits :D
Nice wavelength!

One slice would never be enough of something like this - yum!

Janice - I guess it was a little like a lighter gingerbread, but much lighter. Your holidays sound lovely!

Dom - it isn't spectacular in the looks department I admit, but it does taste lovely.

Katie - the spices were quite subtle, but it was a nice addition.

Foodycat - that's it - simple but lovely.

Underthebluegum - I haven't tried Gill's honey cake - I can't have the almonds, but it does look really lovely! Glad to hear it's a good recipe :-)

Sarah - hope you enjoy the blog, thanks for commenting!

Guru Uru - I'll have to pop by and see your biscuits!

Johanna - it's the kind of childhood we all wish we'd had isn't it!