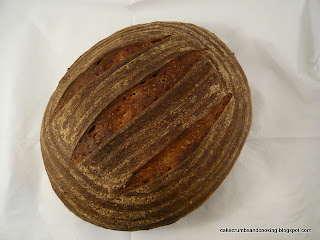 Woo-hoo! Sourdough success! Thanks are again due to the amazing Mr Lepard (plus my sourdough starter, more on that later) and his book The Handmade Loaf. Every time I look at this book I find breads that I really, really want to make. There are some breads requiring only commercial yeast (fresh/dried), some requiring only sourdough and a few hybrids too. There are even some that don't need yeast at all, but they ones that always seem to catch my eye are the sourdough breads. 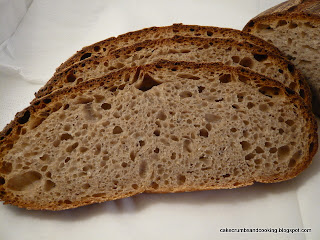 I have to admit that this is only based on Dan's recipe. I don't currently have a rye sourdough on the go and didn't want to convert my white sourdough so I just made a straight substitution of white sourdough for the rye specified in the recipe. I kept everything else the same though and halved the recipe. 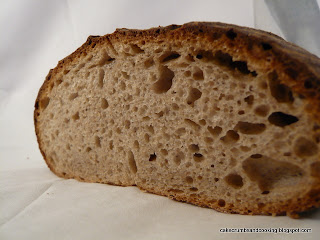 My sourdough had spent a while sleeping in the fridge and when I came to wake it up again it seemed rather sluggish. After a couple of refreshes it wasn't quite smelling how I expected and I wondered how I could boost it. A couple of tsp of natural yogurt came to mind - the acidity and the bacteria help balance the culture. I didn't have any yogurt. Well, only rhubarb flavour, I didn't think my yeast would appreciate that. So I had a think about what else was acidic and hit on the idea of adding a little vinegar. No bacteria to help out, but acidity in abundance. I probably only added 1/2tsp or a tiny bit more, but the next day my starter was frothing away, more active than it's ever been! Has anyone else out there ever fed their starter a little vinegar to help the acidity? All knowledge gratefully accepted!
The second prooving step did take quite a long time to get to the puffed up stage you see in the prooving basket below, but I was occupied with other tasks so the wait didn't seem onerous. There was a moment of tension as I upended the banneton and hoped that the loaf wouldn't stick.... some of it was reluctant to leave it's wicker home, but going gently with it and a little coaxing released the loaf intact. I think perhaps I over-proofed it slightly as there wasn't very much oven spring, a little, but not much. The slashes have opened out but the loaf is a slightly slumped shape. I'm not complaining though because the crumb is excellent. 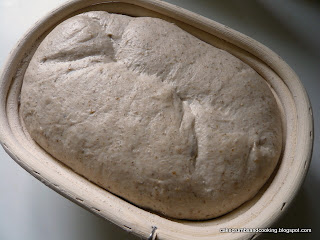 I think next time I'll have the oven as hot as possible to get the oven spring I'm looking for, but then turn it down straightaway, to prevent the loaf becoming overbrowned. This is just the right side of burnt, but only just! 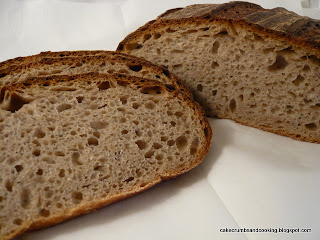 I'm really pleased with the crumb texture - it was even throughout the loaf rather than some of my past efforts that have been full of massive holes in some places yet quite dense in others. This is definitely the best yet but I'm not complacent - this is just the beginning of the sourdough adventure. 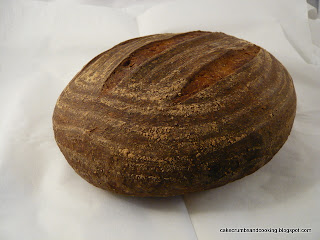 That is one perfect looking loaf of sourdough. Well done ;0)

Wow C, this looks fantastic, a very well formed loaf I would say. I'm really intrigued by the mix of barley and rye. It's probably a difficult one to answer, but what did it taste like?

I haven't made this one in a while but from memory it looked very similar, in fact the crumb wasn't probably as beautifully even as yours. Gorgeous!

As to your vinegar question it might be one to ask on Dan's forum. If my starter is sluggish I find it needs three refresh cycles over 36 hours to get it up to speed again.

That just looks wonderful. I'm waiting for the kitchen to be completed before I start my new starter but I think I may treat myself to Dan's book as I've heard so much about it. Thanks for the inspiration!

Woohoo, look at that!! What a glorious dark crust and perfectly formed slashes. Know what you mean about Dan's book too, even years later, I'm still finding things in there I want to bake.. :)