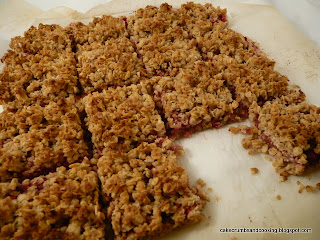 These were a very quick and easy bake that I spotted in a recent issue of BBC Good Food magazine. They ticked all the boxes - super quick to make and bake, reasonably cheap to make (especially if you use frozen fruit) and fairly healthy to boot. Well, they only contain 50g of butter for the entire tray, and they've got fresh fruit and oats too so although they aren't as healthy as say, a piece of fruit, you could certainly do worse!
I adapted the recipe slightly, and as I said, I used frozen fruit. I allowed it to thaw first, before mushing it up as stated in the recipe. You can find the original recipe here.
Raspberry oat traybake
Ingredients
200g rolled oats
50g medium oatmeal
150g raspberries, thawed if frozen, then mashed to break them up
1/2tsp vanilla extract
50g butter
75g runny honey

Method
- Grease and line an 8" square tin (20x20cm). Preheat the oven to gas 7/220C.
- Melt the butter and honey over a gentle heat.
- Mix in the oats, oatmeal and vanilla if using.
- Spread about half of the mixture into the tin and press down.
- Spread over the raspberries and then sprinkle/spread over the remaining oat mixture.
- Bake for 10-12 minutes until golden and crispy. 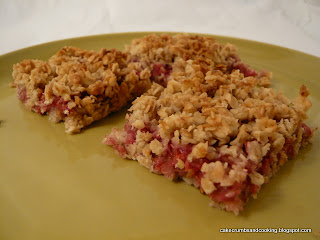 I used a mild honey, so it wasn't too obvious in flavour. I wouldn't bother adding the vanilla again, it got lost in the other flavours, although I had thought it would go well with raspberries. I think I baked mine at gas 6 rather than gas 7, but can't honestly remember, which is a pity because they were indeed browned at 12 minutes, as suggested by the recipe. Perhaps I did use gas 7 then...
I think next time I'll use more fruit because 150g only gave a very thin covering. I also used slightly more than half of the mixture to cover the base, and then sprinkled everything that was left over the top.
As you can imagine, without very much fat to hold them together they were very crumbly. Not so that you couldn't pick up a piece, but you had to be careful. I really liked them and can see them becoming quite a regular quick bake for when I can't think what else to make - they made a perfect small midmorning snack. I think they'd also be great with blackberries (though you'd have to make sure to squash them up well, and might need 200g to get a layer), or perhaps even very finely chopped stone fruit like apricots or nectarines. All sorts of possibilities! 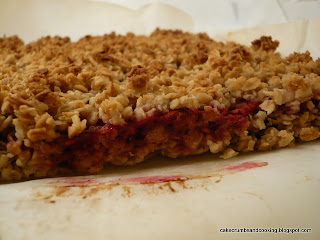 not so crazy about stuff like this but I think the raspberries may have swung it in my favour... looks very intriguing... I may give it a go!

Looks yummy. My mum used to make soemthing similar with raspberry jam when we were little. Love the sound of using actual fruit

Great minds think alike! I made these too, although I didn't have the right sized tray so mine ended up being dud's. Still tasted nice tough, yours are far more successful.

Dom - let me know what you think if you try it!

Katie - it's really easy. I'm trying to think if it would work with rice flakes or another gf alternative, but haven't really got much experience.

Chele - give them another go then - it was a really easy recipe and as you say, very tasty!

Celia - indeed! They were pretty crumbly though - just not enough butter to solidify and hold them together. It did mean that the tasty oaty flavour came through though, I love the flavour of oats!

I can imagine that warm with icecream as a pudding, too!

Johanna - thanks! I think that there really isn't enough butter and syrup to hold this one together, but on the plus side you get more of the oaty taste!

Looks yummy, I have some raspberries in the freezer and this would be a good use of them, I love anything involving oats!