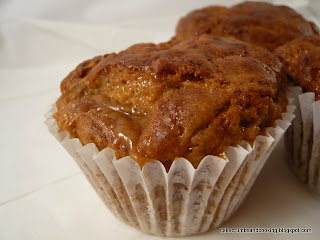 I was sorting through my baking cupboard the other day and amongst the (many) ingredients I found that I either wanted or needed to use up was a tin of caramelised condensed milk. OK, in all honesty there were two tins.... what can I say? They must have been on special offer (I am the marketing man's idea of heaven, with suggestible tattooed across my forehead). A while ago, because they both need using up!
So where to turn for inspiration on what to do with the aforementioned caramel? Well, how about the manufacturer's website?! It wouldn't usually occur to me to be so sensible, but I was already aware of the carnation website (probably because they went through a phase of advertising it by posting yummy looking recipes in quite a lot of the cooking magazines I get) so that's where I headed, and after browsing through all of their baking recipes, I decided on the Banoffee Muffin recipe. 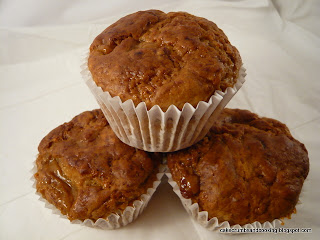 I fortunately had the required over-ripe bananas, well, I only had one, but it was a monster with black speckled skin, threatening to overwhelm anyone who entered the kitchen with its sickly sweet pungent banana aroma (I do actually like bananas, just not when they're that ripe). So the muffins were the obvious choice.
I followed the recipe as given apart from baking them for another five minutes or so. And I obviously didn't add the optional pecans, but I imagine they would be nice, and give a welcome crunch to the soft muffin. I had quite a bit of mixture left over, probably almost enough for another muffin. Which was annoying. I couldn't fit any more mixture into the cases and as it was quite a few decided to overflow slightly, so although they don't look very peaked, this isn't because there was a mean amount of mixture. 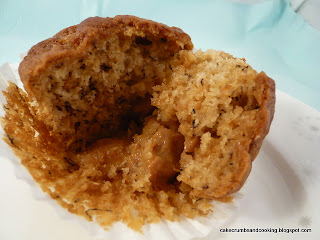 Verdict? Well, they had the desired effect of using up the blackening banana and a can of caramelised condensed milk very effectively. They were nice, but I don't think muffins are my favourite form of eating cake really. The tops were nice and soft and gooey, and the crumb was soft and tender, and not too sweet, until you hit a sweet pocket of caramel. I made sure to keep the blobs of caramel quite big, and it worked well as you can see. They were nice, but I wouldn't be desperate to make them again. On the plus side, they were quick and easy enough to make on a weeknight evening to take to work the next day, always a bonus!
Posted by Caroline at 20:15

Oh-la-la! My Hubby would love these, only problem is he is supposed to be on a diet! Maybe I could make them as a wee treat and freeze the rest?

I would love these - banoffee is my fav dessert!

I do too love a banoffee treat-its such a lovely, creamy and decadent dessert! I'll check out the carnation website-I think quite a few manufacturers are increasing the number of recipes on their sites. I've noticed lots of ads in the foodie mags from Hellmans and Philadelphia.

Chele - I'm sure you could freeze them. The recipe suggests warming them up the next day anyway, so you could do that to frozen ones - yum!

Kate - the carnation website is pretty good - lots of ideas there. Thanks for mentioning those others, must check out the philadelphia website, I'm always on the lookout for ways to use up half packets of cream cheese before it goes off!

Love the sound and look of these Banoffee Muffins!

This sounds like something I should take note of, since I always have bananas going off - I buy them with the best intentions but always avoid eating them. Maybe in muffin form I would have more luck!