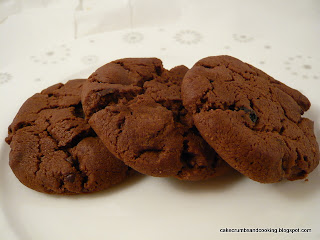 Sorry about the lack of activity round here. I've got lots and lots to post but have been unexpectedly without internet access for the past few days - I was staying in a hotel that I'd expected to have wi-fi and had been planning to catch up on some posting, but there was no wi-fi, so obviously no posting! Never mind, I'll try and make up for it now. Starting with 101 uses of a tin of condensed milk. Well, perhaps not quite. When I made these caramel muffins I not only found Carnation Caramel, but tins of condensed milk too, my cupboards truly are a voyage of discovery sometimes!


A recipe in the current issue of the Sainsbury's magazine (June 2011) had caught my eye, and required 2 tbsp of condensed milk. Obviously it's not ideal to open a can for just 2tbsp (unless you want to risk eating the rest just as it is....) so this post is the first of a mini series using condensed milk. Onto the recipe... 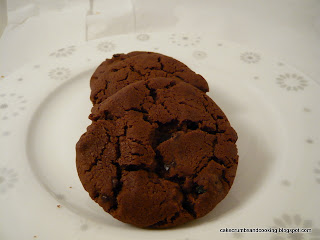 * I think I used slightly less cocoa, because 50g is an awful lot, and then just added a little more flour to substitute. I think I used about 30g cocoa powder.
Method
- Preheat the oven to 150C/gas 2. Line a couple of baking trays with parchment paper.
- Cream the butter and sugar together until pale and fluffy.
- Beat in the condensed milk and then add the flour and cocoa and mix. Stir in the chocolate and blueberries.
- Roll into 12 walnut sized pieces (I got about 25) spacing well apart on the baking tray. Flatten slightly then bake for about 25 minutes** (I did 20 and they were overdone) until firm at the edges but soft in the middle.
- Leave to cool for a few minutes before transfering to a wire rack to cool completely.


**Gas 2 seemed very cool, so I used gas 3 and baked for 20 minutes. I forgot that because the recipe was only supposed to make 12, so mine were effectively half the size, that they'd need less time anyway. They weren't burnt, but they were definitely overdone - lovely cookies, but too crispy.
Originally from Sainsbury's magazine, June 2011. 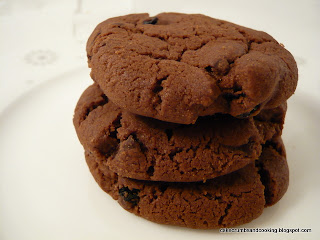 These were nice cookies, but as I say, I definitely overcooked them, and they deserve another chance. I do like the combo of dried blueberries and chocolate. I used quite big chunks of chocolate rather than choc chips, and it was nice to hit a big lump of chocolate; I bet they'd be great warm, or dipped in coffee! They aren't as good as the world peace cookies though! Other flavour variations suggested in the recipe are: White chocolate and cranberry, Zingy ginger and lemon, Maple syrup pecan, Oats and honey, Cherry and flaked almond and Toffee fudge chunk. I quite fancy trying them with maple syrup and cranberry, in a combination of the flavours they suggest!
Posted by Caroline at 11:30

Mmm I love condensed milk, I could eat it from the tin lol..! These cookies do sound nice, wonder can you use fresh blueberries in them? I always have a ton of those in the fridge :)

What a fab recipe! All my favourite ingredients..choc and bluberries and sweetened condensed milk!

I was totally planning making these cookies this weekend- I'd spied them in sainsburys magazine too and took a fancy to them so thank you for the tips! And I look forward to hearing what else I can use the milk for!

These look really nice, I always get mixed up between evaporated milk and condensed milk so I'll look forward to seeing what else to do with it!

Now I am so up for 101 uses of condensed milk! It really is food of the gods...in a can.
This biscuits look lovely. Dried blueberries are such funny little things, I've used them a few times. Teamed up in a chocolate biscuit though, yes please.

C, these look delicious - over here we used to be able to buy condensed milk in a tube, so you could just pop the cap back on and keep it for another day! I've just found dried blueberries at Harkola - dried wild berries, actually - and have found them madly addictive (which is bad, as they're quite expensive!). :)

Nic - I don't see why you couldn't use fresh blueberries, but they wouldn't last very long.

Brittany - just don't bake them for as long as I did!

Kate - I look forward to seeing how yours turn out!

Sarah - I've got a few more posts planned for the rest of that condensed milk, keep visiting!

Brydie - I think I quite like the dried blueberries - very sweet, but quite blueberry-ish. It won't quite be 101 things to do, but there are a couple more to come!

Celia - yes, you can get condensed milk in tubes here too - I just happened to have a tin. And I'd still need to use a tube up, just not as quickly! It's annoying that the yummiest things seem to be the most expensive sometimes isn't it! Why can't raisins be so delicious?!

Foodycat - I'll look forward to seeing how yours turn out!

Oooh they look just perfect for dunking in my cuppa!

Great idea for coming up with other uses for leftover condensed milk, am always put off by recipes requiring just a small amount of it!