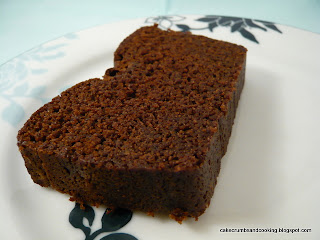 This is the second of my 'things to do with a tin of condensed milk' mini series. The first can be found here - double chocolate blueberry cookies. It's also resurrecting a series I started a very long time ago, 'Marked and Made' - things that have, for one reason or another, been languishing on the 'to bake' list for far too long. I guess it's just my way of acknowledging having finally made them. Interestingly, I don't actually make all that much that I've bookmarked - I seem to be far more influenced by things that I've seen recently and I suppose that if I haven't made something pretty soon after I've seen it, the chances are it'll have to wait far longer than I ever expect.
This brown sugar chocolate cake is a case in point. Dan Lepard first published the recipe for it in November 2005 - five and a half years ago..... even I hadn't realised it had been that long! I think I also avoided making it because there had been an extensive discussion on Dan's message boards about people who had had spectacular failures with this cake. I hate a failure, and often won't give something a go if I think it won't turn out well. But Dan's careful step-by-step photo guide gave me more confidence and when it was successful, people raved about it. I was still a little nervous though. 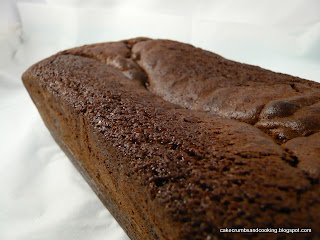 I decided that I would use half and half self raising and plain flour, and a very scant tsp of baking powder. I left the cake for 50 minutes initially, which I think has slightly overcooked it, and I was slightly worried that the top would taste burnt as it looked very dark. As you can see from the picture above, my cake had obviously risen too much in the oven, and had already collapsed back on itself by the time I took it out of the oven. Thankfully, it didn't sink any more while it was cooling, so I ended up with a flat, but not sunken cake. Given the history of the recipe I wasn't expecting peaks or massive rising, so I was a happy bunny indeed! 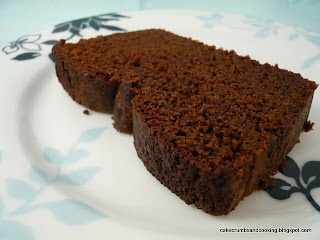 And what made me even happier was the divine taste of this cake. The 'burnt' top I thought I saw, wasn't burnt at all, for which I was very thankful! The first thing to say is that it is extremely delicate, but I'm sure that actually this is part of what makes the cake so delicious. It is a moist, chocolatey, melt in the mouth loaf with a beautiful soft crumb and I wouldn't hesitate to make it again. Next time I think I'll use all plain flour. Suelle at Mainly Baking has also made this recently (which was another prod to my memory that I ought to make it) and wasn't 100% about it, having made a couple of changes but I thought my relatively unchanged version was truly delicious. I think it would be great with vanilla icecream and a chocolate pouring sauce too, but it was fabulous at tea break time. My colleagues were really pleased with it too - I gave it to some colleagues who rarely get my baking these days and they were very happy!!!
Posted by Caroline at 07:30

I'm glad I'm not the only one who, no matter how tasty a recipe sounds, does get a little nervous if other peoples reviews aren't so great! It sounds as though it was very well worth giving this one a go! I too have a whole pile of yellowing cuttings from Dan lepard's weekly recipes in the guardian, thank you for the timely reminder to go through them- perfect job for a grey bank holiday!

This looks really delicious! I love the sound that it is dense. When cakes sink it can be scary, but it's also a signal of a good dense/moist texture :)

I'm pleased this worked out so well for you.

I think my slight misgivings when I made it recently were down to using oil instead of butter. The first time I made it, with butter, I remember really liking it! I'm over-critical anyway, no-one else complained about it! ;)

Kate - It's always reassuring to have a success to refer to when making something for the first time isn't it - I hate a failure!

Brittany - it might look dense, but it's actually really light and quite fragile too.

Suelle - I was happy with the way it turned out. I think you might be right about the oil - I sometimes think muffins taste better with butter rather than oil, and it might be something similar here. I tend to be very over-critical of my recipes, and even if I don't like it (not here, I hasten to add!) everyone else seems to!

Looks rich! Right now it's getting a bit hot here for baking but once a colder days hits this looks like it could be very promising.

Sonia - I wish I lived somewhere that got too hot to bake!