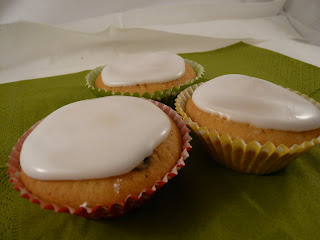 An unassuming title, but a delicious little cake nevertheless. I was talking about cake at work (not an uncommon occurence!) and one of my colleagues mentioned that her grandma used to make raisin buns with icing on the top and she really liked them. The idea seeded in my mind, and I thought that the cupcakes that I've been making recently from the Primrose Bakery recipe book would have just the right texture to hold the raisins in suspension. 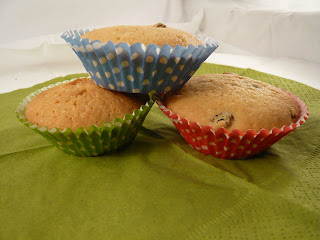 Luckily I was right! You can see the raisins poking out from the top of the cakes, and they were pretty well distributed throughout the cakes. Success! You can find the recipe here. I actually decided that rather than make large cupcakes I wanted to make smaller buns (more like those of my childhood than the size you tend to get now) and so halved the recipe. I found that the half recipe gave me the perfect amount for 12 buns (by this I mean fairy cake size cases rather than muffin size cases). I added about 35g of raisins and chopped them in half to make them smaller and more likely to stay 'afloat' in the mixture. It didn't actually take as long to cut them in half as I had thought, and it meant that they were more evenly distributed, but if you don't want to bother you could just use currants instead. I baked them for around 18-20 minutes at gas 4. I think next time I make them I'll use a ratio of 75% self raising to 25% plain flour and see how they turn out. I'm not sure if it was making them in a smaller size but they seemed just a touch denser than I would have ideally liked. The icing was simply icing sugar mixed to a fairly thick paste with hot water and spread onto the cakes.

I really enjoyed the simplicity of these buns - they aren't rich or heavy but just a straightforwardly enjoyable cake, reminiscent of childhood birthday parties and picnics and similar happy memories. My colleagues enjoyed them too, which is always good!
Posted by Caroline at 22:30

How odd. i just bought that book today. It looks lovely as do your little cakes.

Yumo. I think its time I came to work in your office ;0)

A classic - always delightful. This is the type of cake I grew up with and made me what I am today....i.e. fat!!!!

I want to work in your office too! I love the look of these, C, I'm a bit over tall high cupcakes, and I'm nostalgic for the little flat patty cakes we grew up on, just like these. Thanks.. :)