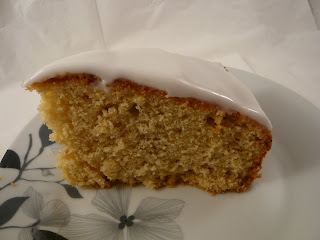 This cake is based on a recipe by Dan Lepard originally published quite some time ago in June 2009. It can be found here. The idea of using oats in a cake was intruiging as I've been using oats regularly in one of my favourite breads. I had to modify the recipe a little and substituted more flour for the ground almonds specified. I used self raising flour rather than plain and omitted the baking powder and since I had lemons rather than oranges available I used the zest of two of those instead. I recall the cake taking longer than 40 minutes to bake, probably nearer 50-60 mins. I also (rather unfortunately) ran out of time to make the syrup for the cake, so all in all I didn't really follow the recipe very closely, which would probably explain why the cake was very nice but not exceptional. 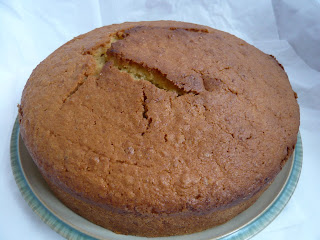 As the title of the post suggests the cake was crumbly and on the dry side, due to the combined efforts of no syrup, possibly slightly overcooking it and dry flour rather than moist almonds, all of which would tend to make the cake moister had I used them. However, I did enjoy the slightly chewy texture that the oats lent to the cake, although it was crumbly it definitely didn't dissolve in the mouth. I think that Dan is quite right in saying that this would be delicious with a tumble of summer berries and a big dollop of creme fraiche or greek yogurt - yum! I think I'll make it again but definitely add the syrup as I feel sure that this would make a big difference to the flavour and texture. I'd probably also use three lemons rather than two and try to bake it for a little less time. 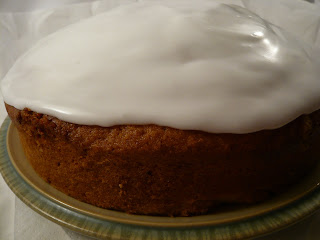 However, I am perhaps overly harsh, it was a delicious cake and gained plenty of compliments from my colleagues. In the end I made up a simple lemon glace icing for it, which complemented the lemon flavour of the cake nicely.

Dan Lepard obviously has a thing about oats! I used them in a cake for the first time when making his Stout and Raisin cake. I thought they worked really well, giving a slightly chewy texture and more substance to the cake. Shame this wasn't as good as you had hoped, but it looks delicious.

Looks pretty delicious to me, and from your deciscription of the way you tweaked it slightly from Dan's original recipe, I think I'd love the taste of your version. I too have used oats in cakes as well as breads, and at first I was a bit iffy about how the texture of the cake would change, but it was a very pleasant surprise, and so I am a bit more liberal when it comes to adding oats. Thanks for sharing this. Listen to your colleagues - I'm sure it tasted wonderful!

I must be joining the oat's-in'cake craze late! Never thought of using them in this way before but I can see that they would create quite a nice texture in a cake. I hope you post when you remake the cake and let us know what difference you found the syrup has on the cake ;0)

I love oats in anything but unfortunately my family don't! Your cake looks great

It looks very nice with the icing over it! And as you say, it would probably make a wonderful base for something like a strawberry shortcake...

Choclette - I really want to try that Stout and Raisin cake - thanks for reminding me!

JD - oats do give a nice texture don't they!

Chele - I'll let you know when I try it with syrup but don't hold your breath, it might be a while.

CC - shame your family don't like oats. They aren't very obvious as a flavour here, but there is a slight chewiness to the texture.

Celia - I think you're right and the raison d'etre of this cake is to be served as part of a dessert with some fresh summer berries and plenty of cream/clotted cream/ice-cream/creme fraiche/yogurt!!!

I'm very intrigued now about oats in a cake too, never really crossed my mind before! Lemon has to be one of my favourites so will have to try...

Have you tried Dan's tapioca fluffy chocolate cake recipe btw? That's another strange ingredient that has adds moisture to the crumb of the cake. I bought a packet of oat milk this week, I was going to try making bread with it and see how it comes out, but maybe it would be good as the liquid in a cake. I can just about envisage tweaking a bread recipe but cake recipes I am a bit scared of. Anyway I would love a bit of your crumbly lemon cake please wih my tea, I love lemon cakes!

Anne - let me know what you think if you try it!

Joanna - I have indeed made that cake, link here: http://cakecrumbsandcooking.blogspot.com/2009/05/moist-chocolate-cake-with-honey-glaze.html
To be honest though, I don't remember eating it - I'll have to make it again and have a generous slice to assess just how moist it is ;-) You'd be welcome to come for a slice of cake, but just give me time to tidy the house, say 6 months.....