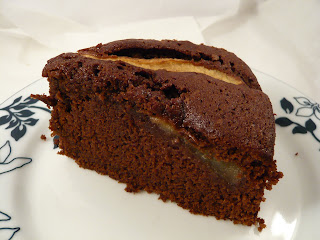 Perhaps not the most attractive photograph, but certainly a delicious cake. I had a desire for a basic chocolate cake, but also wanted to use some of the seasonal fruit around at the moment and pears and chocolate seemed like a good combination. Based on a recipe in 'Mix', a compilation cookbook from the Australian Women's Weekly (a recent payday cookbook purchase....) I had bookmarked this one a while ago to try. It didn't disappoint and I will be making it again.

The recipe is for a plain chocolate cake with a chocolate icing and I decided to peel and thinly slice a large-ish pear and place it on the top of the mixture before baking, in the (rough) shape of spokes of a wheel. I had sort of hoped that the pear would stay on the top, but it largely didn't, sinking mostly without trace into the mixture as it cooked - you can see a piece of sunken pear in the picture at the top. One piece did stay up though, and with hindsight it's perhaps best that most of the pear sank because the piece remaining started to discolour quite quickly - a cake best eaten on the day of making.

The cake has quite a high proportion of sugar, but doesn't taste too sweet, instead it seems to have a moist dense but not heavy crumb, sort of tending towards brownie. Delicious in other words! The pear worked well with the chocolate, and there's something about the grainy texture of cooked pear that I really like - it's a similar texture to tinned pear, which I also like!

Method
- Preheat the oven to 180C/Gas 4. Grease and line a deep 20cm/8" round cake tin and line with baking parchment.
- Beat butter, extract and sugar together until well combined. Add eggs, sifted flour, semolina and cocoa and the water and mix on a low speed until combined. Increase the speed of your mixer and beat about 3 minutes until the mixture is smooth and paler in colour.
- Spread mixture into cake tin. Arrange the pear around the cake in a spoke design. Bake for about 1 hour, although mine took about 1 hour 10-15 mins.
- Remove from oven and cool on wire rack.

This would make a really delicious warm dessert with some vanilla icecream, but was equally as good cold with a cup of tea.
Posted by Caroline at 15:00

That looks amazing! I love the combination of chocolate cake and pear and great minds think alike. I am about to start work on a pear cake, although no chocolate in sight. I am going to bookmark this one.

Chocolate and pear is my absolute favourite combination - this cake looks so rich and yummy. I'm drooling!
I love it when the pear sinks into the cake a little as it makes the sponge even juicier

I love how tall it looks. Chocolate and pear is a great combo and one I don;t use nearly enough. Looks delicious.

this looks delicious! A great combination I have never tried before and will give a go to it!