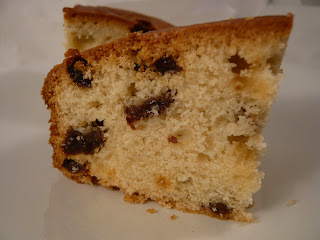 Oh, this is just such a delicious cake that even though I've already posted about it once here, I want to sing its praises all over again. Last time I made it, I can't say the experience was a total success, but the flavour was so amazing that I needed to attempt it again and seeing the last piece in the freezer from last year (what can I say - my freezer is full enough that I could lose anything in there!!!) was all the prompt I needed to dig out the recipe.

The recipe was originally from the Caked Crusader, and I haven't really made any changes to the proportions of the cake, just to the overall size. As mentioned last time, the cake took far longer to cook than I expected, resulting in an overcooked edge. To recify this I decided to keep the tin size the same but to make 2/3 of the recipe. This worked admirably, and the cake cooked in around an hour at the same temperature. Perfect. I was really pleased with the texture of the crumb and the edge wasn't too thick or dark this time. I served it au naturel, but if you want to gild the lily, I suggest you hop over to the Caked Crusaders blog for her custard buttercream recipe to serve with it, which sounds rather divine!

I can't explain the flavour of this cake well enough to do it justice, but it's sweet yet not too sweet and the raisins and buttermilk combine beautifully - the sum is so much greater than the parts and I urge you to try it even if you're not the world's greatest raisin fan. 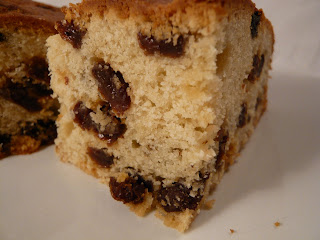 I used the following quantities this time round, but followed the same method as last time, found on the Caked Crusader's blog.

This looks DELICIOUS, you have inspired me to make this today, I'm off out to buy some buy some buttermilk! Lucie x

Glad you enjoyed it - I love this sort of cake, so simple but delicious.

That looks like a nice piece of cake to go with coffee or tea.