A different Parkin for Bonfire night 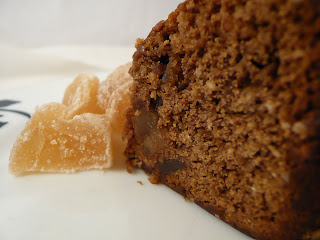 Yep, it's that time of year again, and although I'm a couple of days late, I'm going to post this anyway. I wrote about making Parkin last year, so you can read that post for some more of my thoughts on this rather delicious treat. This year, I decided to try a different recipe, just for a change, and to see if I could lose the rather burnt looking top from the other recipe (I'll just reiterate that although it always looks burnt, it never seems to taste it). I debated making the other recipe but only doing 2/3 so that it cooked more quickly, but was browsing through the forums over on Dan Lepard's website (bet you never saw that one coming did you!) and found his recipe for 100 year old parkin. Well, it'd be 102 year old parkin now, but what's two years among friends?!?

Anyway, the recipe is here and as I stuck to it pretty closely I'll not reproduce it, but will leave you to find it yourselves! The only changes I made were to use salted butter and omit the salt, use 100ml milk (rather than 50ml, a change suggested by Dan later in the thread) and to substitute crystallised stem ginger for the mixed peel. I quite like mixed peel if it's the stuff you cut up yourself, but I wanted to go with the overall gingeriness (is that a word?) of the parkin.

I was really pleased with how this turned out - it's delicious. Nubbly and oaty and gingery and biting into a piece of crystallised stem ginger is particularly good - I might add more next time. You really do want to leave this to mature after you've made it. I left mine wrapped up for 5 days before cutting it, and it continued to improve for a few days after that, getting stickier on top (and then it was all gone....). I hate to say it, but I think J's recipe from the Cordon Bleu cookery course may have been ousted in favour of this one. Thanks Dan. 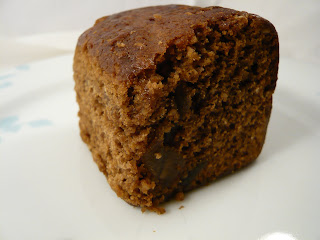 And you can see that the top isn't burnt either - woo-hoo!!! Success all round. Colleagues were really pleased when this arrived at work - ooooh, Parkin!
Posted by Caroline at 21:00

I love Parkin! I could just eat some right now...

I've never made Parkin, although I often make gingerbread, and this is the first time I've noticed that not all parkin recipes use egg. Weird that I've never noticed before!

I've never made parkin, just gingerbread. This looks exactly how I imagine it should be - dark, dense and squidgy and packing loads of flavour. Yum

I love parkin. I had planned on baking some myself for the first time this bonfire night but just didn't find the time. Yours looks great

This looks great, and I like the bits of ginger in it - I bet it is better than last year's and I'm going to bake some and see!!! J

yum- this looks delicious - ginger, oats and nubbly are words I love to hear when talking cake