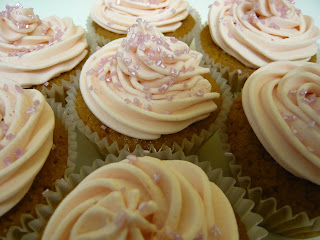 Welcome to this month's Sweet and Simple Bake. For me, buttercream iced cupcakes are the essense of sweetness and simplicity - a light, fluffy vanilla cupcake topped with a decadent swirl of light-as-a-feather buttercream is perfection. 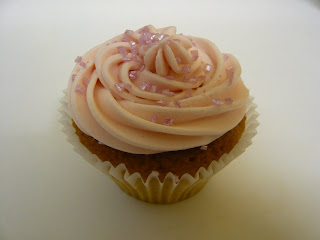 I have a small confession to make, but I'm sure Rosie and Maria will forgive me! I looked at the recipe when it was first mentioned at the beginning of last month and thought yum, cupcakes. I then promptly forgot all about it for a few weeks and finally got round to making these a week ago or so. I didn't look at the blog again and so just used the cupcake recipe that lives in my head, which is 4oz (or about 115g) each of butter, sugar and self-raising flour and two eggs. Plus a tsp of baking powder and a tsp of vanilla extract. Now, this is the same recipe that Rosie and Maria give on the recipe blog here, but scaled down. Perhaps that's why my cupcakes aren't exactly overflowing their cases, although I actually think they're a pretty good size for a quick midmorning pick-me-up! So if you want to follow their recipe (which I'm sure will work perfectly), please do. For the recipe I used, click here! 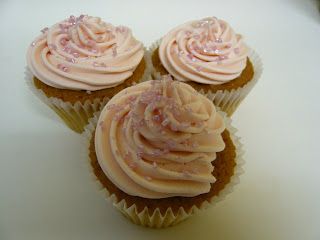 I decided that I wanted to have some fun decorating my cupcakes, and chose red food colouring to give pink buttercream, which I piped on using one of the nozzles I bought a while back. I love piping buttercream, it's just such good fun. Sadly, I underestimated how much butter I needed and used 90g butter plus 180g icing sugar. I think for 12 cupcakes piled gloriously high with buttercream (like here) I would have needed about 120g butter and 240g icing sugar. 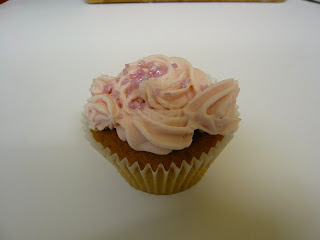 These disappeared as if by magic when I took them into work, even the one above, which was the last lonely cupcake to be iced and I really was running out of icing! However, I got no complaints about it, and plenty of praise so it does seem to show that the simple things in life are the best sometimes!
Posted by Caroline at 09:00

They look beautiful with the piped pink buttercream!! Your co-workers are a lucky bunch ;o)

Thanks for taking part and hope you will join us in our next bake.

These cupcakes look fabulous. I love the soft pink buttercream with the sprinkles.
Btw thank you for visiting my food blog and leaving a comment.

It' a sure thing we will forgive you *giggle* Your cupcakes are so very beautiful and I adore your pink buttercream and love the piping work!!

Thanks for taking part and hope you will join us in our next bake.

cup cakes look perfect... love the piping on the cakes... I piped my cup cakes too, but not as perfect as yours...

Ciao ! I love your colour combination !

Love the color - the pink is pale and lovely. And looks perfect for a princess with the sprinkles.

I think a vanilla cupcake is a thing of beauty and, faced with an array of cupcakes, would always be my choice.
You've done a great job and I love the sprinkles!