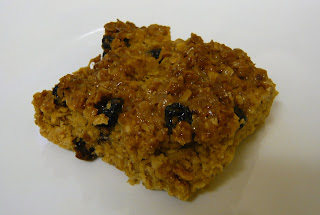 I suppose this is really more of a note to myself than anything particularly original. When I made these chocolate flapjacks, I was really pleased with their texture - slightly thicker and more 'oaty' than my usual ones, and given that they went down so well at work, I was inspired to try different variations. If I don't post about this one soon, I'll forget what I added to them, which would be a real pity because they were really good! 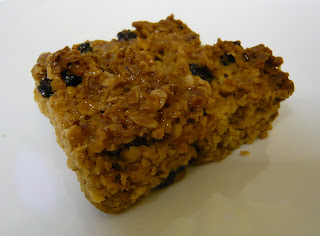 So no new recipe I'm afraid, I used the same recipe as here, but omitted the chocolate, replacing it with 100g raisins and the finely grated zest of one lemon. I know that J feels flapjacks should be 'pure' and not have other things added to them, but I'm going to disagree with her! These were yummy and the lemony flavour was great. It cut the richness a little, and the raisins were good - not too prominent, but added a little interest to the flapjack. I was worried that they'd burn during the cooking, but they didn't. A few on the top caught a little, but not in an acrid burnt way, just in a chewy, tasty way. And if you really don't like those ones, you could easily pick them off! I think that next time, I might add the zest of another lemon, because I really liked the flavour it gave, but it was quite subtle this time. 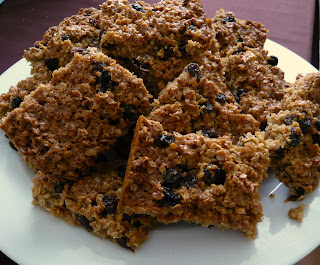 These went down just as well at work as the last batch. I think I'm on to a winner. Quick and easy to make, and not too expensive either!
Posted by Caroline at 18:00

These look like a yummy snack! Interesting to learn that flapjacks can refer to things other than pancakes! =)

Great flapjacks. It's good to add other ingredients to the basic recipe and looks as though it worked well.

I love flapjacks, they are quick and easy to make. This version looks and sounds great!

Those flapjacks are really yummy!