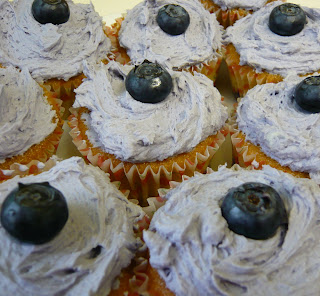 Well, I promised last time that there would be some non-chocolate posts coming so here we are. Can't get much healthier than the 'superfood' that is blueberries ;-)

Truth be told though - I had some rather lovely blueberries that I wanted to bake with, and the vanilla cupcake recipe from the Hummingbird Bakery Cookbook was firmly planted in my mind as the next recipe to try. So I adapted. I made the recipe as stated in the book, but added 4 blueberries to the base of each case (inspired, it has to be said by the strawberry cheesecake cupcakes in the book) and then when I made the vanilla frosting, I coloured it purple and topped with the remaining 12 blueberries - I had just the perfect number in the punnet (allowing for the few that made it to my mouth during the process....).

Method
- Preheat oven to 170C/Gas 3. Line a 12 hole muffin tin with paper cases.
- Reserve 12 nice big blueberries and divide the remaining ones between the 12 cases.
- Put the flour, sugar, baking powder, salt and butter in a large bowl and beat on a slow speed with an electric hand mixer (or put into a stand mixer - oh for a stand mixer!!!) until well combined and a sandy consistency. This was messy and got all over the work top. Ah well.
- Whisk the egg, milk and vanilla extract together in a jug and add half to the dry mixture. Beat slowly to combine and then more quickly to beat out any lumps.
- Add the remaining liquid mixture and beat slowly to combine. Do not overmix.
- Transfer (I found semi-pouring/semi-spooning the best way to go as the mixture is quite slack) the mixture into the cake cases until 2/3 full and bake for 20-25 minutes in the preheated oven until they spring back to the touch. A skewer inserted should come out clean (provided you don't stab a blueberry!)
- Remove from oven and allow to cool on a wire rack before frosting.


- For the frosting, beat the butter and sugar together until well combined. The mixture will be crumbly.
- Add the milk and beat to combine. The mixture will come together into a big lump. Add the colouring cautiously, beating until you get the desired colour. Keep beating for a few minutes, you will see it get lighter in colour and texture.
- Spoon or pipe onto the cupcakes.


Finally, top each of the cupcakes with one of the reserved blueberries. Sit back and admire your delightful creations. 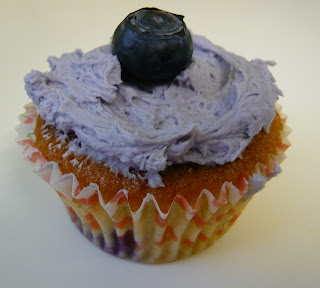 As with the chocolate version, these cupcakes were delightfully light and moist, and the blueberries at the bottom provided a luscious gooey contrast to the cake. These went down an absolute storm at work - I think they were the most rapidly disappearing cakes I've ever taken in!!!

Make them, you won't regret it!

These sound great and look so pretty. Its interesting how they use milk instead of so mcuh butter in the mix.

Your cupcakes look wonderful!! Just love your own take with the blueberries in this recipe.

These cupcakes look wonderful - can't wait to try them.

I love your adaptation on these cupcakes, so cute!

I love the purple look of these - I often feel a little let down by blueberry cupcakes because they aren't colourful enough but these look fab!

Thank you! I was really pleased with the way they looked - the purple food colouring worked really well - some of the colours I've tried haven't taken very well.

Katie - it was the amount of milk in the recipe that had me intruiged, and they were definitely the lightest cupcakes I've ever made.

I really like the flavor combo going on here! That butterscotch banana cake sounds heavenly too! So unique.

all in one printer said...

i love blueberry cakes and cupcakes..

thanks for the recipe.. looks really good..