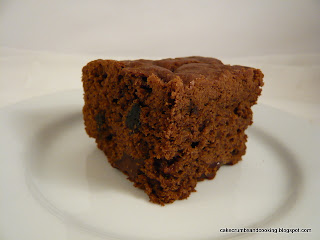 Yep, another brown square.... tasty though

I knew I wanted chocolate cake and nothing too fancy but didn't really know what else beyond that. As I hunted in the cupboards and fridge for inspiration, a carton of soured cream that needed to be used (having been bought with no particular recipe in mind) and some dried fruit caught my attention. The dried fruit in question was some that I had bought reduced-to-clear a while ago. It's dried fruit though - I'm not sure why they were so desperate to sell it off but they clearly were, it had been reduced from £1.50 to 29p with about 6 months still until the best before date. I can only think the manufacturers wanted to launch new packaging. Anyway, a bargain is a bargain. Unless you don't use it so I thought I'd better incorporate my dried blueberries into a cake. 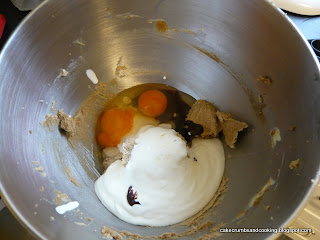 
Method
- Preheat the oven to 180C/Gas 4. Grease and line an 8" square tin with baking parchment.
- Cream the butter and sugar until light and fluffy - this might take 5 minutes or so even with an electric mixer.
- Add the vanilla, egg, flour, cocoa powder and soured cream and beat well until combined.
- Stir in the chopped chocolate and dried fruit and transfer to the baking tin (this is a stiff mixture - don't worry)
- Bake for 40-45 minutes until risen and a cake tester comes out clean. 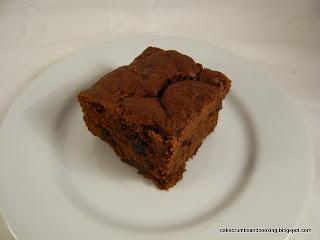 I had been worried that this cake would be rather dry and crumbly, but actually I needn't have worried at all. It was moist and tasty and the combination of dried blueberries, dried cherries and chopped chocolate meant that each bite had an extra, interesting taste and texture.
Posted by Caroline at 22:40

Love the idea of chocolate cake with blueberries AND cherries . Delicious!

Yum. I think I'd add some chopped nuts too and turn it into a fruit & nut extravaganza! I love this sort of cake

That cake sounds really tasty with blueberries and cherries - both delicious as dried fruit. Soured cream gives a lovely flavour to chocolate cakes too, so I think you were on to a winner here.

I don't think I dare tell anyone how long some of my dried fruit has been hanging around. But what a fantastic bargain you found, blueberries are so expensive.