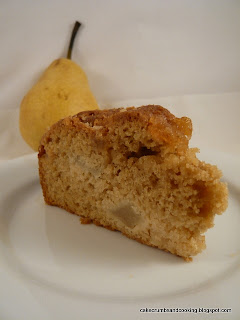 I'm never quite sure about pears. I do really like them, but it depends on my mood as to whether I want a lusciously ripe and dripping Williams pear or a hard crunchy Conference, preferably cold from the fridge. So I bought pears and then decided that I didn't really want them at all. And we all know that pears usually go from rock-hard to soft-and-squishy in the blink of an eye so I decided that I ought to use these ones up. One found a home in this rather good cake.


Pear and ginger are a good combination of flavours and I love the fudgy toffee-ish depth of flavour that light muscovado sugar brings. Pear has a fairly subtle flavour sometimes and I didn't want to overwhelm it in the actual cake, so I left my ginger just for the top of the cake rather than the batter itself. 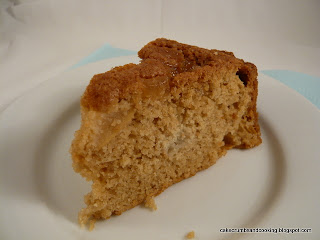 - Preheat the oven to 180C/Gas 4. Grease and base line a 7"/18cm round cake tin.
- Cream the butter and sugar until light and fluffy.
- Add the vanilla, eggs and flour and beat until combined. The mixture will be very stiff.
- Add the chopped pear (my pieces were about 1cm cubes, or slightly smaller) and mix to combine.
- Spoon into the cake tin and level as best you can (again, the mixture is stiff).
- Scatter over the finely chopped ginger.
- Bake for 35-45 minutes (I can't quite remember how long this took now) until risen and golden and a cake tester comes out clean.
- Allow to cool on a wire rack 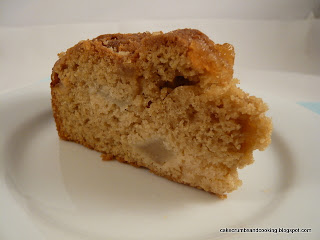 This was really successful. The cake was soft and moist and because the pear was still relatively underripe when I used it, it hadn't turned to mush whilst baking and retained a bite in the cake, making for a nice contrast of taste and texture. The ginger on the top worked well too, providing a crunch and a little hit of heat. A success.
Posted by Caroline at 23:15

Pear and ginger is a lovely combination. Like that it was chunks of ginger, rather than spice. I personally like crisp and crunchy pears for eating.

Pear and ginger is so lovely! I know what you mean about pears too. I like them but I hardly ever buy them in case I miss the perfect point to eat them.

Great flavour combination. Like others, I'd eat more pears if it was possible to catch them at the right point. I ought to cook with them more, but hubs doesn't really like them.

Lovely simple cake with a winning combination of flavours - I also love recipes that use just one of a fruit, as it's far more likely that I will have one sad looking pear or apple or banana than a whole bowl of them!

I love pears but really don't use them enough in baking, so this has definitely inspired me! Pairing them with toffee sounds absolutely delicious.

Oh my that looks good - I love any baking with pears. What a homely looking cake - impossible to stop at one slice, I bet!