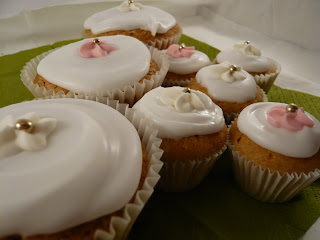 I can't believe I haven't updated for so long - I really am still alive and have actually been baking quite a lot recently, but being busy at work has put paid to having any time to blog about any of it! I now have an enormous backlog of things to blog, so decided to make a start with these.
I mentioned a while ago that I had bought the Primrose Bakery Cupcake recipe book (at a bargain price) and I'm so glad that I did - I've made lots out of it (possibly more than any other book I own, certainly for the number of recipes in it) and there are lots more bookmarked to make. I don't know what made me decide on Earl Grey as the next flavour to make after the Lemon Cupcakes - I don't drink tea as I don't really like it! I had, however, bought a mixed packet of tea bags for the odd occasion when a desire to make teabread strikes, and in the mix there were earl grey teabags. This recipe seemed as good a time as any to use them up and see what tea in a cupcake is like. 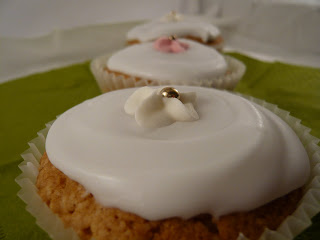 The recipe is very similar to the vanilla cupcake recipe here, the introduction of the earl grey tea flavour is via steeping tea bags in warm milk and allowing to cool before adding to the cake mixture. I found with the lemon cupcakes that they were quite large and so decided to see if I could get more out of the mixture by making mini cupcakes too, which was a successful tactic - I had a dozen full sized and a dozen mini cupcakes and none looked as though I had skimped on the batter.
Good? Yep! I was really pleased with these. The tea flavour was really subtle and as I had expected this to be the case I went with an unflavoured glace icing so as not to interfere with the flavour. Good decision as the icing added the necessary sweetness without masking the subtle flavour. I think if you didn't know what the flavour was it would be hard to guess, but there was just a hint of perfumed aroma more than anything I suppose. Hard to describe but delicious to eat. 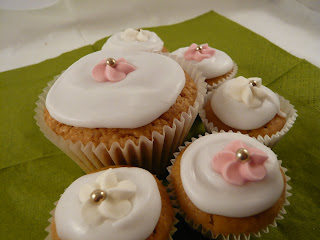 As an aside, I also made a coffee layer cake for a colleague's (significant) birthday recently from the book. It differed slightly from my previous coffee cakes because the recipe says that at the end, just before spooning the mixture into the prepared tins, you marble through the extremely strong coffee mixture, creating a beautiful marbled cake. When the cake is cooked and cool it is drenched in a coffee syrup, making it incredibly moist before being sandwiched and topped with a coffee buttercream icing. I decorated it with chocolate coffee beans (very popular at work!). I wish I'd managed to get a photo of it because it looked incredibly light and moist and very pretty with the marbling, but I was too embarrassed to photograph it at work... The birthday girl was delighted though, and many compliments were received from the assembled crowd at work when it and the other presents were given. Definitely a make again recipe and I might borrow the idea of the syrup for other cakes too.
Posted by Caroline at 18:00

These are very elegant, C. Just right for a genteel tea party!

The coffee cake sounds good too - I insist you make it again and get a photo this time! ;)

I have that book and wondered what these cup cakes would be like. Glad to get a review from you :) They look lovely

Suelle - The little cakes in particular would be good at a tea party! I really wish I had managed to get a picture of the coffee cake. Not sure when it'll be made again, I'm not much of a coffee fan!

Rhyleysgranny - it's a fabulous book isn't it! I'm gradually making (well, baking really!) my way through it. Do give these a try - the tea flavour is subtle though, so bear that in mind if you're expecting a massive hit of flavour!

They look so pretty!

C these look amazing! I love the smell of earl grey, but I don't like the taste, so "gently perfumed" sounds about right to me.

And I agree with Suelle - make the coffee cake again and photograph it please!

Foodycat - I bet you'd like these cupcakes then. There was definitely more of an aroma than flavour, which was nice! If you can persuade me to like coffee, I might make the cake again - looking like a slim chance ;-)

These are great cupcakes. I can almost taste them as i type ;0)

C, they look so refined - Suelle is right, the word is genteel. I love the pastel colours. I've never tried tea in baked things, thanks for the idea...

I'm not a tea fan either, but I do seem to have become a fan of it in chocolate and cakes. Haven't made these yet, but they are on my list. Shame you didn't manage to get a photo of the cake - sounds amazing. Pouring syrup over cakes seems to be quite common, but I've only done it so far for lemon drizzle types.