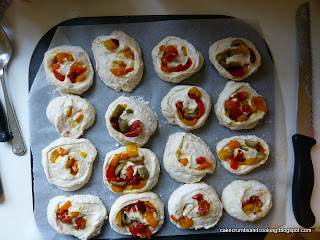 I have been a little busy of late. This is a bit of an understatement. In the past week my kitchen has been replaced - massive woo-hoo! The old kitchen was plain nasty and I have always been too embarrassed to share any pictures of it with anybody out there, but now that it has gone for good I feel I can admit to the mess I used to work in! Anyone who knows me knows that I am messy beyond belief - if there is a flat surface available I will put something onto it. And then something on top of that. This was massively compounded by my kitchen having far too little storage space, and even then, some of it was not usable - drawers that fall off their runners when you pull them out?!? So it is no surprise that my kitchen is was messy too. I vow to try harder now! 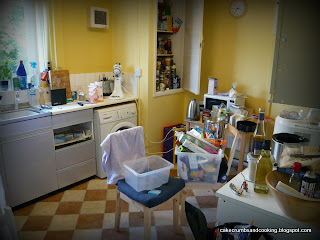 With having no kitchen for a week, and therefore no easy means of food preparation meals have not been inspiring of late at all. However, I wanted to make lunch preparation as easy and painless as possible so I decided that interesting bread rolls that didn't need anything more adding to them were the way to go. There is a glut of peppers available at the moment and so I took my bread down the Mediterranean route - roasted peppers, tomatoes and olives and an olive oil based dough too. 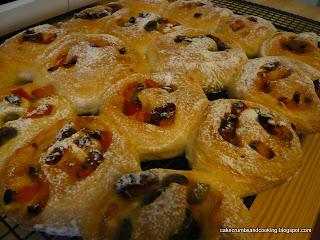 Why scrolls? Well, just because they look pretty!

- Before starting the dough I firstly started to roast the peppers and tomatoes. Carry on until they are soft then leave to cool before peeling off the pepper skins and chopping into pieces.
- For the bread dough, put the flour, olive oil, water, yeast and salt into a large bowl and bring together as a dough. It will be very soft and sticky. Leave it for a while (10-15 minutes)
- Grease the work surface well and knead the dough briefly. Leave 10-15 minutes and repeat the kneading process. Oil is your friend here - it will stop the dough sticking to your hands and work top and make it possible to work.
- Leave to rise until doubled (I left mine on top of the warm oven so it didn't take that long).
- Pat out to a rectangle (my dough was quite resistant, it would far rather have stayed as a ball thank you very much...) and scatter over the roasted chopped pepper and roasted cherry tomatoes leaving a gap along one side - see photo below. I also scattered over olives too - but forgot to photograph that step - you can see the olives in the slices though.
- Roll into long snake and then chop across the snake to give your scrolls.
- Allow these to proove until risen.
- Whilst prooving, preheat the oven to Gas 6/200C.
- Bake for about 35 minutes or so at Gas 6.
- Allow to cool on a wire rack. 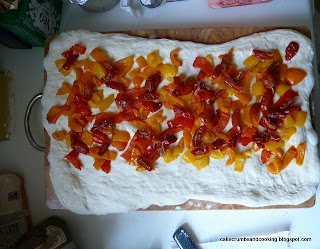 These were great - soft but resilient dough generously flecked with roasted vegetables and olives made a very satisfying lunch, and they would be great with a handful of feta cheese too. It was very easy to just grab what I needed from the freezer each morning - no hassle! They would also be perfect with soup. These were the very last thing I baked in my old oven. I'll perhaps share some photos of the new one - maybe even when it's in action... (I know that seems silly, but I'm very impressed by my new oven with its glass door and internal light! Ah modern technology!) 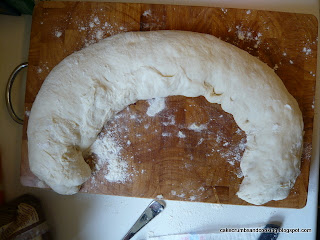 I have to apologise for the poor quality of the photographs - my usual method of obtaining better lit photographs was unavailable and this is the best I could do. Normal service will hopefully be resumed shortly. 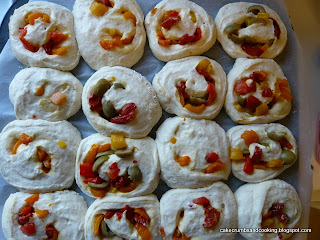 Ready for baking - puffed up

So I now have a challenge - a new oven - fan - so the next things you see (apart from those waiting in the archives) may be crispy burnt offerings as I attempt to get to grips with a foreign beast. But at least I'll be able to see when my cakes are burning..... (this is the first time I've had an oven with a glass rather than solid door!) 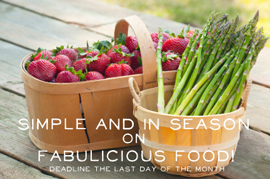 As peppers and tomatoes are in season I am sending these to Ren at Fabulicious Food for Simple and In Season.

I am also sending them to Javelin Warriors 'Made with Love Mondays'.

these look like a great idea for lunches - just the sort of thing I would love in my freezer.

love seeing your old kitchen - mine is like that - it made me laugh to see the chairs with stuff on them as we do that too when it gets too chaotic during a baking spree.

I hope we will see your new kitchen. I also am curious about your comment that you didn't take photos as you normall do - what is your usual way of photographing food?

I can't believe you managed to make these despite the chaos of renovations! I would love a new kitchen - but in the meantime I'll settle for pics of yours... Please?!

I love these and as to your old kitchen, I was just thinking how sunny and inviting it was :)

Oh and reduce your oven temps by 20 degrees for your fan oven :)

So where's your new kitchen pictures?

I usually work with just a 60 cm square of work surface - so if I have anything complicated to do I have to clear half the kitchen into the hall or dining room. We bought a high butcher's block table to help ease the problem, but that was covered in clutter within a few days too!

Those scrolls look gorgeous and so colourful. Things always have to get crazy messy before they get tidied again. The results will be worth it!

Can't wait to see your new kitchen!! How exciting! And your scrolls look perfect - I bake a dozen every fortnight (olive and cheese) for my son's lunches, and they defrost perfectly out of the freezer, as you say..

These do look very pretty and they sound really tasty. I hope the new kitchen is everything you wanted it to be. I know a number of people who really don't like fan ovens but I like mine a lot (although I can switch the fan off if I want). It can take a little while to get used to, though.

If you think you're messy you should come and see my kitchen! Look forward to seeing your new kitchen and hopefully there won't be too many burnt offerings :) This looks delicious and yes the scrolls look very pretty!

Johanna - glad I'm not the only one to use chairs as extra work surface! Most of the pics here are ok actually. I usually use a light box, but couldn't so the picture of the final rolls is far too dark!

Chele - they'd be great for picnics, I hadn't thought of that! New kitchen pics coming...

Lucy - I will share some soon. I can't quite believe I made them either - it was in the middle of emptying everything out!

Foodycat - I intend to enjoy it! A real grown up kitchen!

Jac - the colour was fine, it was just the lack of units, drawers falling off and general horribleness that I hated! I'll remember your tip for the oven too. Luckily I can turn the fan off if I want.

Suelle - Pics are coming! I understand clearing everything out - that's what I had to do too - my worksurface is the bit you can see, probably longer than 60cm, but narrow. I think you're right - it's because we're interested in food!

Katie - I'm sure the results will be worth it, but I'm not good at tidying up!

Celia - I thought of you saying that you baked batches of filled rolls for big boy when I decided to make these - thank you for the inspiration!

Phil - yes, luckily I can choose non-fan too. It's still going to be interesting though.

Ros - I think we can probably compete well on the messiness front!

Congrats on the new kitchen and I can't wait to see photos! A few years back, we gutted and redid our kitchen (before we sold the house) and it really motivated me to keep getting back into the kitchen to use all the new cabinets, countertops and appliances ;)

Thanks so much for sharing these scrolls with Made with Love Mondays - I love the homemade dough and use of olives. I think olives are underused and love discovering new uses for them...

I have seen your rolls on Javelin's site. They look amazing and they must taste delicious. Well done!

Ahh, now I know what's happened to your kitchen. Sounds very exciting and at the very least you do have a nice big kitchen. Do we get to see a picture of the new one.

Your rolls look absolutely scrummy and what a fab idea for a work lunch.

I saw these tasty rolls over at Made with Luv Mondays...and had to stop by to see them. They look amazing and I love the scroll concept with a savory filling. I'd love it if you'd stop by and add these to the BYOB - Bake Your Own Bread bread basket this month! (http://www.girlichef.com/2012/08/byob-bakeyourownbread-august-12.html)

CC - I'm definitely on an olive jag at the moment. Loving them. It comes and goes though!

JW - yes, having a new kitchen is lovely! Olives are one of my loves at the moment, but I'm not sure how long it'll last!

Alida - thank you. I'm glad you found my blog, and thank you for leaving a comment.

Choclette - it definitely made making my lunch so much easier. I'll have to try again with some different flavours too.

Heather - thanks for stopping by. I'll have to try and enter your linky another time too!