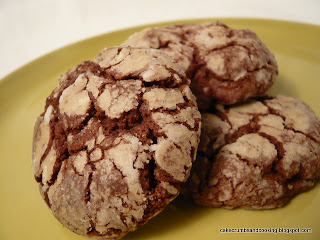 When I was contemplating what I could bake to celebrate Chocolate Week, I thought that really, baking seven cakes was a bit much, and I'd be better to break it up a bit with some biscuits! I've wanted to make chocolate crackles for ages now, I just love the way they look, and always wondered if I'd be able to get as good a result as those printed in the books.
I've actually got a couple of books with these little biscuits in them - Easy Baking (by Linda Collister) and the Great British Bake Off second series book, which also contains them (also by Linda Collister) but with slightly different proportions in the recipe, it must be a relatively forgiving recipe. I decided to follow the recipe in the GBBO book. I'm really enjoying using this book, and fully recommend it! 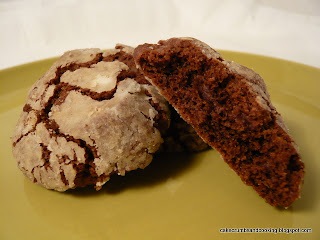 - Melt the chocolate, either over hot water, or in the microwave if you prefer (I didn't).
- Stir in the butter and leave to melt for a bit. When completely melted, add the sugar, stir in and leave a couple of minutes to cool.
- Beat the egg and vanilla (in a large bowl) just to combine then add the chocolate/butter/sugar mixture to this.
- Sift the flour and bicarb onto the wet mixture (this is why I used a big bowl) and mix well to combine. The mixture will be pretty wet, and you're not going to fancy making biscuits out of it, but don't panic! Cover with clingfilm and allow to chill for at least one hour (I ended up leaving mine much longer - about half a day!)
********************

- Preheat the oven to 200C/Gas 6. Line a baking sheet with parchment paper. I only baked one tray at a time.
- Divide the dough into 30 equal pieces (mine weren't so equal, and I got 32 eventually) and roll into balls.
- Just before baking, roll the balls in the icing sugar. I found that if I did them in advance the icing sugar dissolved, so do them just before you bake them.
- Bake for 10-12 minutes (12 minutes will give a crisper biscuit and is what I went for).
- Remove from the oven and after a minute on the baking tray, move to wire racks to allow them to cool completely.
Notes
- My biscuits didn't really spread that much.
- The first batch I left as balls, the second and third I helped along a bit by squashing them gently, just a little. I think this helped and would do it again.
- Don't be tempted to over-bake. I left the first batch in for 15 minutes and the icing sugar started to catch and burn. Boo!
- I also reduced the oven temperature just a little to about Gas 5 1/2 for the second and third batches. 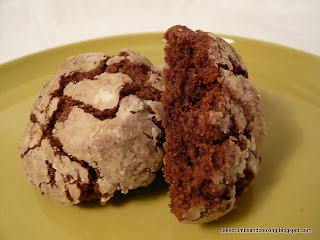 These were really good. The outsides were really crispy from the icing sugar crust, and very sweet and then the inside was still nice and soft, but also a little crumbly. I had thought they would be somehow more chocolatey, but they were delicious as they were, especially with a cup of tea. And I'm pleased to say that they came out looking every bit as good as the photograph in the book - always a sign of a good recipe, when your results look like the authors results!
Stay tuned for more Chocolate Week goodies.....
﻿
﻿ 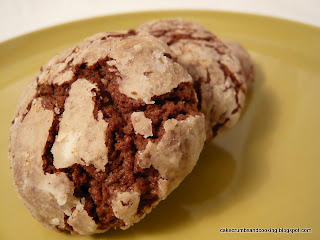 They look very good. I'm loving your descriptive writing to go along with the post. Sometimes it's nice to know how each batch comes out so you can adjust as you go... always learning. Anyway, looks like a great recipe.

This is NOT what I was expecting to see! In Australia a chocolate crackle is a sort of rice crispy cake - cocoa, rice crispies and copha, and I was wondering where you found copha!

These look much better.

These look very good, C! You are really excelling at baking for chocolate week! Who is eating it all? ;)

The recipe I have for chocolate crackles has completely different proportions of ingredients to the one you used. I've only made it once, but I seem to remember the inside was almost as dense and moist as a truffle or good brownie - if you want to try something more chocolatey I'm happy to write it out and email you!

Dom - thanks! I write descriptively so that I know exactly what I thought of something if I come to repeat it, any adjustments I made etc. They were good!

Foodycat - yes, that's what I found when I googled chocolate crackles, and was most surprised but I don't suppose I should have been. I think I'd call what you were thinking of chocolate crispie cakes and I usually makes them with just melted choc and Rice Krispies. I prefer these biscuits too!

Suelle - my colleagues are very happy at the moment :-) You're very kind, offering to write out the recipe, but I've so many things on the 'to bake' list that I probably wouldn't get round to them and don't want to waste your time. Thank you though.

I've never heard of Chocolate Crackles C (but now very glad I have) - do you know where they come from originally? Looking forward to reading your other chocolate week recipes!

These look lovely, they always remind me of christmas! x

I have seen a different version of these with peanut butter in them, I made them a while ago and Brian was not impressed by the peanut butter side of things so I said I would try and figure out a straight chocolate version and here they are ! Lovely! I will definitely give them a go. I found that the icing sugar disappears after a day, so one has, sadly, to eat them very quickly!

You have been busy this week, I can't keep up, it all looks incredibly delicious and I love your write ups too, they are bouncing along with enthusiasm :)

I love the look of they, they just look so rustic and inviting. I've been meaning to try baking these for months, but never got round to it. Thanks for reminding me. Yum!

I've used this recipe a few times and have always been impressed, they're gorgeous!

I too have made this recipe a couple of times, they never fail to put a smile on my face.

I was very tempted to bake these when I saw them in the book, but the buns won out that time. I don't think I need any further convincing, but if I did, you've done it :)

I have a similar recipe - not sure where I got it - that always seems very chocolatey to me - though yours look chocolatey!