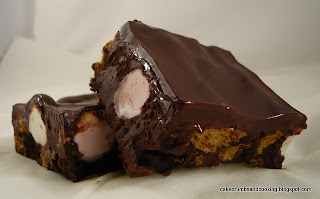 I have been meaning to make Rocky Road for years and years now, and like so many things have only just got round to it. I don't think I've ever even eaten Rocky Road before, it just seems like a jumble of random things melted together and set, but actually, it's pretty tasty! I should really have known that I was going to like it because in essence, it's very similar to these Chocolate Fruit and Nut Cases - a Delia Smith recipe that I've made countless times and enjoy very much indeed.


There are certainly plenty of recipes out there for Rocky Road, it appears to have increased in popularity over recent years. I decided that I would adapt a recipe from a recipe card I received as part of a set called 'The Food Files'. There are quite a few interesting looking recipes in this collection, which is comprised of recipes from a number of famous faces of the celebrity/cooking world (Rose Elliot, Fay Ripley, Richard Corrigan) and a few from food companies (Innocent, Gu, Hummingbird Bakery) and span a range of sweet and savoury cooking. It's not the kind of thing I'd choose to buy, but I ordered some (ahem..) books from The Book People a while ago and they had an offer whereby if you bought two cookery titles you were sent a set of recipe cards free of charge. 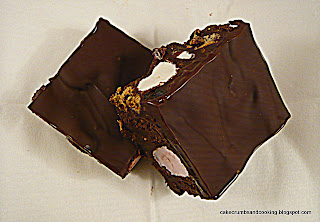 Anyway, enough about where the recipe came from and more about the food. I adapted the recipe slightly to allow for the ingredients I had in my house and my tastes so here I give you

- Grease and line an 8"/20cm square baking tin.
- Melt 300g of the dark chocolate and all of the milk chocolate with the butter and golden syrup. The recipe method was to melt the butter and syrup and pour it over the chocolate, stirring until it melted, but this really doesn't work as there is so much chocolate. I did as I was told, but then ended up microwaving it in short blasts until the chocolate had actually melted. I'll leave it up to you how you go about melting it. In a pan over hot water would work too.
- Add the broken biscuits, marshmallows and raisins to the melted chocolate and mix well so everything is coated.
- Pour into the prepared tin, level off and leave to set in the fridge (I left mine overnight). The recipe suggests a couple of hours.
- Melt the remaining chocolate and spread it over the biscuit/chocolate base. Place back in the fridge to harden and then cut into pieces.

- I found that the remaining 100g of chocolate was not enough to cover the whole surface area of the rocky road, and certainly not to cover it and give the depth suggested by the accompanying picture (don't you hate it when the pictures lie to you...). I'd suggest at least 150g extra for the topping, and more if you want a decent layer.
- To cut the hard rocky road into neat squares, boil a kettle full of water (or use hot water from the hot tap) and pour over the blade of your knife. Working quickly, dry the blade and make the first cut. Wipe the melted chocolate off the blade and you may have enough heat to make a second cut. Again, wipe the blade, and then run more water over it to heat it up again and repeat the process until your rocky road is cut up. 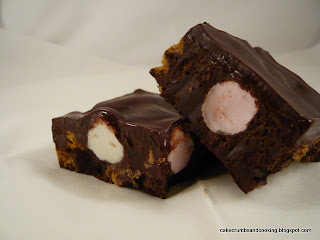 Were they yummy? Yes. I think it goes without saying that the end result here is the product of the quality of the ingredients you use and I used Green and Black's Cooking Chocolate for both the milk and dark parts. Obviously, use your favourite, I happen to like G&B! Infinitely customisable - use your preferred biscuits, dried fruit and ratio of dark:milk chocolate to suit your tastes. I liked the different textures - melty chocolate, crunchy biscuits, soft marshmallows and chewy raisins - it all worked really well together. I think cranberries would work well too, or crystallised ginger.


Would I make it again? For myself, probably not - I'm lazy and it's easier to just have a few squares of chocolate, a handful of raisins and a couple of biscuits by my side and graze on them all simultaneously. Or I might make Delia's Fruit and Nut cases again - they're very tasty and less faff (and they are delicious straight out of the freezer). However, these would probably make a good gift and were very tasty!

Since this rocky road is based on ginger biscuits I'm going to enter it as a rather last minute entry for the One Ingredient challenge, which this month is Ginger. Yum, I do love ginger! One Ingredient is hosted by Laura of How to Cook Good Food and Nazima of Franglais Kitchen. Nazima is the host this month.
Posted by Caroline at 19:00

It seems as though Rocky Road and Tiffin have merged into one over the years and pretty much anything goes. I love it in pretty much any form - as long as it isn't made with margarine. Your sounds so good and warming with the ginger biscuits and I would love a piece now.

Hope you have a wonderful 2013

I was going to make a comment similar to Choclette's - it's difficult to see where Tiffin and Rocky Road differ these days. Your version sounds delicious - I would have added some more crystallised or stem ginger along with the fruit, but the more the better where ginger is concerned, for me!

Rocky road is very common in Australia, so I am amazed you've lived so long without having it! Ours never has biscuits in it, but always marshmallows. Using ginger biscuits sounds lovely!

Mmmm, rocky road (drool)! I do love rocky road although it has to be one of the unhealthiest foods known to man. ( But there is fruit in it I suppose ;-) ) I love the idea of using ginger biscuits and quite frankly, anything containing marshmallows is a win in my book.

Wow, rocky road with ginger biscuits, that's a new one to me! It looks delicious, C! Hope you have a wonderful 2013! xx

This looks amazing! Ginger makes nearly everything better - I definitely have to try this.

these sound delicious and you really did cut them so cleanly that they look very pretty - and I have a packet of gingernut snaps at the moment that needs to be used ...

Ginger makes everything better. Love the idea of adding it to rocky road.
Your photos are lovely!

looks great - i love anything with ginger so even better!

This is so pretty. The chocolate looks so lovely and glossy. Must be a great treat. Thanks for linking to one ingredient! I am a little slow but am finally doing my roundup post so will link back to this post! :)