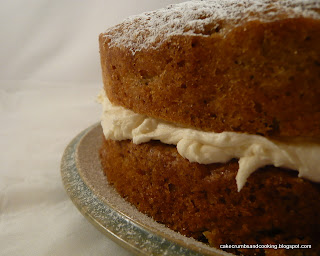 Well, this month is the first birthday of the Tea Time Treats challenge, hosted by Karen of Lavender and Lovage and Kate of What Kate Baked. So to celebrate, Karen is hosting this month with the theme of Cake. What could be more appropriate for a birthday celebration than cake? I knew when she announced it exactly which cake I was going to make... 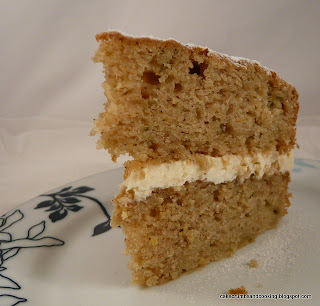 A few years ago BBC Good Food magazine was celebrating its 20th birthday and ran a competition to create a recipe for a suitably celebratory cake. There were lots of entries and the winners and runners up in various categories were chosen (and all look delicious). This Parsnip and Maple Syrup Cake was in the magazine (November 2009) as a finalist but ended up as the winner, and deservedly so. The other two finalist's cakes were a Coffee Crunch Cake and a Salted Caramel Chocolate Cake. Yum!


I've actually made this cake before, a couple of years ago and never got round to blogging it, so this was a great excuse to make it again and remind myself of just how delicious it really is. My colleagues are generally open minded when it comes to trying the various different cakes that land on the tea-room table (they don't get a say - I bake what I want and they can choose to eat it if they want, or ignore it if they want) but I did wonder whether they would draw the line at parsnip in a cake. So it went on the tea-room table as 'Mystery Cake - can you guess the ingredients?'. It was good fun - all through the day I had people coming up to me with random suggestions of what was in the cake - some correct answers and some slightly wild suggestions which amused me greatly. 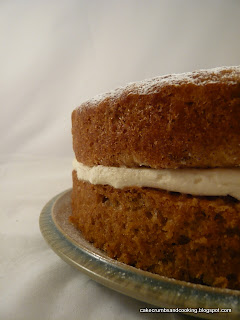 I did change the recipe slightly. I can't use pecans so I omitted those, I used a small pear rather than an eating apple and I omitted the zest and juice of the orange specified. I'm struggling to remember whether I replaced it with lemon, but I don't think I did. This is a cake that is more than the sum of its parts - perfectly balanced in flavours. There isn't a parsnip taste at all (in the same way that carrot cake doesn't taste of carrot) but oddly, there isn't a maple syrup flavour either. Quite a bit of syrup is used in the cake, and I'm sure that it contributes to the overall effect but it is the one ingredient that none of my colleagues picked up (quite a few said cinnamon - which is in the mixed spice) and a number suggested citrus - lemon or lime (which I don't think I used) but perhaps they were foxed by the strips of grated pear skin which was green and after suggesting various vegetables (the texture gives it away) some people said parsnip. I used a vanilla buttercream for the centre of the cake (50g butter, about 150g icing sugar and a tsp vanilla extract, made in the usual way). The texture of the cake is outstanding though - really moist and quite close, yet light too. I think this is quite a common feature of vegetable cakes - the moistness but without accompanying heaviness. The cakes are quite delicate when baked, so be careful when turning them out. 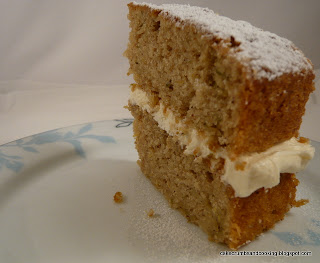 Great minds think alike though, as Suelle at Mainly Baking has already blogged this cake as her entry to TTT. However, because I think it's such a lovely cake and definitely deserves to be promoted and made by more people I'm blogging it as my entry too. So I guess I could sum up this entire post in one short sentence: Make and eat this cake, you won't regret it!

This cake looks quite different as a layer cake; your version looks lovely. I'm sure, with your changes, it probably tasted different too!

That's funny. Of all the cakes to make, you and Suelle choose the very same one and an unusual one at that. Your photographs look lovely C and the cake looks really moist and light. I made a parsnip cake a while back and thought it was good, but can't quite remember what else I put in it - chocolate I expect ;-)

Looks so delicious.I would devour a slice.:)

Looks fabulous! I want to reach in and pinch a slice, I;ve made this cake too and it was one of the best cakes ever. Really want to make it again now.
What other ingredients did your colleagues guess was in the cake?

It looks wonderful and so light. I haven't tried parsnip in a cake yet. I must keep it in mind :)

I was reading this and thinking how familiar it sounded, then realised had seen it too on Sue's blog. Your sandwich version looks equally delicious, is definitely one I want to try!

Looks amazing - I have bookmarked a couple of parsnip recipes (one of them being this one) but am yet to make them. Your yummy cake has motivated me to have a go!

What an intriguing combination of flavors!

Also, come check out my new blog party Pantry Party! I'm looking for lots of people to join, and I'd love to have you! http://lawstudentscookbook.wordpress.com/2012/11/27/introducing-pantry-party/

A DO love the combination of vegetables in this cake Caroline, and thanks so much for baking it for Tea Time Treats! Karen

i was the looking for the same and related info, what you describe on your article. And found you through google search. Its helps me a lots and i understood that you are one of skill article writer/ blogger. I have book marked your blog and hope to visit again to learn more. Thanks for your valuable efforts and time.

I have been away from the cake too long! Just admiring all your wonderful cakes and this one sounds amazing. Happy New Year to you Caroline!

Sue - it's surprising how the shape of a cake can change it so much!

Choclette - The cake is lovely and light yet moist - it's such a good cake. Yes, I guess you would have added chocolate - I bet white chocolate would go well with these flavours.

Katie - one of the best cakes ever is a good way to describe it! They guess cinnamon and a few other things too. Quite a few recognised the vegetable cake texture.

Jac - I'd definitely recommend it.

CC - Oooh, I'll look forward to seeing your version then.

Karen - it's a great cake and I thought two versions wouldn't go amiss for TTT.

Joanna - I think this is definitely one of the best cakes I've made, I'd recommend it as a reintroduction to cake ;-)