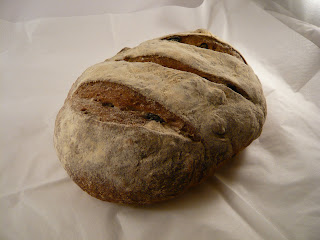 I tend to have bread in some form (usually buttered - everything is better buttered, aside from cheese sandwiches...) for my breakfast and occasionally have a desire to change the flavour of my bread - I went through a long period of dried apricots, and then a long period of dried cranberries and decided it was time to branch out and ring the changes again. As you can see, there is a dried fruit theme running through my favourites and I thought that a return to basic raisins was definitely called for. However, there is currently a little bag of cinnamon sitting on my counter top, influencing everything I bake it seems. So a little of that had to go in. And in a nod to healthy eating (and fitting in with my current love of crunchy wholemeal breads) it wasn't difficult to make this bread partly wholemeal. It isn't an enriched or particularly sweet dough, other than the sweetness provided by the raisins and the 'sense' of sweetness given by the cinnamon (as someone who only ever eats cinnamon in sweet dishes, it tricks my mind into tasting sweetness even where there isn't really any!) 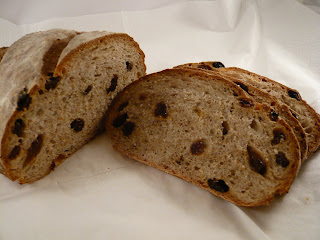 I'm sending this bread over to Helen at Fuss Free Flavours (what an amazing blog - be sure to visit!) for Breakfast Club: Because breakfast should be more interesting than tea & toast or coffee & cereal. The theme this (extended!) month is bread.
My kneading pattern happened to fit in with what I was doing that day - I'm sure other kneading patterns will work just as well as this, just make sure the dough is well risen before baking.
Raisin and cinnamon bread
Ingredients
75g strong white flour
75g strong wholemeal flour
75g plain white flour
60g raisins
1/2 tsp cinnamon (or to taste)
scant tsp salt
scant tsp instant yeast
Method
- Place all flour in a bowl with raisins, cinnamon, salt and yeast. Mix well to combine.
- Add around 160ml warm water and mix well to combine. You may need a little more water.
- Abandon the dough for about an hour.
- Knead the dough briefly for about 20-30 seconds on an oiled surface, shape into a ball and leave again for around 30-40 minutes.
- Shape into your desired loaf shape - I'm liking the stubby loaf shape pictured at the top of the post.
- Leave to rise for around 40-60 minutes, depending on temperature.
~~~
-When it's nearly time to bake, preheat the oven to gas 7/220C and put a tray of boiling water onto a low shelf.
- Dust the loaf with flour, and slash with a sharp (or bread) knife.
- Place in the oven and bake at gas 7 for 10 minutes. Reduce the heat to gas 6/200C and bake for a further 20 minutes before turning upside down to crisp the base for the remaining ten minutes. The loaf should sound hollow when cooked.
- Allow to cool completely on a wire rack before slicing. 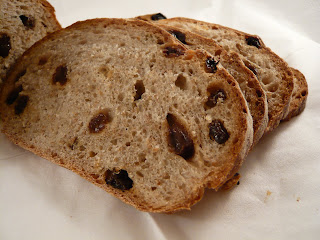 I've been enjoying this bread greatly for my breakfasts - it's so nice to feel like you have a treat to look forward to at breakfast time instead of dusty museli or boring cereal and the juicy raisins are a real treat - even the caramelised ones on the crust of the bread add to the flavour!
Posted by Caroline at 18:45

Breakfast perfection! Love the sound of this bread and I agree with Katie, it is totally artisan!

Your bread looks just perfect - wish I could produce a loaf like that.

Now that's an impressive loaf - anything with cinnamon and raisins is always going to get me drooling!

Great looking loaf, C! I could use a slice of that right now for breakfast..

lovely bread - I'm a great believer in having exactly what you want for breakfast, it sets you up in the right frame of mind !

BG - thank you. I'm sure you could make bread like this, it's not too difficult although I have to admit that my bread making has improved over the past year or so.

CC, Jac, thank you both.

Celia - you'd be welcome to some, but it's not a patch on what you can make!

Joanna - precisely. If I had to suffer boring breakfast that was a penitence I'd be grumpy all day!